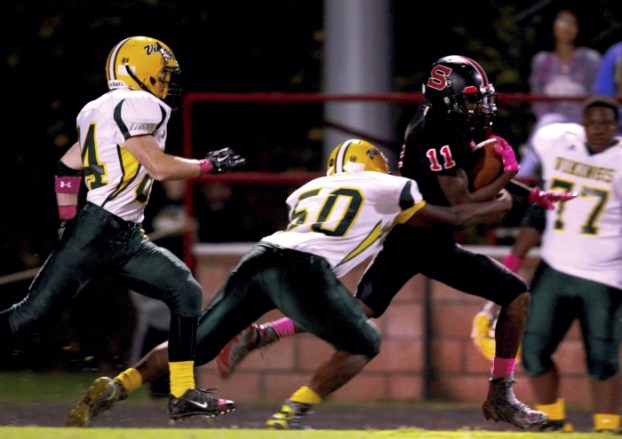 Prep football notebook …
NORTH ROWAN
The Cavaliers worked on ball security for a solid week.
Practice lessons carried over to Friday night.
The Cavaliers finally played a turnover-free game, and taking care of the football was instrumental in a 13-0 win against West Davidson that elevated North (3-5) to 2-0 in the CCC.
“We still hurt ourselves some with penalties, but we conquered the turnover battle,” North coach Ben Hampton said. “We had 300 yards of offense and no turnovers.”
•••
North’s defense registered its first shutout since the 2013 season when it blanked Thomasville, Salisbury and Surry Central (first round of the playoffs) on consecutive weeks.
“Our defense gave our offense great field position all night,” Hampton said.
•••
Young North Rowan backs Jaleel Webster and Jayden Jones had their most productive games against West Davidson. Webster, a sophomore, had 16 carries for 82 yards and a TD. Jones, a freshman, had 10 carries for 67 yards and a TD. Jones was named North’s offensive player of the week.
“They both had the kind of games we believe they can have,” Hampton said. “They came out their shell a little bit.”
•••
North owns its first two-game winning streak under first-year coach Hampton and is 12-0 in CCC games the past three seasons.

WEST ROWAN
West QB Kacey Otto continued a strong season in the televised, 28-7 win over East Rowan. He had three touchdown passes in a game for the first time.
Otto is completing 67 percent of his passes as a senior, after completing 44 percent as a junior.
He’s been the county’s most consistent offensive performer. He’s thrown for 923 yards, while rushing for 565. He’s accounted for 15 touchdowns (four rushing, 11 passing).
Otto has 25 career TD passes. While his completion rate has soared this season, his interception rate has dropped. He threw 11 picks last season, but just three so far this season.
Otto has 3,133 yards of career total offense. He’s the eighth Falcon to reach that plateau. The others: K.P. Parks. B.J. Sherrill, Tim Hogue, Dinkin Miller, Wade Moore, Bryan Aycoth and Joe Jackson.
•••
Otto has been aided by throwing to the county’s two leading pass-catchers.
Kortez Weeks has 498 receiving yards and seven TDs. Weeks’ big game against East (eight catches, 117 yards, two TDs) put the junior over 1,000 receiving yards for his career.
Jon Crucitti’s 1,848 career receiving yards in 2008-09 is the record at West, and Weeks may have a shot at it.
Juwan Houston has 455 receiving yards and six TDs this season and is averaging an astounding 18.9 yards per catch.
Kameron Caldwell has 11 catches and made a season-high three receptions against East.
•••
Coach Joe Nixon said tackle Devin Turner, end Dearius Phillips and cornerback Deyquan Byrd were outstanding in West’s latest strong defensive effort.
•••
West (7-1, 6-0 SPC) has won seven straight, lifting coach Joe Nixon’s career head-coaching record to 38-9.
In his fourth year as a head coach, Nixon, who had three strong seasons at North Rowan, is tied with former North coach Avery Cutshaw for 13th place on the county’s all-time wins list. Cutshaw was 38-35 in six seasons.
Nixon’s lifetime record in conference games is 22-1. His slate includes 19 straight victories since North’s 29-22 1A Yadkin Valley Conference loss to Albemarle on Oct. 5, 2012.
•••
West faces its biggest challenge of the season Friday when Concord visits Mount Ulla. The Spiders haven’t lost a league game the last three seasons, so a long conference winning streak is going to end, either for Nixon or Concord.

SALISBURY
Friday will mark the 100th anniversary of Salisbury’s first high school football game.
On Oct. 23, 1915, Salisbury got prep football started in Rowan County with a 57-0 home loss to Greensboro.
•••
With backs Willie Clark and Juan Fair out of action, workhorse Antwond Glenn carried the ball a career-high 32 times in Friday’s 17-14 CCC loss to Lexington.
Glenn’s previous high was 24 carries against Surry Central in a win this season and he also had 24 against South Iredell in a victory last season.
With Matt Woolly and Marquese Peele leading the blocking, Glenn produced 124 rushing yards Friday for the seventh 100-yard game of his career.
Glenn had 203 yards on 22 carries against Lexington last season.
Glenn leads Rowan County with 121 carries. He has 572 rushing yards.
The Hornets (2-6, 0-2 CCC) expect to have Clark back in action Friday. Fair, injured in the Surry Central contest, may not make it back this week.
•••
Salisbury’s defense continues to be firm against the run. The Hornets haven’t allowed more than 122 yards rushing in any of their last five games.
Carson is the only team to top 200 rushing yards against the Hornets this season.
•••
Daniel Coats recovered a fumble against Lexington, the 19th fumble recovery for the Hornets this season.

SOUTH ROWAN
Not much went right for South Rowan (0-8, 0-6 SPC) in Friday’s 45-0 loss to Central Cabarrus, but first-year coach Daniel Yow is excited by the progress shown by 6-foot-2, 190-pound sophomore receiver Daevonne Harris.
“He understands we’re a run-first team, and he did a great job blocking on the edge against Central,” Yow said. “He did such a good job blocking that we tried to throw the ball to him a couple of times late in the game. We wanted to reward him with a touchdown because he was the guy who had gotten us down there.”
•••
Tyler Rary missed the first two games this season after he had thumb surgery, but Yow said he’s emerged as the Raiders’ go-to-receiver.
Rary has made 10 catches in South’s last four games. His biggest outing was five catches for 65 yards against Carson.
•••
South’s next two games are on the road against two of the SPC’s stronger teams (Hickory Ridge and Robinson), so it might get worse before it gets better.
The Raiders have been out-rushed 2,518 yards to 378 and outscored 307-80, but Yow has managed to stay as positive as he was in August.
“The game plan is to fight every week, get better every week and get ready for next year,” he said.

EAST ROWAN
Keith Tillman’s explosive, 55-yard scoring run in the first quarter provided the only offense for the Mustangs in a 28-7 loss to West Rowan on Thursday.
It was the first rushing TD for the junior since his four-TD night against Salisbury on Aug. 28.
•••
West was the third team this season to hold the Mustangs (2-6, 1-5 SPC) under 100 passing yards. East was held under 200 passing yards only four times last season.
•••
East receiver Naquis Caldwell got off to a torrid start this season, but defenses are giving him a lot of attention. He has five TD catches, but he’s been kept out of the end zone since the Concord game on Sept. 4.

CARSON
Owen White and Austin Lear had rushing touchdowns for the Cougars in Friday’s 35-14 loss to Concord.
Lear has scored six touchdowns this season. His 72 rushing yards provided most of the offense Carson mustered against the Spiders.
Fullback Dylan Livengood had 49 rushing yards, but Carson didn’t complete a pass in 10 attempts.
•••
Carson (4-4, 2-4 SPC) still has a good chance at a 6-5 regular season. The Cougars are favored Friday against Northwest Cabarrus (2-6, 2-4) and they’ll close the regular season against Cox Mill (2-6, 2-4). In between those games, the Cougars will be underdogs at home against Hickory Ridge.
•••
Carson allowed a season-high 227 passing yards against Concord.
Linebacker Alex Deal led Carson’s defense with nine tackles.

DAVIE
Davie’s season (3-6, 1-3 CPC) hasn’t been spectacular, but the War Eagles’ passing game numbers have been.
QB Chris Reynolds and receivers Ben Ellis and Cooper Wall seem to raise the bar each week.
Reynolds threw for 369 yards in Friday’s 45-28 loss to North Davidson. For the season, the junior has 148 completions, 21 touchdowns and 2,112 passing yards, plus 460 rushing yards.
Wall, a sophomore who also has a big basketball future, had his biggest game so far on Friday when he made nine receptions for 173 yards and his sixth TD.
Ellis, a senior, has 63 catches for 919 yards and 13 TDs and will own every school receiving record when he graduates.
Of course, Wall may eventually break Ellis’ records.
•••
Reynolds found new receivers for touchdowns, as Mitchell McGee (12 catches, 236 yards) and Beau Byerly (14 catches, 139 yards) found the end zone for the first time.
•••
Davie is off on Friday.

A.L. Brown
Sandon McCoy surpassed 2,500 rushing yards for his career on Friday. McCoy has been a workhorse for three seasons and has 453 carries. McCoy scored eight rushing TDs as a sophomore. He had eight more as a junior, and he got his eighth of this season on Friday, backing into the end zone from the 2-yard line.
•••
In the MECKA, there’s no down time. After dropping a 21-7 struggle at home with Hough, the Wonders go on the road Friday to Mallard Creek, two-time defending 4AA state champ.
In this week’s Associated Press poll, Mallard Creek is ranked fifth in 4A. Hough is seventh. The Wonders (7-1, 2-1 MECKA), who have been in the poll the last three weeks, are 10th.
•••
A.L. Brown’s defense is allowing 13.4 points per game. That’s quite a contrast to 2014 when the Wonders surrendered 25.5 points per game.