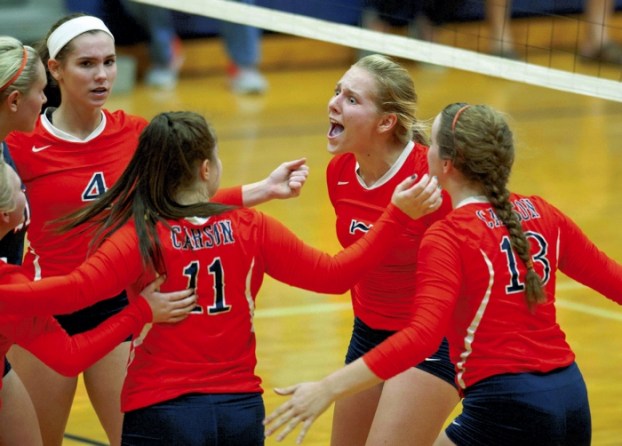 CHINA GROVE — The intensity level was high the last two times Carson and Cox Mill battled on the volleyball court this season but there was a lot more at stake Wednesday night in the Cougars’ gym with the South Piedmont Conference Tournament championship on the line.

The top-seeded Cougars survived a marathon first set, 29-27, then scored the critical points down the stretch on the next two sets to win, 25-22 and 25-23, sweeping the Chargers for the title.

Carson (25-2) advances to the first round of the state 3A playoffs this Saturday with a home match against an opponent to be announced, while Cox Mill (25-2) will also be a high seed in the upcoming playoffs. The only two losses for the Chargers this season came at the hands of Carson, once on the last day on the regular season and then again last night.

“I think we always push hard, keep fighting and never give up,” senior Morgan Hester said after her team fought off seven set points in the opening set to prevail, 29-27. “It really showed in that first set, when we were down by that much and came back to win.”

Carson led much of the early portion of the first set but Cox Mill came to life behind their powerful front line of Taylor Rowland and Alison Siersma, who led a late surge to build a 24-19 margin. Instead of folding, Carson showed their character and defensive skills by reeling off four points in a row to tie the score at 24-24 as Elena Turnbull and Madison Barnhardt notched kills. It was still tied at 27-27 when the Carson front line blocked a shot to go up one then clinched the set with an ace by Turnbull.

While the first set win by Carson established the tone for the rest of the match, the final two sets were just as difficult and were in doubt to the end. Carson led, 6-1, early in the second set but Cox Mill battled back to lead, 19-17.  The score was tied at 20-20 when back-to-back blocks by Mallory Weast and Turnbull gave the Cougars enough of a margin to post a 25-22 win.

Set three followed a similar pattern as Carson led, 20-17, only to have the Chargers battle back to tie it at 23-23, thanks to Rowland’s 15th kill. The Cougars responded with a long return by Sarah Boyd for 24-23, then the match winner from Turnbull on a finesse shot at the net that fell in front of the Charger front line.

Carson players cited solid team defense as well as a loud and boisterous crowd that kept them inspired throughout.  “This whole school is so involved in supporting all our sports,” noted sophomore Lindsay Elmore who had four key blocks and eight kills in the match. “Just them coming out and getting us so hyped tonight made it a lot of fun.”

Senior Jordan Osborne, who played on both of Carson’s state finalist teams in 2012 and 2013,  feels this year’s team is much stronger defensively. “We just don’t let the ball hit the floor,” she said. “We are a whole different team. We have good movement but our defense is what we do best. We also have practiced a lot for the pressure situations we faced tonight.””

On the opposing bench, Cox Mill coach Michelle Phillips felt her team was not aggressive enough when it counted. “Defensively, I feel like we should have been more aggressive in the backcourt, ” she stated. “But that was a very tough match. It was supposed to be a battle and it was a battle and they came out on top.”

The state 3A volleyball playoffs open this Saturday with Carson’s home opponent and the time of the match to be determined. There will be four rounds leading to a regional final with the state championship set for Nov. 7 at the Raleigh Convention Center. Carson coach Kelan Rogers believes the tough battle for the SPC championship showed him that his team has the character and ability to come through in close matches.

“We can really play when we set our minds to it,” Rogers said. “This team is really good and we talked to them at the beginning of the season about how good we could be.  I think our whole team believes that now and I hope it continues in the playoffs.”

By Mike London mike.london@salisburypost.com SALISBURY — You have to smile when Salisbury tennis players talk about a comeback. “We like... read more