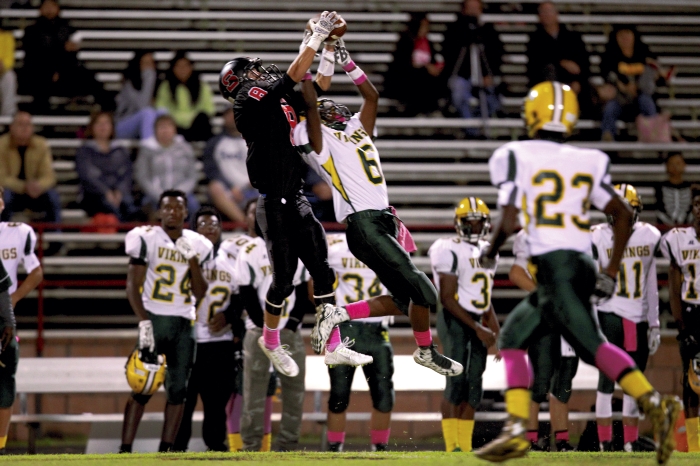 Central Cabarrus’s Terron Gregory (6) goes up to break up a pass to South Rowan’s Tyler Rary (8). Photo by James Sipes, for the Salisbury Post.

LANDIS — Central Cabarrus not only put a damper on South Rowan’s homecoming Friday night at Donnell Stadium, they also put on an offensive clinic.

The Vikings produced a relentless string of time-consuming, yard-crunching drives throughout the game and coasted past the Raiders 45-0. Despite the fact that both teams are at the bottom of the South Piedmont Conference standings, it was a mismatch from the beginning last night as the Vikings (3-4, 2-4 SPC) snapped a three-game losing skid in impressive fashion. The Raiders’ season of frustration continued as they fell to 0-8, 0-6 in the SPC.

Central Cabarrus quarterback Tyler English lived up to his dual threat reputation by rushing for 105 yards and passing for 121 more. The senior missed last week’s game with a concussion but bounced back strong against the Raiders with three rushing scores and a pair of touchdown passes. The Vikings held South to just nine offensive plays in the opening quarter and built a 20-0 lead, then expanded the margin to 37-0 by halftime. By the end of the third quarter it was 45-0 with a running clock at that point bringing the game to a mercifully quicker conclusion.

First-year Raider head coach Daniel Yow was well aware his defense spent far too much time on the field. “We knew coming in that they were going to put as many bodies as they could at the point of attack,” he said. “They did just that and did it well. They were able to gash us all night and must have averaged at least eight yards a carry.”

Actually, the Vikings posted a remarkable 53 carries for 354 net yards with nine different runners combing for an average of 6.7 yards per carry. English topped the list with his 105 followed by sophomore Jahari Young with 95 and junior Demarcus Alexander with 88 bruising yards in the first half before leaving with an injury.  By comparison, the Raiders managed just 79 yards of total offense for the game with eight first downs compared to 28 for Central.

The Vikings set the tone right from the beginning with a 68-yard drive behind the running of English and Alexander. Trey Robinson capped the drive with a three-yard dive and a 7-0 lead. English then went to the air for a pair of touchdown passes in the first period for the 20-0 lead. The first covered 11 yards to Joseph Dorton in the right corner of the end zone. Then slot receiver Terron Gregory out-battled a Raider defender for a long pass at the two and trotted into the end zone for a 34-yard score.

Central opened the second quarter with another dominating 13-play, 87-yard drive that used almost five minutes off the clock. English pushed in from the one on the sneak for a 27-0 margin. One series later, English repeated the trick from the one to make the score 34-0. The Vikings then concluded an almost perfect first half with a 41-yard field goal by Derrick Morales as the halftime horn sounded.

Midway in the second half, the Viking defense had South backed up to their own four and pounced on Raider quarterback Heath Barringer in the end zone after a bobbled snap to notch a safety, making it 37-0. They closed out the scoring in the waning seconds of the third quarter on another short English run. It was a play that clearly demonstrated this was the Viking’s night. With the ball at the two, Robinson dove toward the end zone but the ball popped free and bounced right back to English at the two. He calmly scooped it up and trotted into the end zone for the 45-0 lead.

The best offensive threat of the night for South came in the fourth quarter as Barringer completed passes of 14 yards to Tyler Rary and 18 to Mike Parks. A 13-yard Barringer run put the ball at the Vikings’ 7 but four straight incomplete passes ended the threat with just over 4 minutes remaining.

“We just have to motivate ourselves to get better,” receiver and linebacker Austin Chrismon noted after his solid performance on both sides of the ball. “Everybody on this team wants to play hard and we want to win but we just have to get better. We are looking forward to next week so we will work our butts off and try to get a win.”

The Raiders will try again to crack the win column next Friday with a road trip to Hickory Ridge in Harrisburg.