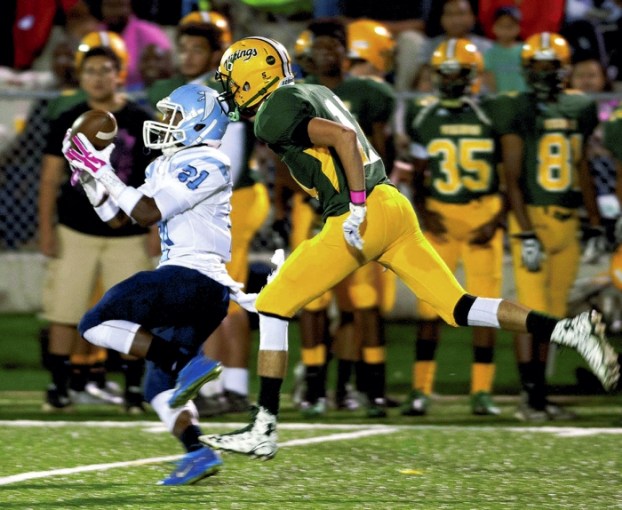 JON C. LAKEY / SALISBURY POST ... West Rowan’s JT Sanders (21) intercepts a pass that was intended for Central Cabarrus’ Joseph Dorton (11). The Falcons came alive after being down 14-0 in the first quarter and won, 21-14, their sixth consecutive victory.

CONCORD — West Rowan kept pace in the South Piedmont Conference derby Friday night, but none of it was easy.

The Falcons overcame an early two-touchdown deficit, then relied on their staunch defense to preserve a 21-14 victory at Central Cabarrus.

“When you’re in the middle of the conference season, there’s no such thing as an easy win,” coach Joe Nixon said after West (6-1, 5-0) secured its sixth consecutive triumph and remained tied for first place with Concord. “I feel good about this. We got a win on the road in the conference.”

They got it because their take-no-prisoners defense produced a pick-six in the first half, a blocked punt in the second and forced four turnovers. And because fearless quarterback Kacey Otto passed for 83 yards, ran for another 88 and lobbed a perfectly placed touchdown pass to Juwan Houston for the decisive score.

“This was definitely a tough game to win,” cornerback JT Sanders said after wreaking havoc in the secondary all night. “But if we win all those tough moments, we can win the tough games.”

This one took some doing. Central (2-4, 1-4) gave its Homecoming crowd a couple of early thrills by scoring on its first two possessions. The first came following an interception return to the West 39-yard line and a 31-yard pass play from quarterback Cameron Kepley — who was subbing for injured starter Tyler English (concussion) — to wideout Joseph Dorton. Two snaps later, Kepley scrambled out of the pocket and into the end zone on a broken play.

“I think they came out ready to play,” said West’s Theo Fisher. “And sometimes when we face adversity, we sort of give up for a little while. Then something kicks in and we become a team again.”

They faced more adversity when Central junior Demarcus Alexander took a handoff, burst into West’s secondary and raced 53 yards for a touchdown that put the hosts ahead 14-0 with 3:02 remaining in the first period.

“We knew we still had a lot of football to play,” Nixon said. “We told the guys to settle in, relax and just play. Then our defense made a huge play that swung the momentum.”

He’s talking about Jai Hogue’s 69-yard interception return for a touchdown that tied the score midway through the second quarter. But first came a six-play scoring drive directed by Otto — who alternated turns at quarterback and running back. He called his own number on a 2-yard keeper that made it 14-7. Two minutes later, Hogue stepped in front of a pass and sped down the left sideline for a game-tying TD.

“I was watching the quarterback’s eyes and he didn’t look me off,” said Hogue, a 6-foot-2 junior DB who also forced a fumble. “So I backpedaled, did my t-step and broke for the ball. Then all I saw was green.”

West’s defense, which yielded only 147 yards and six first downs, made another film-at-11 play as the second half unfolded. On fourth-and-long, Central punter Boris Tope-Tiandem had a kicked blocked by a teammate, though Fisher got credit for the rejection.

“I came in from the left side,” he said. “And I pushed their man all the way to the ball. It was blocked with his back.”

It also gave West a first down on the Central 14. On fourth-and-3 from the 7, Otto found Houston wide open on a cross pattern in the right corner of the end zone.

The rest was up to West’s defense, which allowed only 35 yards and forced three turnovers in the second half. Key plays included defensive tackle Craig Mattison’s 8-yard sack as the third quarter expired and DE Tyler Wheeler’s fumble recovery with 1:58 to play.

“Your force four turnovers and one of them goes for a score,” Nixon said afterward. “And another one was in the red zone with our backs against the wall. It was like all 11 guys on the field, no matter what combinations we used, played their hearts out.”

Back on track: Cavs halt losing streak with CCC win over Lexington