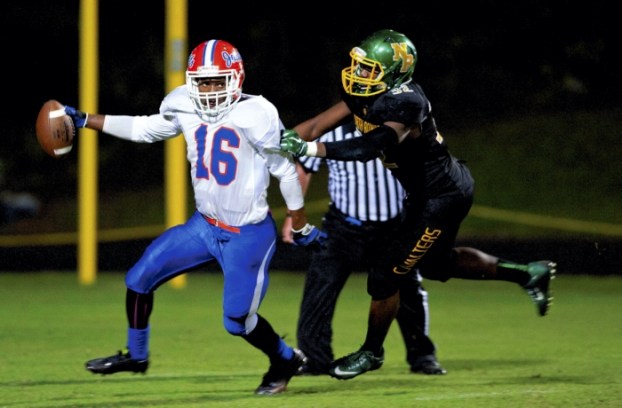 Back on track: Cavs halt losing streak with CCC win over Lexington

SPENCER — Even when it doesn’t look good, winning still feels good, and North Rowan players and coaches managed smiles after a penalty-plagued, turnover-marred 18-13 win over Lexington last night.
After all, it’s a new beginning for a rebuilding North Rowan team that went 1-5 in non-conference play and had dropped five straight since a victory at East Rowan opening night.
“We played a tough non-conference schedule, but no one here was happy at all with 1-5 because we felt like we should’ve been at least 3-3,” first-year North Rowan coach Ben Hampton said. “But now we’ve got a fresh start. We’ll go from here.”
A struggle in which no offensive touchdowns were scored in the first half, kicked off the 2A Central Carolina Conference season for both teams. It wasn’t decided until North defensive back Chris Clodfelter made his second interception of the night to stop Lexington’s final chance. Clodfelter made a leaping catch of a throw by Lexington’s dual-threat QB Daniel-Reid Bennett, who desperately tried to make something happen on third-and-15 from the Lexington 25 with 1:21 remaining.
“I give Lexington respect for having good athletes and I give them credit coming in here with a lot of intensity and making this a great game,” Clodfelter said. “On defense and special teams, when we had the opportunity to make plays, and we made them. Our offense had some mistakes and some turnovers, but that’s OK. We have their back.”
Defending CCC champ North overcame five turnovers. Lexington had three. Both teams were assessed more than 100 yards in penalties.
The pivotal play was North Rowan’s block of a Lexington punt with nine minutes left when the Yellow Jackets (4-2, 0-1 CCC) led, 13-12. Dalynn Cuthbertson made the block with assists from Omar Lipscomb and Zion DeBose and Eric Gibson made the recovery inside the Lexington 2-yard line.
“Blocking a punt was something we’d practiced all week,” Gibson said. “It was one of those unforgettable plays. It’s my senior year, so I’ll remember it.”
The punt block set up a short TD run by Xavier Haley with 8:40 remaining, and North Rowan’s defense was able to close things out.
North (2-5, 1-0 CCC) took a 6-0 lead on a pair of first-quarter field goals by Jacob Young, including an impressive 42-yarder, and appeared in complete control early.
“We dominated upfront on both sides of the ball,” Hampton said. “Our defense has been solid all year, and it was lights-out again tonight. But we’ve got to find a way to limit our turnovers.”
North was ready to make it 9-0 or 13-0 in the second quarter when Reid-Bennett made a play on defense for the Yellow Jackets that stunned the crowd. North back Xavier Haley had picked up first-down yardage near the Lexington 20 when he lost the ball. Bennett plucked it out of the air and raced 79 yards for the touchdown that gave the Yellow Jackets a 7-6 lead.
North self-destructed to stop a nice drive to open the second half, but the Cavaliers forced Lexington to punt from its 7, got a short field, drove 35 yards and punched in a go-ahead TD on a 1-yard run by sophomore QB Josh Ellis with 2:35 left in the third quarter.
Momentum swung back to the Yellow Jackets in the final minute of the third quarter when North Rowan was bunched up in the middle to stop a fourth-and-1 play, and Lexington got speedster Sakeem McIntosh to the edge with a pitch to the left. McIntosh outraced the Cavaliers for 37 yards to the end zone for a 13-12 lead.
After the blocked punt put North back on top, Bennett still caused concern when he broke a 39-yard run to the North 25 with four minutes left.
But that’s where the Cavaliers dug in. North took over on downs at the 22.
North had the opportunity to run out the clock by getting one first down, but Lexington got a stop and forced a punt.
Clodfelter’s interception finally sealed it for the Cavaliers.
Lexington got interceptions from ace receiver Jerarmony Charles and Majesty Allah. Dylan Tucker and Cannon Sean had fumble recoveries.
Gibson forced a fumble for North, and Javin Goodine made the recovery.
“We knew Lexington had a good defense and our offense might struggle some,” said Lipscomb, North’s veteran linebacker. “But offensive turnovers are never an excuse not to win the game. We kept pushing.”

By Mike London mike.london@salisburypost.com SALISBURY — Anyone looking for a few good men could have found them at Dan Nicholas... read more