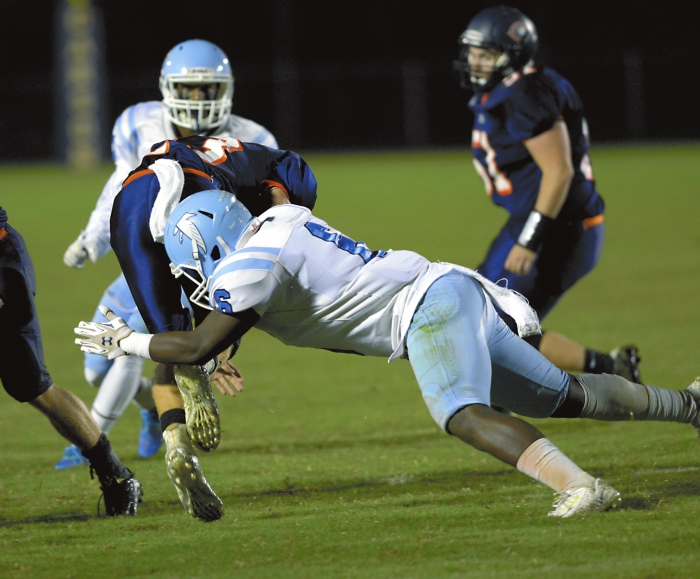 Prep football notebook …
West Rowan offensive lineman Hezekiah Banks’ selection to the Shrine Bowl squad means that nine of the last 17 Rowan County players chosen for the all-star game since 2000 have come from West.
Banks joins a list of West standouts that includes linebacker James Francis (2000), defensive lineman Tristan Dorty (2006), offensive lineman David Melton (2006), defensive lineman Chris Smith (2009), running back K.P. Parks (2009), offensive lineman Charles Holloway (2010), defensive back Domonique Noble (2010) and offensive lineman Hunter Mashburn (2011).
North Rowan has had four players named to the team since 2000, while East has had two, and Salisbury and Carson one apiece.
Banks was the only player selected, not only from Rowan County, but from the South Piedmont Conference.
“He’ll be representing our county and our league and that speaks volumes for him,” West coach Joe Nixon said. “This is the most prestigious all-star game. He’ll be practicing and playing against great players, and it’s an opportunity for him to open a lot of eyes.”
•••
Running back Jovon Quarles (80 carries, 355 yards, 5 TDs) sat out the 28-7 win against Carson with an ankle injury.
The Falcons hope to have him back in action soon.
With Quarles ailing, sophomore Martavio Rankin has stepped forward as the Falcons’ workhorse and has posted back-to-back 100-yard rushing games against South Rowan and Carson.
•••
While it hasn’t had a shutout yet, West Rowan’s defense has allowed just two touchdowns in the Falcons’ last three games. West hasn’t allowed a passing TD since the Robinson game on Sept. 11.
This has been the best three-game stretch for West’s defense since very early in the 2013 season.

Salisbury
Salisbury is coming off an open week. It was obviously a great week to be open with Hurricane Joaquin visiting, but the Hornets managed some wet practices. Coach Ryan Crowder lauded the practice efforts of receiver Will Steinman and offensive linemen Rondarius Peele and Matt Woolly.
The Hornets (2-4) finally start play in the six-team CCC with a homecoming game against East Davidson on Friday.
Expect the scoreboard to be active. Salisbury hasn’t scored fewer than 30 points against East Davidson since 2004. The Hornets led, 34-7, last season before hanging on to win, 34-28.
Willie Clark had a career game against East Davidson in 2014 with 158 rushing yards and three TDs.
•••
Linebacker Tywun Rivers is not expected to be available for the East Davidson game because he’s scheduled to attend a wedding in Jamaica.
•••
Salisbury’s 31-6 win against Surry Central in its last outing made the Hornets the second Rowan team to win this season against an opponent from outside the county. West has won four against non-Rowan teams.
•••
Salisbury hasn’t scored an offensive TD in any of its three road games, but the Hornets are 2-1 at home.

East Rowan
Playing in hurricane weather on Friday, East Rowan fell, 20-7, at Hickory Ridge.
The Mustangs (1-5, 0-4 SPC) lost five weather-related fumbles, bringing their staggering total for the season to 27 turnovers.
That’s 4.5 per game, and that making it impossible to win. East has gained nearly as many yards as its opponents (1,749 to 1,844), but losing the turnover battle, 27-13, has been deadly.
“We could be 5-1 right now, as well as our defense has played,” coach Kenneth McClamrock said. “Unfortunately, turnovers have been the story of our season.”
•••
Junior Max Wall had a good second half at Hickory Ridge and now has 2,136 career rushing yards.
Wall surpassed Rick Vanhoy for fourth place on East’s all-time rushing list on Friday.
Wall trails Joseph Patterson (2,365), Randy Fowler (2,485) and Cal Hayes Jr. (2,698).
•••
On paper, East Rowan has a good chance to win at Northwest Cabarrus on Friday. That’s a team the Mustangs destroyed last season, 50-6.
Still, the Trojans have shown serious tenacity in winning two SPC games by one point. That’s two more than East has won.
In its two road games so far, both losses, East has turned the ball over 13 times.
•••
East’s televised game against West Rowan is coming up next Thursday. The Mustangs didn’t expect to be going into it 2-5 or 1-6.

North Rowan
The Cavaliers are still sitting on 1-5 and a five-game losing streak.
Due to weather, North hasn’t played since losing at West Stokes on Sept. 24., but the Cavaliers will end their 14-day hiatus when they host Lexington tonight at 7:30 p.m. at Eagle Stadium.
North and Lexington were able to avoid Hurricane Joaquin. They both were open this week, so they simply agreed to move the game scheduled last week to tonight.
•••
North will be opening CCC play against Lexington. The Cavaliers are 10-0 in conference games since returning to the CCC prior to the 2013 season.
North is 23-15 all-time against Lexington.

South Rowan
Brennan Lambert kicked his seventh field goal of the season in the Raiders’ 27-10 loss to Cox Mill. That’s the most by a South kicker since Robby Basinger had 10 field goals in 2000.
•••
With QB Heath Barringer sidelined by a concussion, receiver Tyler Rary, who began the season on the injured list himself, took over at QB.
Rary didn’t have a big statistical night, but South coach Daniel Yow was pleased with what he was able to do.
“He played his heart out,” Yow said. “He did about everything we could’ve asked of him.”
Barringer has been cleared to play Friday when South (0-6, 0-4 SPC) goes to Carson.

Carson
Carson fullback Dylan Livengood is really good against West Rowan.
Carson lost to the Falcons, 28-7, on Thursday, but Livengood had 101 of Carson’s 117 rushing yards.
Livengood also had a big game against West last season. Livengood has 630 rushing yards the last two seasons, with 204 of them coming against the Falcons.
•••
Carson QB Owen White missed the West game with a concussion.
Cole Sifford was called up from the jayvee team to play quarterback and was 5-for-11 for 68 yards, a pretty good effort against the county’s top defense.
•••
Carson doesn’t throw a lot, but Brandon Huneycutt has been one of the county’s best receivers for the last three seasons.
Huneycutt had four catches for 66 yards against the Falcons. His career numbers are 45 catches or 843 yards and 11 TDs, and he has a good chance to become the fourth 1,000-yard receiver in school history.
Travis Hayes was the first one in Carson’s early days, and Cody Clanton and K.J. Pressley, both rank among the county’s all-time top five in receiving yards.

A.L. Brown
A.L. Brown’s defense limited Vance to 89 rushing yards in Monday’s 31-14 victory that propelled the Wonders to a No. 7 ranking in the Associated Press 4A state media poll. The Wonders hadn’t been ranked all season.
The Wonders shut out Vance in the second half and they’ve allowed only 27 second-half points all season.
West Rowan’s stout defense has nudged slightly ahead of the Wonders when it comes to yards allowed, but the Wonders’ defense has been quite a story. Against a schedule that has included four winning teams — Concord, Vance, Mooresville and North Meck — the Wonders have allowed 10.8 points per game.
Last season, the Wonders gave up 48 points to Vance and allowed 25.5 points per game.
•••
The Wonders (6-0, 2-0 MECKA) have matched their victory total for all last season when they went 6-6 and were a No. 15 seed in the 4A state playoffs.
•••
A.L. Brown QB Damon Johnson has thrown 10 touchdown passes and three interceptions. Johnson, a senior, has 38 career TD passes.

Davie
Davie’s passing combination of junior Chris Reynolds and senior Ben Ellis continued to shine even in a 45-29 loss to Reagan.
Reynolds threw for 305 yards for the War Eagles (3-4, 1-1 CPC), only the sixth 300-yard passing game in Davie’s 60-year history.
Reynolds threw four TD passes for the second time this season. He also accomplished the feat against Hopewell. Davie historian Brian Pitts said Garrett Benge (2006) and Brad Corriher (2005) are the only other Davie QBs to have multiple four-TD games in the same season.
Reynolds had 21 completions against Reagan, a career high.
•••
Ellis, who surpassed 100 career catches against Reagan, caught three TD passes and has 13 this season. He broke former Catawba football and baseball player Joe Watson’s Davie record of 12 in a season.
Ellis also has broken the school record for 100-yard receiving games in a career with nine. He’s accounted for three of the top six receiving games in Davie history.
Ellis’ 11 catches against Reagan tied the school record set by Chris Kinard in a 2006 state playoff game at Independence.