PFAFFTOWN — The 45-29 score in Davie County’s road loss to Reagan last night is a little deceiving. It was actually a cakewalk for the Raiders, who roared to a 42-7 lead in the final two minutes of the third quarter.

Davie refused to wave a white flag, scoring three touchdowns in the final 12:22 to close the gap. The War Eagles, though, were underwhelming when it counted, falling to 3-4 overall and 1-1 in the Central Piedmont Conference on a night of misty rain and wind. Reagan, which halted Davie’s three-game winning streak, put up 35-plus points for the seventh time while running its records to 5-2, 2-0.

“They are very explosive,” Davie coach Devore Holman said. “When you don’t execute defensively, they take advantage of it. Kudos to their staff for having them prepared.”

Reagan receiver/defensive back Isaiah Anthony put on a show. He had three receptions for 142 yards, including TDs of 80 and 48 yards. He intercepted a pass on defense. He converted six point-after kicks. As if all that weren’t enough, he nailed a 47-yard field goal.

But Anthony was not nearly the lone star for the Raiders, who soared to a 28-7 halftime lead after Davie had tied it at 7.  Quarterback Ben Skradski went 12 of 18 for 277 yards and five TDs, averaging 23 yards per completion. Jayni Glenn ripped off a 93-yard run on the way to 157 rushing yards. Rathel Carter had five catches for 82 yards as Reagan posted 394 of its 532 yards during the first half.

The halftime deficit was enough to give Davie a headache. Matters were compounded by the Raiders opening the third quarter with a short and high pooch kick that they recovered at the Davie 46. They didn’t cash it in, but it was still deflating for Davie to watch Reagan steal a possession. After the Raiders pushed the margin to 35-7 with 4:30 left in the third, they tried the pooch kick again – and it worked again as they recovered the ball at the Davie 35. That set up the scoring drive that made it 42-7.

“The two pooch kicks were killers,” Holman said. “They were pretty much identical. On the first one, I felt like our guy had to have the opportunity to catch the ball, but the call didn’t go our way. I’m not going to argue with that. It’s our job to come up with the ball in that situation. Therefore, our defense is back on the field,  and they take advantage of it.”

Although the damage had been done when Davie’s offense kicked into gear, the War Eagles put up some impressive stats. Chris Reynolds went 21 of 30 for 305 yards, offsetting two interceptions with four TD passes to match the school’s single-game record. It’s the second time this year the junior has achieved that. 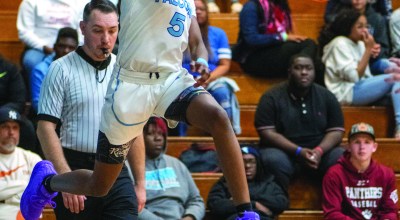