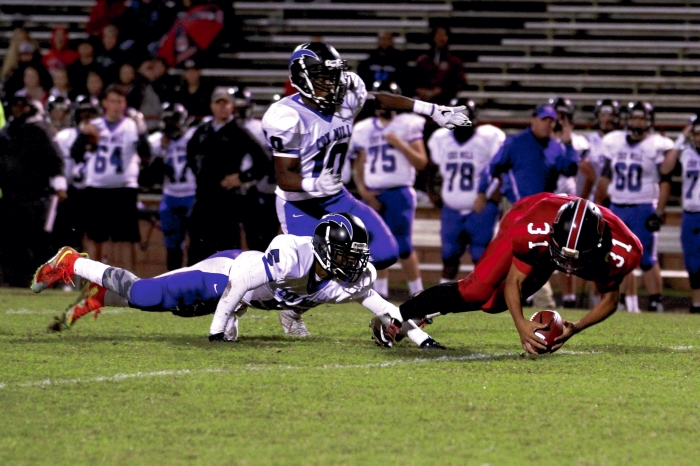 LANDIS — It is six games into the season and South Rowan is still kicking the tires.

Playing without starting quarterback Heath Barringer, the winless Raiders never got untracked against visiting Cox Mill on Thursday and dropped a 27-10 SPC decision.

“Our quarterback went down with a concussion last week and we put a new guy in who absolutely played his heart out,” coach Daniel Yow said after South (0-6, 0-4) descended into the league basement. “Tyler Rary filled in, but the problem with that is he’s our best receiver. When he took over at quarterback we lost a receiver.”

Rary looked like a wideout wearing quarterback’s clothes. A 5-foot-11 senior, he was sacked four times, threw a pair of fourth-quarter interceptions and spent much of the night running for his life.

“I thought I could get the job done,” he said after completing four of 19 passes for 60 yards. “The play-calls were right. I had faith in the offensive line. I thought we had a chance to win the game.”

South’s offense never reached the end zone but the Raiders did take a 3-0 lead on Brennan Lambert’s first-period field goal. Meanwhile, its defense allowed 421 total yards — including 399 on the ground. Cox Mill running back Tyler Arnold was most damaging, seemingly running downhill for 192 yards and a pair of touchdowns.

“He’s had a good season,” winning coach Craig Stewart said after Cox Mill (2-4, 2-2) evened its conference record. “He runs hard and he runs well. Most of our handoffs are reads at the line, and we’ve got a new quarterback (sophomore Matt Alderfor). This was his first start. It looked promising.”

Alderfor helped the Chargers take the lead for good on their second snap of the game. He handed off to slotback Devin Cobb, who broke several tackles and motored 75 yards down the right sideline for CM’s first TD. “We’ve got to make those plays,” said South linebacker Brian Cagler. “We’ve got to tackle better. They made some big plays but their offense wasn’t that good.”

It was on this night. Overshadowed was a shutdown performance by CM’s defense, which forced three turnovers and limited South to 90 total yards. A highlight came late in the opening quarter when defensive lineman Jameil Bailey scooped up a South fumble and rumbled 29 yards into the end zone, providing a 13-3 lead.

“We showed more consistency than we’ve showed all season,” Stewart said. “Offensively we didn’t commit some of our dumb penalties. And defensively we played with good awareness. They were all over the place.”

Cox Mill may have secured the victory on its first second-half possession. It was aided by an offsides penalty against South on a fourth-and-7 play from the Raiders’ 20-yard line. Given new life, the visitors picked up a first down and went up 20-3 when Arnold scored on an 8-yard burst off left tackle.

Arnold scored again early in the fourth quarter and this time he looked like he had a police escort on a 53-yard sprint up the middle. South closed the scoring with 1:50 to play when junior linebacker Jacob Gulley recovered a Cox Mill fumble in the end zone — but it was far too little and far too late.

“Everybody likes to look at us as next-year’s-team,” Yow said afterward. “Everybody understands that we’re going to be ok in the future, but we’ve got to win ballgames now.”

NOTES: Barringer is cleared to practice on Monday and will be ready for next week’s game against Carson. … Junior Austin Chrismon caught three passes for 31 yards and emerged as a reliable receiver.