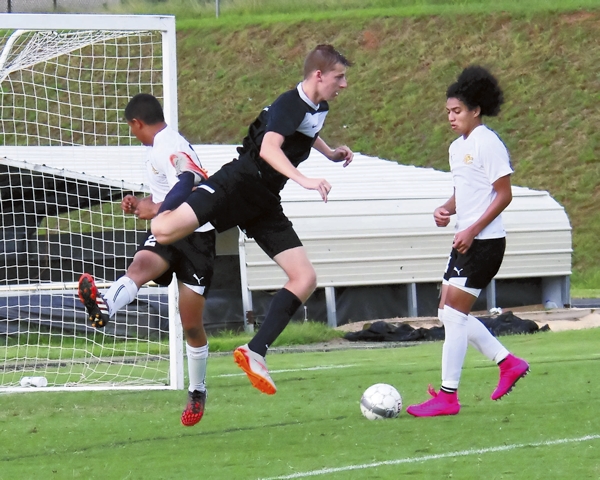 Jeff Linville/Mt. Airy News ... Salisbury Landon Goodman, center, touches the ball in front of the net just before it goes off a Surry Central defender for a goal on Thursday. The Hornets won the game, 5-1.

DOBSON — Landon Goodman scored two goals and a strong defense led Salisbury to a 5-1 victory over Surry Central here on Thursday. Surry Central had been undefeated through eight matches, but couldn’t keep it going against the Hornets.

Salisbury coach Matt Parrish was pleased with the win, saying, “it was a very stiff challenge against a very good team.”

“This is exactly what I wanted,” said coach Blake Roth. He thought that his team (6-1-2) was feeling pretty good about themselves, and they needed a wakeup call that there are teams in the 2A that are further along than they are.

There are three S’s in soccer, said Roth. Skills, speed and size. The Golden Eagles never have much size, but they often have an advantage in speed in skills, he noted. In this game, not only was Salisbury bigger, but a couple of players had speed to go with that size.

Landon Goodman was one of those players for the Hornets. He had two goals and an assist.

Goalkeeper Arturo Ramirez also had a strong game for Salisbury.

“They’re offensive-minded, they came at us hard at the outset, and they had the upper hand the first 20 minutes,” said Parrish. “Ramirez made two fingertip saves early, pushing one off the post and one over the bar.”

The Hornets stunned Central with a first goal that was a frozen-rope throw in by Joshua Lynch and Cristian Uribe headed it in.
Ramirez made several good stops, including three balls that likely would have beaten every other keeper the Eagles have seen so far this season, he said.

Brayan Gomez hit a low screamer toward one of the posts, and Ramirez still made the play, he pointed out.

“Before the game I told my team that from this point on, we are going to treat every team like they are the best in the state — and in this case it’s probably true,” he said. Roth said Salisbury likely will make the Elite Eight in the 2A playoffs, if not further.

“It was fun to watch as we moved from counter-punching to attacking with numbers, Parrish said. “The end of the first half and start of the second half were the best we’ve played this season. We were  battle-tested. It’s like I told our team, games like this are why we play the 4As like Mooresville and A.L. Brown.”

A few minutes after Salisbury’s first goal, the Hornets had a throw-in from the left, and Central only had a couple of defenders near the top of the 6-yard box.

The throw-in deflected off Goodman’s ankle, then ricocheted off Moises Pineda’s shin guard into the net.

It remained 2-0 for the remainder of the half.

A couple of minutes into the second period, the Eagles were on attack. Ramirez caught a shot and passed out to the right. The Hornets streaked up the right line and scored quickly to make it 3-0, with Goodman in space, he crossed it diagonally and back to Melvin Bonilla, who scored.

Goodman scored the fourth goal on a penalty kick and also scored to make it 5-0 on an assist from Bryan Garcia.
At that point, Roth moved Justo Cristobal to defense and inserted freshman Andres Flores, who scored Central’s only goal.
Jeff Linville of the Mt. Airy News contributed to this article.