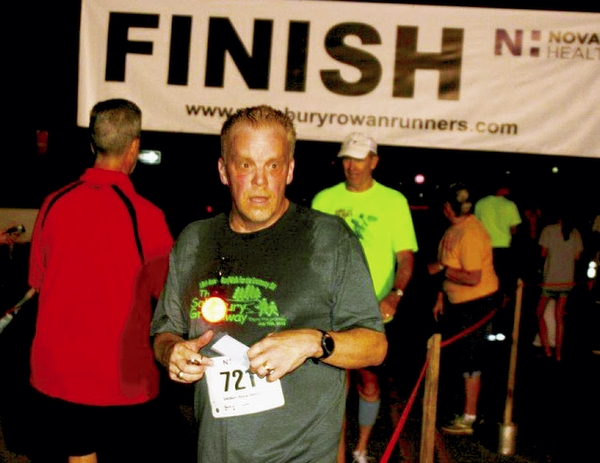 Stu Stepp and Susan Muth were the big winners on Friday night in downtown Salisbury as they took the top spots in the Innospec Sunset Run 5K. Storms were in the area, but only a few drops of rain fell on Fisher Street just before the 8 p.m. start.

Stepp led for the first time ever in taking the overall win with a time of 19 minutes and 35 seconds. He said, “I had never been in front or won a 5K before. It was a lot different feeling being up there, worried more about the guys behind me than the pace on watch. I love running Friday night races. It was a little humid but the storms stayed away. The Sunset 5K was one that I will never forget.”

Muth paced the women in another tight finish. Noelle Redding was second in 22:23, and Emma Calvert was a close third in 22:36.

Top masters runners, those over 40 years of age, were Bobby Aswell and Dr. Acquawon Stallworth. Leading the grandmasters, runners over 50, were Rob Holmes and Angie Ramos. The fastest senior grandmasters runners, all over 60, were Steve Austin and Savina Daniel.

A tight finish also topped the fun run for kids, 10 and under. Braxton Long won with a time of 4 minutes and 6 seconds. Lenny Medina was second in 4:23 with Grant Cameron taking a close third in 4:27.

All proceeds for the Sunset Run go the Rowan County United Way. Innospec was also the first-time title sponsor for the Sunset Run. John Struzick of Innospec said, “We were fortunate to have the opportunity to help out. Our company always supports the United Way. Being involved with this event also matches well with Innospec’s health initiative. We had 20 employees participate in the event tonight and 72 will get specially made Sunset Run sponsorship shirts as a part of the company’s United Way campaign.”

Other sponsors were Novant Health, the City of Salisbury, Downtown Salisbury, Cheerwine, Kluttz Reamer, and Chick-fil-A.

It was also a night of special stories for runners from both near and far. Bill Kimmons of Tallahassee, Fla., took the senior grandmasters runner-up slot with a time of 26 minutes and 58 seconds. While his place or time in itself might not seem remarkable, how he came to run the race is. Kimmons was diagnosed with a form of melanoma and had immediate surgery on his back on Aug. 28. His doctor told him not to run. Just seven days— and 75 stitches — later, Kimmons did run on Friday night.  “Maybe we better not tell the doctor,” he said.

Daniel took the women’s senior grandmasters title, her first ever, less than a year into running. She said, “I am so happy to get this. I can’t believe it!”

Salisbury City Manager Lane Bailey ran his first local 5K and said, “It was a great night to run through a beautiful community. More importantly, we ran for a great cause, the Rowan County United Way.” Bailey will soon begin training for a half marathon, although he has not decided which one. “I want to be ready by December and just stay in shape, eventually finding the best one to do,” he said.

Jackie Harris, Resource Development and Marketing Director for the United Way, said, “Thanks to everyone who participated. We are grateful to Innospec, our lead sponsor, the Rowan Public Library, the City of Salisbury and all the other sponsors and volunteers. United Way supports 16 agencies that provide much-needed health and human services in our community.”

Timing and results were provided by the Salisbury Rowan Runners. Complete results are available at www.salisburyrowanrunners.org

By Dennis Davidson dennis.davidson@salisburypost.com As is usually the case at the Crowder/Dorsett Labor Day 4-Ball golf tournament, there was plenty... read more