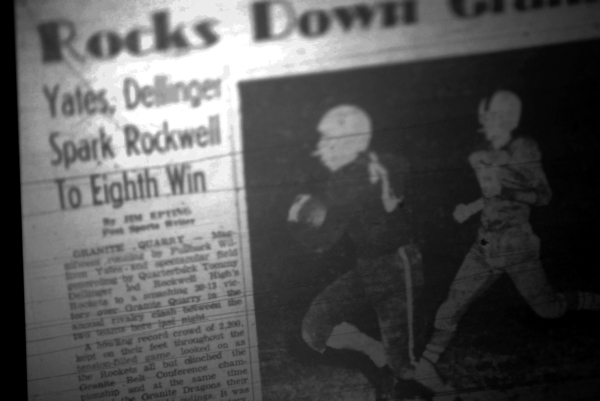 Salisbury Post file image ... Yates was one of the stars of the Rockwell High School team that had an undefeated regular season in 1957.

ROCKWELL — William Yates is 76 years old, but the man who once scored five touchdowns in a single night for the 1957 Rockwell High Rockets, the greatest team in school history, remains feisty.
“Oh, I’m still here,” Yates said. “Unfortunately, a lot of my teammates are no longer with us.”
Yates, a fullback for a team coached by Carl Rudisill and Jerry Pless, led Rowan County in scoring in 1957 with 109 points — 17 TDs and seven PATs.
He still has the Salisbury Post clipping detailing the county scoring race in a battered scrapbook. He’s proud of his scoring title because 1957 was the season when the “Touchdown Twins,” George Knox and Bobby Crouch, were piling up points for Boyden’s 3A state champions.
Rockwell had an undefeated regular season and made a run at a Class A championship in 1957, with Yates and quarterback Tommy Dellinger at the forefront.
Dellinger, who died in 2010, was a brilliant guy who played safety at N.C. State and went to work for General Electric as an aerospace engineer. Dellinger played in three college all-star games, including the big one when the collegians took on the NFL champion Green Bay Packers at Chicago’s Soldier Field.
“Tommy was so smart and he knew what he wanted to do with his life,” Yates said. “While most of us were out doing whatever, Tommy was in his room studying. We could see the light on in his bedroom.”
Lenoir-Rhyne and Appalachian recruited Yates and Clemson called him, but he never felt like he was college material in the classroom. On the football field, however, Yates was tough to handle.
“He was mean,” his wife and former Rockwell majorette Joan Heilig Yates, said with a laugh.
The Post never could decide exactly how big Yates was, fluctuating between 160 and 175. He says he was 180, a sizable back for his era.
“Not that we could compete with the kids that play now,” Yates said. “They’re bigger, they’re faster, they’re in better shape. They would kick the crap out of us.”
Still that 1957 season was filled with joy and magic. Rockwell had never made the playoffs before, and Yates recalls that he and his classmates didn’t win a single game when they were freshmen.
“That first practice in ’57, there were 15 of us,” Yates said. “But we were all seniors and we’d played together a while. We had good coaches. We knew we’d have a good team.”
They were hard-nosed kids, farm and mill kids. Yates’ family had moved up from South Carolina to Rockwell in 1953 because his uncle owned a good-sized farm.
“When I saw Rockwell for the first time, I knew I wasn’t going anywhere else,” Yates said.
Rockwell opened the 1957 season with a mixture of buzz-cuts and shaved heads to express team unity and beat Mount Pleasant. Yates, who played linebacker on defense, scored two TDs.
Rockwell’s second outing was a strange one. The lights went out at Bandys with Rockwell leading 13-0.
When Rockwell smashed Troy 39-6, Yates scored five touchdowns. He broke scoring runs of 88, 24, 22, 15 and 13 yards.
“I had four touchdowns by halftime and I don’t think I played at all in the third quarter,” Yates said.
Romps against Norwood, Hartsell and Cleveland followed, and Rockwell was 7-0 heading into a showdown with arch-rival Granite Quarry. Coach Hal Quinn’s Granite Dragons also were 7-0 and they had players such as Nelson Durham, W.A. Cline and Richard Sellars.
“Oh, we didn’t like Granite Quarry at all,” Joan Yates said.
It was a major matchup. The Post reported 2,200 people witnessed the clash of unbeatens in Granite Quarry.
“All I remember is Nelson Durham running back the opening kickoff for a touchdown for them,” Yates said.
Yates, Dellinger and halfback Wayne Smith scored TDs, as Rockwell pulled out a 20-13 victory. Yates had 146 rushing yards.
“Granite Quarry had a good team,” Yates said. “I’ve always wondered what would’ve happened if Granite and Rockwell had been consolidated that year.”
The consolidation of the rivals into East Rowan High wouldn’t come until 1959. With Quinn coaching, East went 9-1 in it first year of competition.
The win against Granite Quarry made Rockwell the Granite Belt Conference champions, and the Rockets overcame a flu bug that weakened Yates and several others to beat Stanley High 14-7 in their first playoff game. That game was played in China Grove.
Next for sixth-ranked Rockwell was a game in Morganton against undefeated and second-ranked Marshall High. That state quarterfinal was played in heavy fog, and Marshall’s Red Tornadoes ended Rockwell’s season with a 13-7 victory. Marshall converted a fourth-and-1 at the Rockwell 2-yard line on the game’s decisive play. The Tornadoes got that first down by an inch.
“Stuff happened,” Yates said. “You never want to blame refs, but we had several big plays called back.”
Yates remembers Albemarle won the Western North Carolina High School Activities Association championship that season, in addition to Boyden’s state title.
“We really wanted to be part of a line of championship teams coming down Highway 52,” Yates said. “That was the plan.”
The loss in the fog was Yates’ last official football game, but he has no regrets about getting married and going to work at Rowan Printing shortly after his high school glory days.
He’ll always have memories of 1957, when he rolled for 17 touchdowns in a black and white uniform for a school with fewer than 60 students in the senior class.
“He was something, and everyone in Rockwell just called him Yates,” his wife said. “We dated for a year before I found out he had a first name.”