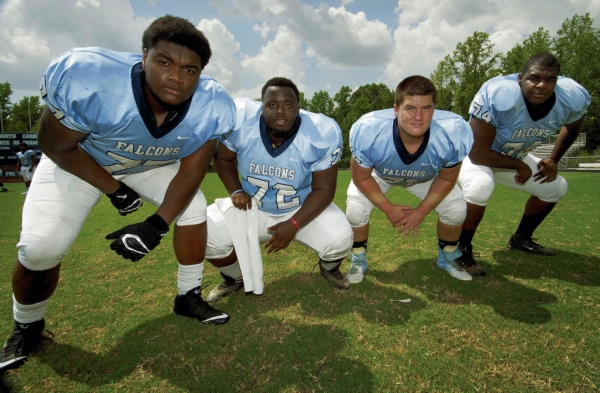 MOUNT ULLA — If you liked what you saw from Hezikiah Banks last season, you’re going to love him this year.

The West Rowan offensive lineman has added 40 pounds of beef to a frame that was already formidable — and he’s ready to throw his weight around.

“Mama’s home cooking,” the 6-foot-4, 335-pound senior said with a broad grin following a recent practice. “And training. Actually I didn’t play the whole basketball season this past year, so I picked up and lost some weight. I was 350 in May, but I’ve lost a few pounds.”

Banks is expected to anchor a seasoned offensive line that includes four seniors and junior Javon Lofton. He’s trying to make a seamless transition from right tackle to left tackle — as Jacob Radke’s heir apparent — and will be entrusted to protect quarterback Kacey Otto’s blind side.

“This is almost the same line we had in our eighth-grade year,” Banks said. “That team went undefeated. This line is good at everything and we go all-out.”

Banks, a third-year starter, was an all-county pick in 2014 despite being plagued by a recurring toe injury. West still went 8-5 overall, cracked the 40-point barrier five times and reached the second round of the state playoffs. “He’s always been a big key to our team,” said teammate K.J. Wilson, West’s new right tackle. “When he blocks, we win. He’s best at blocking, blocking down and making the play.”

That’s never been a problem for Banks, a mauler who clears holes wide enough to drive the team bus through. And while it isn’t easy to get new coach Joe Nixon’s undivided attention, Banks has already earned a seal of approval.

“He’s a big, athletic kid,” Nixon said. “He’s done a good job in the weight room and he carries the weight well. It’s a good-looking 330 pounds.”

It appears Banks and his line mates — Lofton, Wilson, guard Jeremy Fortson and center Shane Barber — have bought into Nixon’s sagacious, team-first philosophy. “The offensive line doesn’t work like that. To be a great line, all five of them have to be able to work together,” said Nixon, a former standout on Catawba’s offensive line. “That’s what we’ve been preaching. If these five guys play together, we’ve got a chance to be pretty good.”

Banks understands. A New York native who relocated with his family seven years ago, he’s the unofficial leader of West’s man-sized line. He’s already installed a doctrine that should lead the Falcons back into the postseason. “It’s all about going hard on every play,” he said. “Everybody’s got to do their job — and their job is to give everything they’ve got. If we all do that, we’ll be all right.”

Some prominent college programs have taken notice. Banks has been offered a scholarship to join East Carolina’s program, while UNC, Wake Forest, N.C. State and Georgia Southern have shown luke-warm interest. “It’s exciting,” he said. “But honestly, I’ll play anywhere they offer me a chance to play and get an education.”

In the meantime Banks will focus on playing above-and-beyond his potential beginning Friday night.

“In our offense, we’ve got to establish a running game,” Nixon said. “We’ve got great offensive skill. If we can get that offensive line to mesh, we’re going to be pretty good.”

Count on Banks to do his part.