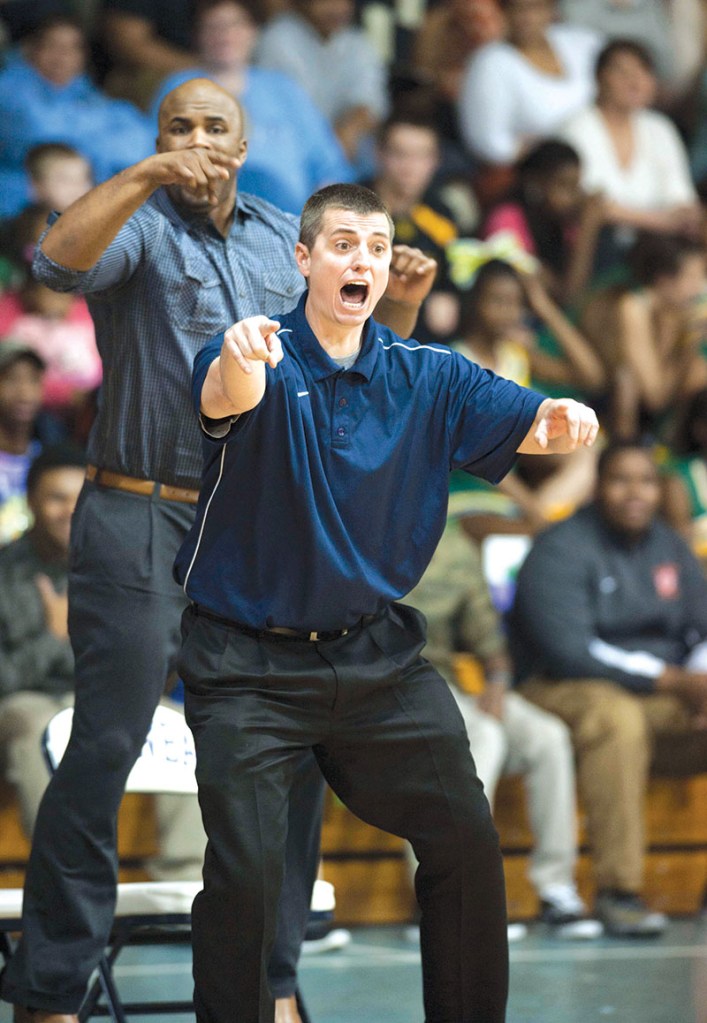 FILE PHOTO BY JON C. LAKEY / SALISBURY POST Carson coach Brian Perry and assistant coach Andre McCain (back) react to a missed call by the referee against North Rowan in the championship game of the 2013 Sam Moir Christmas Classic. McCain was named the head coach of the South Rowan boys basketball team.

LANDIS — It’s a short trip from Carson to South Rowan.
It’s a longer journey from assistant coach to head coach, but Andre McCain is confident that transition will go smoothly. A Carson assistant since 2011, McCain has been hired as South Rowan’s new boys basketball coach and ISS teacher.
“I hate to lose Andre because he’s one of the most loyal guys I’ve ever been around,” Carson head coach Brian Perry said. “At the same time, I’m very happy for him. He’s not only getting a well-deserved chance to be a head coach, he’s getting that chance in Rowan County.”
McCain will be the ninth head coach in the history of a South Rowan program that began with the 1961-62 season.
Bryan Withers, who coached South Rowan the past three seasons, was hired at Salisbury in May. McCain was one of many applicants for the Salisbury opening. When Withers landed that job, McCain adjusted his focus to pursuing the new vacancy at South Rowan.
“I went through the interview process at South and then was called back for a second interview,” McCain said. “Everything went well in both interviews. I appreciate this opportunity, and I’m ecstatic about this opportunity. I’ve enjoyed being an assistant, but when I got into coaching, the goal was to become a head coach.”
McCain’s roots are firmly planted in Rowan County. He first appeared in the Salisbury Post’s sports pages as a part of a national champion AAU basketball team in the 1990s, and he went on to a fine athletic career at West Rowan. McCain was a four-year varsity basketball player for the Falcons.
In his sophomore season (1996-97), the Falcons, coached by Bob Shipwash, won the 2A state championship. West Rowan moved up to 3A for McCain’s junior and senior seasons. He was a solid starter on conference-championship teams coached by Mike Gurley. Both of those teams included Scooter Sherrill and Antwan House. In McCain’s senior year, the Falcons added Donte Minter to the mix.
The high school teams McCain played on were 96-23.
“I had the experience of playing on a lot of winning teams,” McCain said. “The plan is to bring that winning mentality to South Rowan, but winning isn’t going to fall into anyone’s lap. Winning takes hard work and dedication.”
McCain’s prep days also included a senior year in which he was West Rowan’s top rusher in football. That was the 1998 season, Scott Young’s first in Mount Ulla. The Falcons won only three games, but McCain’s 567 rushing yards helped them be respectable. McCain produced 100-yard rushing games against Piedmont and Sun Valley late in the season and got a chance to play college football at Elizabeth City State.
“They moved me to tight end at Elizabeth City State, and I had great experiences in college football, like coming home to play against Livingstone,” McCain said. “I’ll always love football, but basketball is still my passion.”
McCain transferred to East Carolina after three years. Although he didn’t compete in football for the Pirates, he did graduate in 2004 with a degree in Exercise Sports Science.
After graduation, he was employed by N.C. State as an assistant strength and conditioning coach. He worked with the Wolfpack’s wrestlers, swimmers and the women’s basketball team.
McCain returned to Rowan County in 2010 and made a move from personal training to coaching. He coached football and basketball (jayvee boys) at East Rowan before moving over to Carson.
In 2010, McCain and high school teammate Tremayne Diggs coached the local Carolina Phenoms to a 13-under national championship in the USBA tournament held in Myrtle Beach, S.C. That team included future standouts such as Carson’s Jacob Raper and Marquez McCain (Andre’s nephew), West Rowan’s Celexus Long, North Rowan’s Alexis Archie and A.L. Brown’s Joekeem Neal.
In recent years, McCain has been a calming presence on the Carson bench next to Perry.
Now he’ll be building a program at a school that hasn’t had a winning boys basketball season since a 14-13 mark in 2009. South Rowan’s last conference championship was in 1989.
“The South Piedmont Conference is a tough league,” McCain said. “It will take time to get to where we want to be, but we’re going to work as hard as we can.”
Perry knows McCain is ready for the challenge.
“Andre will do a great job for South,” Perry said. “He’ll push their kids.”