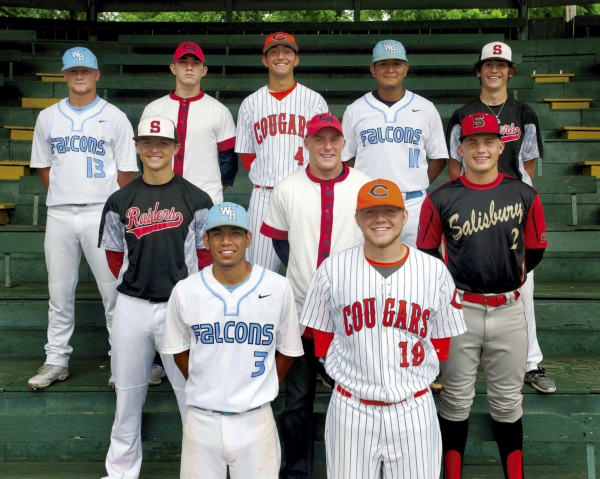 Mitchem’s mother, Sandra, still has the photos from their first Halloween celebration. Mitchem disguised himself as a pumpkin — perhaps realizing his future would be in orange — while Myers opted for a cow costume.
Neither youngster dressed as a ballplayer, although they became good ones. They were travel ball teammates, and they’ll bring their friendly rivalry full circle this fall as college roommates and members of Catawba’s baseball team.
As far as their senior high school seasons, Mitchem and Myers were leading contenders for the Mark Norris Memorial Award. Their unofficial tussle lasted all spring.
•
Mark Norris served as Salisbury High’s catcher and captain in 1975 and 1976. He was killed in an auto accident in 1977 and the Norris family established an award to honor his memory. For five years, that award went to Salisbury’s MVP, but in 1983, the award got even bigger when it evolved into the Rowan County Player of the Year Award.
•
A pitcher-shortstop for the Hornets, Myers batted .452 with 22 RBIs and 11 doubles and scored 33 runs. His 5-3 mound record included a no-hitter and a pair of outstanding efforts against Central Carolina Conference champion West Davidson — a 2-1 win and a 2-1 loss. Myers was the CCC Pitcher of the Year.
Yet, Myers is the runner-up for the Mark Norris Memorial Award because of the historic season Mitchem produced for Carson.
Mitchem had 43 hits and batted .524, both school records. He finished his four-year varsity career with school records for career batting average (.403) and hits (116).
“He doesn’t strike out, he puts the ball in play, and he uses the whole field,” Carson coach Chris Cauble said when Mitchem signed with Catawba. “Every year, he’s been one of our leading hitters.”
Mitchem had six three-hit games as a senior and finished his prep career with a 13-game hitting streak. He drove in a team-leading 23 runs and whacked 10 doubles.
Walking 16 times — and striking out just seven times — he posted an astounding on-base percentage of .646.
“After the year I had as a junior (.366, 37 hits), I was just hoping I could do close to that well again,” Mitchem said. “But it turned out to be a great season. As a senior, you’ve got more experience and you’re less nervous. I just kept hitting backside and balls kept falling in.”
While he was mostly a first baseman, Mitchem excelled on the mound when called on. He had two wins and three saves with a 2.01 ERA. He was the winner with an extra-long relief outing in Carson’s epic 13-inning victory against Concord and he pitched five scoreless innings in the 3A state playoffs.
“We had great pitchers at Carson, so I’ve always done more pitching in Legion than high school,” Mitchem said. “The most memorable pitching outings were that marathon Concord game and getting the save against East Rowan. Living near Faith, I always thought I’d be playing for East Rowan when I grew up, so that was one of those games you dream about.”
Being left-handed helps in baseball, and Mitchem, who bats and throws lefty, is grateful for that natural gift.
“No one else in the family is a lefty,” he said. “That’s something that just happened.”
Mitchem’s athletic ability didn’t just happen. His father, Barry, was an all-county football lineman at South Rowan. He played at Catawba and was head coach at West Davidson for many years. Now he’s an assistant coach at Carson.
“It’s helped that I was around sports since I was little, but my dad didn’t push me into playing,” Mitchem said. “He’s about the most laid-back father/coach in the world. He’s just let me do my thing, whether it was baseball, swimming or punting for the football team.”
As a senior, Mitchell couldn’t have done his thing any better. He adds the 38th annual Mark Norris Memorial Award to his South Piedmont Conference Player of the Year award.
•••
The 12-man all-county team has a player at each position, with two pitchers and two utility players.
Pitcher — Omar Bautista, West, Sr. — Headed to Catawba Valley Community College, Bautista was 9-1. He is the South Piedmont Conference Pitcher of the year and the Patrick Snider Memorial Award winner as Rowan County Pitcher of the Year.
Pitcher — Riley Myers, Salisbury, Sr. Catawba signee is the Central Carolina Conference Pitcher of the Year.
Catcher — Will Steinman, Salisbury, Jr. — A special athlete and a very swift catcher, Steinman threw out runners, stole a county-leading 26 bases and batted .400.
First base — Heath Mitchem, Carson, Sr. Catawba signee is the South Piedmont Conference Player of the Year.
Second base — Chandler Corriher, South, Sr. Corriher batted .304. He was second on the team in runs (17) and tied for second in RBIs (14). He had added exceptional defense (12 double plays) and aggressive baserunning.
Third base — Juan Garcia, West, Sr. — Headed to Catawba Valley Community College, Garcia’s four homers led the county. He overcame a shoulder injury to bat .324 with 17 RBIs.
Shortstop — Ike Freeman, East, Jr. — The UNC commit was East’s best offensive player with team highs in batting average (.372), hits (32), RBIs (21) and doubles (10).
Outfield — Michael Morrison, Carson, Jr. — Carson’s offense almost always started with Morrison, who batted .348 with team highs of 29 runs and 16 steals. Outstanding center fielder as well.
Outfield — Eric Stowe, South, Sr. — Stowe batted .453 and was South Rowan’s strongest offensive player with team highs of 19 runs, 19 RBIs and 34 hits.
Outfield — Harrison Baucom, West, Sr. — Baucom was the catalyst for West Rowan’s offense. Headed to Catawba, he batted .343 with 22 runs and 14 steals.
Utility — Owen White, Carson, Fr. — White was an amazing 15-year-old as a pitcher and shortstop. He was 8-2 on the mound and batted .374 with 20 runs scored.
Utility — Samuel Wyrick, East, Sr. — Wyrick is headed to Tusculum to play quarterback, but his baseball farewell was strong. He batted .365 with nine doubles and led the Mustangs with 24 runs scored.
•••
Honorable Mention
Carson: Matt Saul. South: Hunter Travis, Bo Corriher. East: Joseph Peeler. West: Jeremy Simpson, Kacey Otto, Bryan Ketchie, Austin Love. Salisbury: Ryan Jones, Harrison Smith, J.T. Austin, Alex Yang. North: Noah Gonzalez, Jake Pritchard, Rob Monroe.