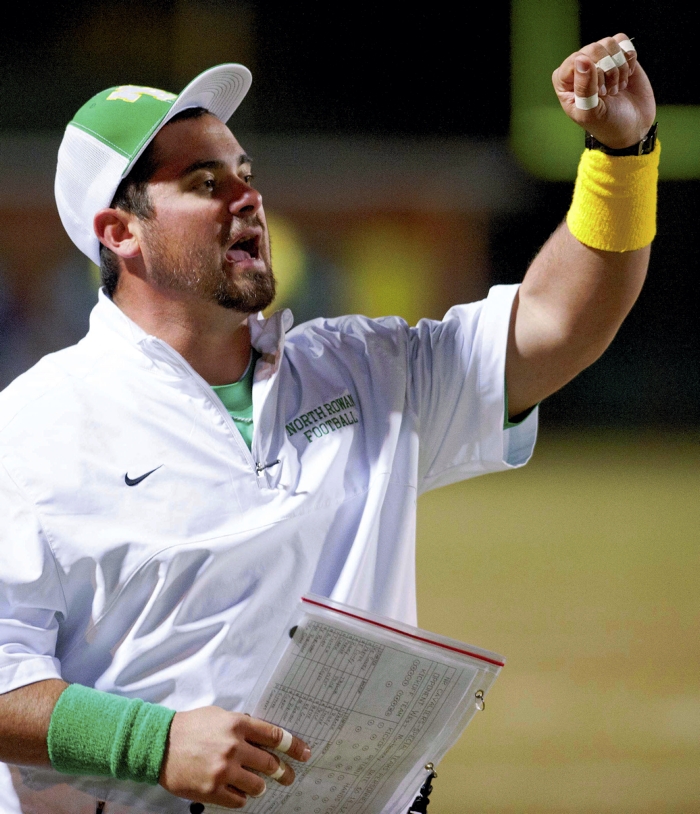 The coaching carousel for Rowan County high school football has finally stop turning. North Rowan was the last to fill its open position for the upcoming football season Wednesday when principal Fateama Fulmore told athletic director Ben Hampton the program was his to run.

He learned of his new job title after a luncheon honoring Demeria Robinson as the Central Carolina Conference Female Athlete of the Year. He said he told players when he got back to school. The group then went out for its sixth day of spring practice.

The announcement was essentially the removal of an interim tag on the head coach title. Hampton has been organizing the Cavaliers’ spring workouts as the school spent the past four weeks searching for Joe Nixon’s replacement.

It was just one example of how things in Spencer have been business as usual.

“The kids have done an unbelievable job,” Hampton said. “They stayed on it without a head coach, and they had great numbers at conditioning.

“So, my hat’s off to the kids. They didn’t hang their heads. They said, ‘Let’s get our nose to the grindstone.'”

The school kept Hampton out of the hiring process to avoid any conflict of interest. He said he was not aware of how many applicants there were for the job.

Hampton will retain his duties as athletic director. It’s something he says he can balance because of those around him.

“The time requirements of an athletic director, they can go overlooked,” Hampton said. “It is a huge time commitment. But one thing about North Rowan, it’s a great community. So, I’ve got good, quality people to lend a helping hand as needed.”

He’ll enhance those time management skills this summer while balancing a 7-on-7 football schedule and summer workouts while working as Southern Rowan’s head coach in American Legion baseball.

In keeping with the theme of continuity, there won’t be a lot of changes from Nixon’s system to Hampton’s. He said the Cavaliers will still operate out of the spread. Although there could be a few small tweaks here and there. Assistant coach Steve Williams will still be relied upon to lead the defense.

“Teenagers. They (thrive) off consistency,” Hampton said. “If we stay consistent, that will give them a better opportunity for success than scrapping everything. We’ve got a good base, and now we have to add to it.”

Hampton, a West Rowan graduate who attended Coastal Carolina on a football scholarship, has been an assistant coach in Rowan County for the past eight years. He spent five years at Carson as the high school built its program from the ground up.

Hampton transitioned to North Rowan when Nixon, Hampton’s brother-in-law, took over in 2012. The Cavaliers went from a 4-8 team in 2011 to an 8-4 team in the new staff’s first season. The Cavaliers had a one-loss campaign in 2013 that ended in the third round of the 2A state playoffs, and they advanced to the second round of the 2014 2A state playoffs.

At North Rowan, Hampton said the coaching philosophy was one of collaboration and wearing multiple hats. Hampton served as an offensive coordinator while also working with quarterbacks and running backs.