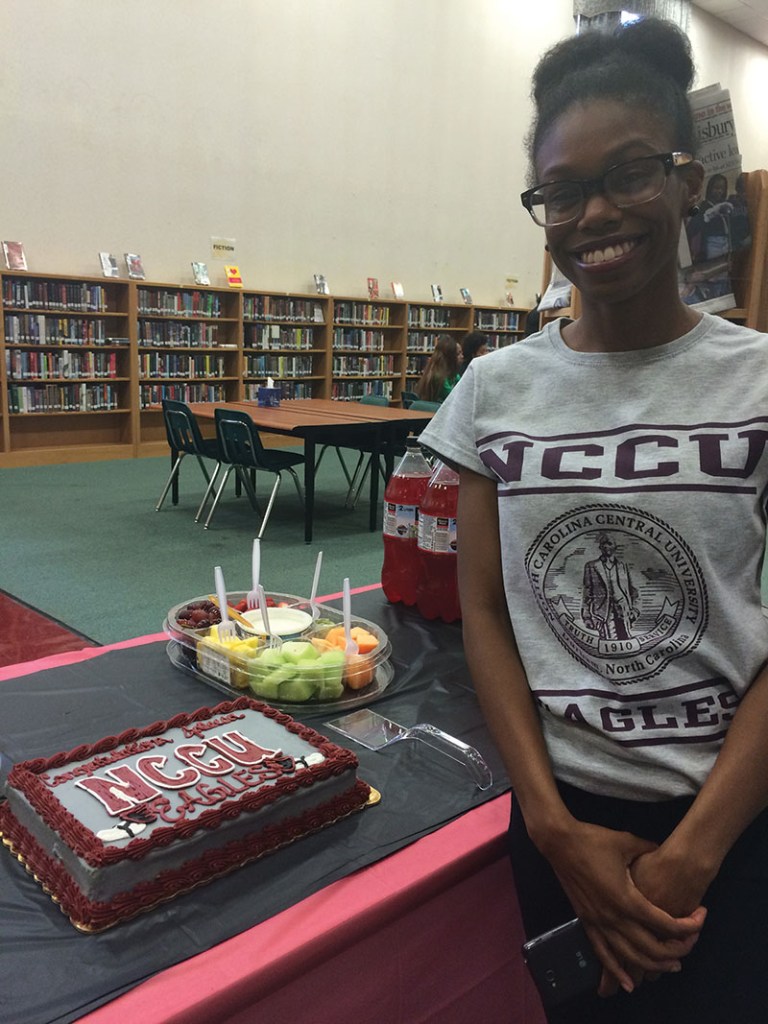 SALISBURY — Salisbury High track standout Jaleesa Smoot signed recently with North Carolina Central, but the first step toward signing day for the sprinter started when she was in elementary school.

P.E. teacher Marvin Moore was the first to notice her. Moore put in a call to Jan Smoot, Jaleesa’s mother, and requested a conference.

In the late 1990s, Moore was a tremendous basketball player at Catawba — South Atlantic Conference Basketball Player of the Year, SAC Athlete of the Year, All-American. Moore knew an athlete when he saw one. He realized Jaleesa had something extra.

Jan was surprised to receive a call from school. Her daughter had never been a discipline problem. What in the world had Jaleesa gotten into? The face-to-face meeting was arranged.

“I’m not sure you understand,” Moore said. “Jaleesa can outrun the boys.”

Since then, Smoot has trained with sprints coach Tim Dunlap, and she competed with the Salisbury Speedsters AAU team in national events. When Smoot was at Erwin Middle School, she had more success. She still holds the Erwin school records for the 100-, 200- and 400-meter dashes.

Erwin students normally move on to East Rowan, but Smoot transferred to Salisbury High to enroll in the Science, Technology, Engineering and Math Academy.

Her arrival provided a significant boost for the girls track program. In the last decade, no Hornet has run faster than Smoot in the 100, 200 and 400 for the outdoor races as well as the 55-, 300- and 500-meter dashes in indoor track.

In other words, Smoot still outruns most of the boys.

Smoot is tiny but tough. The 400, an all-out sprint for a full lap, is the most draining dash, but it’s her favorite.

Smoot has won many events, including nine Central Carolina Conference individual titles, five Rowan County titles, two regional titles and one state title. Her favorite race of all-time was one she didn’t win in Greensboro.

That race was in summer 2013. Smoot placed second in the 400 in an elite national field.

That same summer Smoot won the 400 in the Powerade State Games, and she ran a 55.75 400 meters to win the USA Track & Field’s Junior Olympics in Greensboro.

After a long period of sunshine, Smoot’s junior year brought rain — her first serious injury and first encounter with adversity. She injured a hamstring during the indoor track season. Probably she suffered the injury because she had to run a 300 and a 500 with limited recovery time in between.

That injury created gaps in her string of titles. While she dominated CCC sprints for four seasons, she only won the 100 in 2014. Remarkably, she also won the 800 — a race she doesn’t compete in often — in the 2014 Rowan County Championships.

Smoot is healthy as a senior. She won the 100 and 200 in the recent CCC Championships and was second to North Rowan’s sophomore phenom Payton Russell in the 400. Russell once was a teammate of Smoot’s on the Salisbury Speedsters.

Next for Smoot is Saturday’s 2A Midwest Regional in Monroe, where she’ll look to qualify for the state championships in all three dashes.

Smoot had college options. Her speed combined with a strong academic record — she’s in the National Honor Society — made her a target for Ivy League schools.

“A long time ago when she was getting started, she was thinking about far-off places like LSU and UCLA, but when the time got closer to making a decision, she wanted to stay closer,” Jan Smoot said. “It looked like it would be Hampton for a while, but then she really liked North Carolina Central. That’s where she really felt the most wanted. They have a great track program and they can help her reach another level.”

Smoot already knows someone on the Eagles’ track team. Christa Landy from West Rowan is a sprinter at the MEAC school.

Jan Smoot graduated from N.C. Central with a B.S. in economics. While Jaleesa will attend the same school, she plans to travel a different academic path. Her goal is to become a neonatal nurse practitioner.

Almost as much as she loves running the curves.