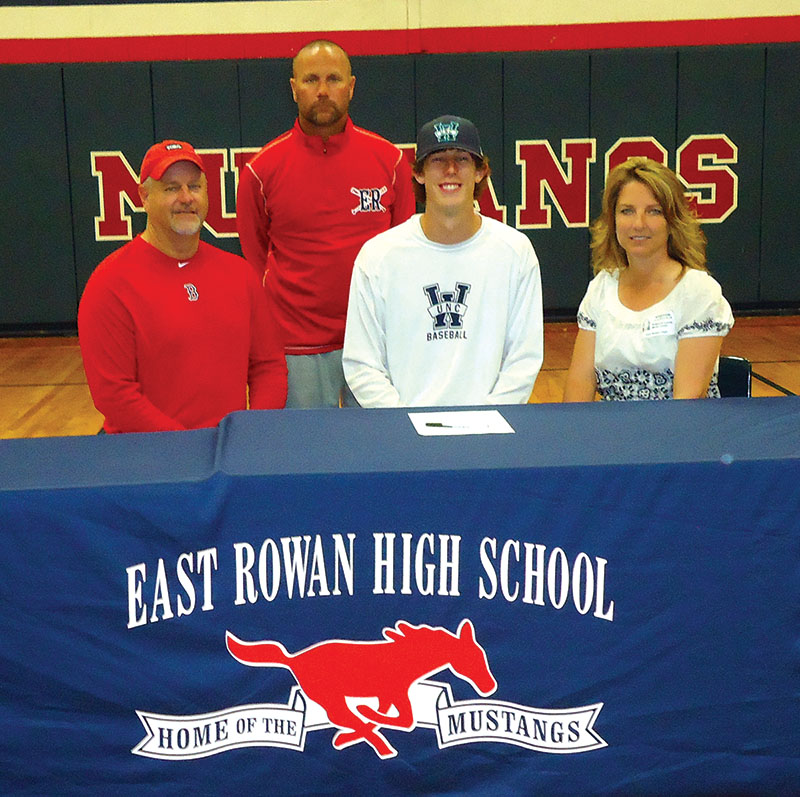 A ceiling in athletic terms refers to how high a player can go if everything works out. If a player has a “high ceiling” it means he has major upside. It means his best days lie ahead of him.

East Rowan’s Joseph Peeler isn’t the best baseball-playing senior in Rowan County, but he may have the highest ceiling. If the coaches voted, Peeler, a 175-pounder who will get stronger, would be voted most likely to succeed in baseball past college.

There are reasons UNC Wilmington signed Peeler before his senior season started. Peeler is nearly 6-foot-6. Tall pitchers throw downhill to hitters, and that’s a serious advantage. Peeler also generates outstanding velocity with smooth mechanics. He’s not straining, but his pitches get on top of hitters in a hurry.

Peeler hasn’t been an overnight sensation with the Mustangs. He was 0-2 as a sophomore. He was only 2-3 as a junior, although one of those two wins came in relief against Carson in the 2014 SPC tournament championship game.

Even as a senior, Peeler is a modest 4-3, although it’s worth noting that in all three of his losses (two to West Rowan, one to South Rowan), the Mustangs failed to score.

“Those were some tough games, and we’ve had tough losses,” Peeler said. “But you can’t let that affect you on the mound.”

Peeler has been pitching since he was 7, and the curveball his father taught him is sometimes as effective as his fastball. He’s hard to hit. He had 70 strikeouts (compared to 18 walks) when the regular season ended. He’s thrown four complete games and two shutouts. Opposing batters are hitting .155 against him, and his ERA is 1.42.

‘He’s really come through for us as a senior,” Hightower said. “Although it seems like when he pitches, we can’t score. He’s even had to knock in guys himself a few times.”

Peeler is a good athlete. He can play first base when he’s not pitching, and while he hasn’t hit for average (.224), he’s hit in the clutch. His 10 hits have produced 13 RBIs.

Peeler has experienced success as a member of the South Charlotte Panthers and Carolina Rockies showcase teams. He’s pitched — and pitched brilliantly — in major tournaments in Georgia and Florida. Pitching for the Panthers last July, he made the  all-tournament team at the World Wood Bat Championships.

“It was in a showcase workout that UNC Wilmington first saw me,” Peeler said. “That’s a school I really was interested in all along, and it’s nice that it’s near the beach.”

“School comes first,” said Peeler, a fine student who’s interested in UNCW’s athletic training program.  “As far as baseball, my goal is to go in there and compete for a spot as a freshman.”