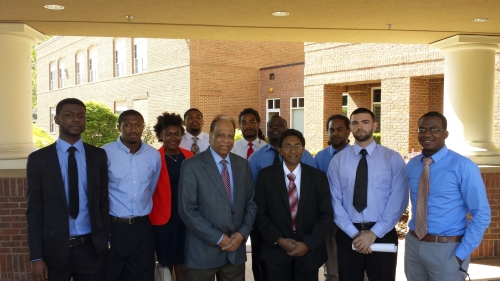 If their performance in the Capstone business simulation is any indication of future success, there’s a good chance that you could end up working for one of Livingstone College’s business graduates some day.

Six groups from the college’s Capstone business class competed against 114 teams from around the world. Two of those teams managed to place in the top 10 for multiple categories, even taking first place in one.

They bested teams from major U.S. universities, as well as colleges in India and Jerusalem.

As the students, most of whom will graduate Saturday, talk about the competition, it’s easy to forget it was just a simulation. They throw around business jargon with ease, talking about how they adjusted this figure and that figure to drive down their competitors’ prices.

This year is the first time Livingstone students have participated in the Capstone simulation.

The college is currently working to get its business school accredited by the International Assembly for Collegiate Business Education, and a simulation competition is one of the requirements for accreditation.

“This is the most sophisticated business game in the world,” said Dr. Colin Pillay, a business professor at Livingstone.

The students competed in eight rounds of competition over a four-week period. They were given new challenges several times a week that required them to make decisions about their simulated business.

At the end of each round, each team can see the top 10 competitors, as well as their own score. They’re also given a 26-page “highly sophisticated analysis” of their work, Pillay said.

The competition integrates all the business principles the students have learned over the course of the past four years at Livingstone.

It also requires the students to develop soft skills such as teamwork.

Two of the college’s teams – Team Chester and Team Andrews — were fiercely competitive.

“I think the key to success was the reports,” Williams said.

The students also said paying attention in class, research and hard work were vital pieces to their success.

He spent hours in the library pouring over the reports each week, playing with numbers and trying to improve his team’s score.

“John showed me more than I was capable of learning myself,” Walker said, adding that the teams spent a lot of time learning from each other.

Williams and Walker will both receive their degree in business administration later this week, and both want to start their own businesses.

“I want to build my own business,” Williams said, adding that he wants to eventually expand into a larger corporation.

The competition was full of “real world competition,” he said. “It gave me insight on what CEOs do.”

“I always wanted to open up a barbershop,” Walker said.

“I feel like I’m better prepared to go into running a business myself,” Williams added.

“It gave them energy and motivation,” Pillay said. “This is capitalism in action. This is survival of the fittest.”