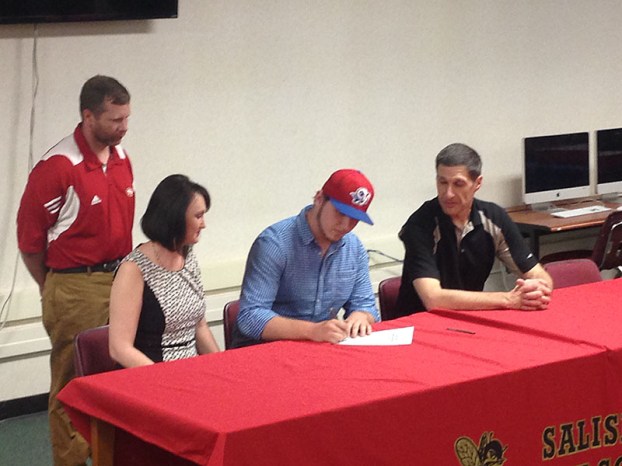 SALISBURY — Cameron McLendon was never a household name in high school, but the versatile, smart and large Salisbury High senior will be part of a college football program this fall.

McLendon, 6-foot-3, 255 pounds, is headed to western Virginia to play for the Bluefield Rams. Bluefield is a small NAIA school with 900 students and is located only 50 yards from the West Virginia line. Bluefield went 70 years between football games, but the program was revived in 2012.

The Rams play in the Appalachian Athletic Conference in most sports, but they are members of the Mid-South Conference when it comes to football. McLendon will play on turf at 10,000 seat Mitchell Stadium and will suit up against schools in Virginia and Kentucky such as Pikeville, Lindsey Wilson and Campbellsville.

“There are a lot of guys that have the ability to play college football,” Salisbury head coach Ryan Crowder said. “But the bigger issue is which guys have the grades and the persistence to further their education. Cameron does.”

The opportunity to play in college arrived relatively late for McLendon. Salisbury defensive line coach J.J. Gwyn has a friend on the Bluefield coaching staff, so he sent film of McLendon to the school. Bluefield was intrigued by McLendon’s ability to play several positions, his grade point average, and his potential.

“I was thinking about going into the military,” McLendon said. “Things didn’t start to happen with Bluefield until January.”

McLendon bulked up from 220 to 255 pounds during his four years at Salisbury. He made his debut on the varsity as a sophomore.

“It was scary that first night because I was playing against a guy who was being recruited by a lot of schools,” McLendon said. “My mentor was (former Hornet) Scott Givens. He really helped me.”

McLendon has played a lot of snaps on the offensive line as well as on the defensive line during his career and has served as the Hornets’ long snapper.

“We may not have appreciated how good a player Cameron was until he got hurt in the Southeast Guilford game, and then we had the kind of issues you’re going to have on snaps with inexperienced players filling in,” Crowder said. “We missed him. We gave up some touchdowns that night on snaps.”

McLendon was injured playing defense in that early October game with Southeast Guilford, tearing the medial collateral ligament in a knee.  He was expected to miss the rest of the season, but he showed toughness by returning in time to help the Hornets in the playoffs.

McLendon plans to major in athletic training at Bluefield.

“Not of lot of guys get the chance to further their education through football,” Crowder said. “Cameron is getting this opportunity, not just for his football ability, but because of his character.”

NASCAR: GoDaddy pulling sponsorship of Patrick at end of season

CHARLOTTE, N.C. (AP) — It’s been at least a dozen years, by Danica Patrick’s count, that she has had to... read more