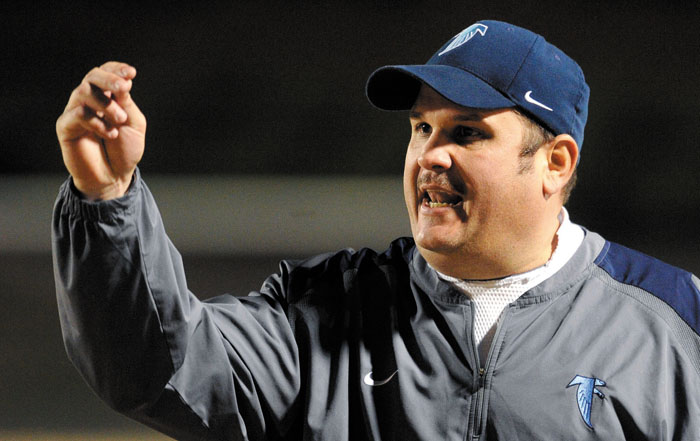 Jon C. Lakey / Salisbury Post file photoScott Young, pictured after leading West Rowan to a big playoff win over Burns High School in 2011, announced that he is stepping down due to health concerns.

Young hates he didn’t get to see his 15-year-old son, Bryant, play jayvee baseball Monday, but West Rowan was on the road at Central Cabarrus, and you can’t be two places at once.

While Monday was business as usual for Young, Tuesday will bring sweeping change to his life. He informed the Salisbury Post on Monday afternoon that he is stepping down as West Rowan’s head football coach.

“I’m stepping down to focus on getting healthier and getting a new heart,” Young said.

Young had open heart surgery on March 31 at Carolinas Medical Center in Charlotte. In a procedure lasting about six hours, a ventricular assist device (VAD) was implanted into his chest to pump blood through his body. Young is currently on a waiting list to receive a heart transplant.

West Rowan plans to introduce its 15th head football coach to the team today at 2 p.m.

It gets a little complicated from there because while Young will no longer be the head coach he still intends to be part of  the West Rowan football program this fall. That’s an indication the new hire is someone Young knows, likes and can work with.

“I will be involved, in some capacity, with West Rowan football next season, although I honestly don’t know at this time what that capacity will be,” Young said. “I’m on leave, and a there’s paperwork to deal with. We’re kind of at the mercy of the rules regarding short-term and long-term disability. All I can say is I want to do as much as I physically — and legally — can do.”

Young, who played football at East Rowan and Guilford,  is only 43, so he was in his mid-20s when he was installed as West Rowan’s coach prior to the 1998 season.

Young has made a formidable impact on West Rowan’s football fortunes and on Rowan County gridiron history. The 13 head coaches who preceded Young in Mount Ulla had a combined record of 147-240-10. Young is 172-54 in 17 seasons. West Rowan has climbed from 93 games under .500 when Young arrived to 25 games over .500.

Young was 8-1 against Carson, 13-3 against East Rowan, 15-2 against South Rowan, 13-0 against Salisbury and 10-2 against North Rowan — for a 59-8 record in intra-county games. West Rowan’s 44-game winning streak in county games, that began in 2001 and finally ended in 2012, may stand as a permanent benchmark for county domination.

“I’m very proud and I always will be very proud of what the coaches and the kids built at West Rowan,” Young said. “It was abysmal when we started.”

Young suffered a heart attack in 2011 and has dealt with health issues since the end of the 2014 season.

But he’s feeling better now and is confident that he is on the road to physical recovery. He explained that there were long months in which he struggled because of “wrong diagnosis and mis-diagnosis,” but the March 31 surgery has put him on the right track.

Young hasn’t ruled out a comeback as a head coach as early as 2016. The one job he’s not open to would be a return as West Rowan’s head coach.

“That wouldn’t be fair to the coach who’s taking over here Tuesday,” Young said. “He’ll be the new head coach of the Falcons going forward, but football is still in my blood and I’ll never get football out of my system. I still have coaching goals. I still would like to coach at the next level some day.”

Young’s 172 coaching wins are second all-time in Rowan County to the 183 compiled by legendary S.W. “Prof” Lancaster in 30 seasons at Salisbury’s J.C. Price High. Lancaster’s teams were overwhelming in the 1940s and early 1950s.

“I really believe I’ve still got some wins in me,” Young said. “And winning more games than anyone has won in Rowan County  — that would mean something.”

The future is foggy, but when you get right down to it, health is all that really matters.

So Young will focus on getting well — and he’ll watch his children play ball.