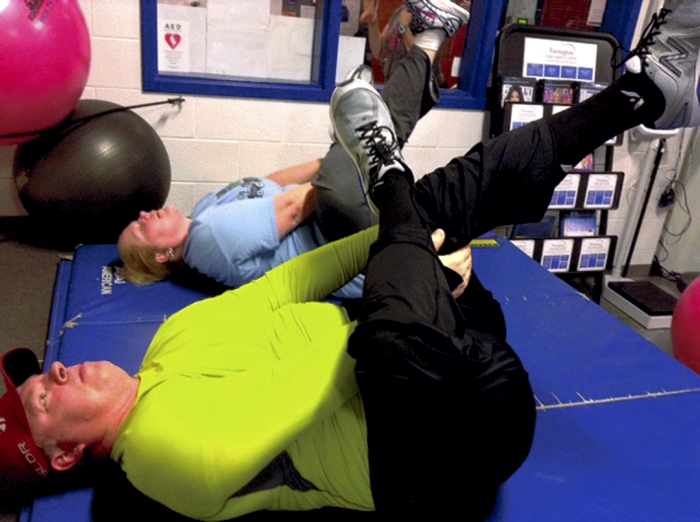 Brent Parks and Norma Honeycutt do stretches following a workout. David Freeze, for the Salisbury Post.

Brent Parks and Norma Honeycutt have reached the first major milestone timewise in their weight loss journey. Lots of new experiences have been a big part of the first 12 week program just completed on Monday morning.

Just last week, both Brent and Norma participated in two group classes that they never would have considered even a month ago, much less at the start of their program. To begin with, I just wanted to introduce them to a healthier lifestyle that included better nutrition and regular exercise. We started with the basics for the initial exercise and have added difficulty as the time has passed.

That is how we progressed enough to take on two of the more intense classes offered at the JF Hurley YMCA, both in that all-important 12th week. Brent wanted to take a class with Ester Marsh, YMCA fitness director and one of the fittest people around. Brent and Norma were both able to take Friday morning’s “Esterciz,” a mixture of weights, steps, a little cardio and strength exercises. Norma was especially apprehensive. Ester uses a lot of planks and crunches, but mostly it’s her personality and encouragement that keep the class moving and improving. Each segment of exercise is based on the length of a song. More than once, Ester said, “I’m ready for this song to be over with!” She constantly offered tips about breathing, keeping shoulders level and a reminder that the head is an extension of the spine. About midway through, Norma was heard saying, “At least she ain’t killing me.”

On Saturday, both Brent and Norma joined Ruthie Cristman for their first spin class. I keep asking them both what new exercises they want to do. Neither really wanted to do a spin class but were willing to give it a try. Ruthie has been teaching spin for about two years and is a fantastic instructor. She asked Brent and Norma to arrive early to get set up for the class. Ruthie took time to adjust the bikes for them, both with the correct handlebar and seat height. She also added a gel pad to the seat to increase comfort for new riders. Spin bikes are very similar to regular bikes with the main difference coming in how hills are done. A tension adjustment can quickly take the rider from flat riding to a major hill. No gears are involved. Once the bikes were set up correctly, Ruthie told them, “Do what you can comfortably do.”

The hour-long class proved to be a tough workout for my fitness duo. They simulated a hard ride with lots of hills, sprints and plenty of encouragement to give 110 percent. Brent and Norma followed Ruthie’s instructions to get up, hover, and then have a seat, always with the legs still moving. Norma did well in the spin class, and Brent battled some soreness left over from Esterciz. This was their best calorie burn per hour of exercise, and in my opinion it was the best workout of the journey so far. Brent said, “My arms, legs and butt were sore afterwards, but I will do it again.”

The ending result for the total weight loss was tabulated based on a weigh-in Monday morning. Brent has lost a total of 23 pounds for the 12 weeks, slowing considerably in the last two weeks. Brent is a CPA and is just about to conclude another tax season. He sees tax season as an obstacle to his progress but assured me that he will be back on track with sensible eating and daily exercise later in April. He still needs to get a better handle on his intake of calories, often eating more than he realizes.

So far, Brent considers circuit training as the hardest workouts. He wants to get involved soon in more outdoor cardiovascular workouts including hiking, walking and biking.

Norma has kept up more consistent exercise than Brent, but her total weight loss for the 12 weeks is less at 20.2 pounds. She is smaller of course, but has had significant increases in balance, strength and overall fitness. She is also a little more adventurous and competitive.

Norma considers the hardest thing so far has been entering into the group classes, but then she has made an about-face to admit that the group classes are the most fun. Her biggest obstacle to success has been continuing the momentum at a high level. She especially enjoys doing the same class multiple times while measuring her improvement. Norma also enjoys encouraging her staff to exercise with her. Partners in Learning is experiencing one of its best weight loss quarters as well.

During April, Norma wants to continue to lose a pound a week minimum and to walk at longer distances as the weather continues to improve.

I will be back to report on Brent and Norma again near the end of April. So far, I’m pleased with the overall progress. Both have earned their first incentive-based gift certificate, valued at $50 each, for losing over 20 pounds from Father and Son’s Produce on Sherrill’s Ford Road. Brent’s fast start has now become Norma’s fast finish for this segment and with this writing, she has the momentum. Norma actually walked for close to two hours one afternoon last week and is tracking her caloric intake daily. She said, “Brent isn’t that far ahead!” Their goal for the next 12 weeks is yet another 20 pounds lost each. If both achieve it, they will be in new territory. With that said, Brent mentioned that he has especially enjoyed meeting all the new people who have joined with friends to encourage further progress. I am sure that Norma feels the same. Lots of good people are supporting them. If you see them around, let them know.

See you in a month!