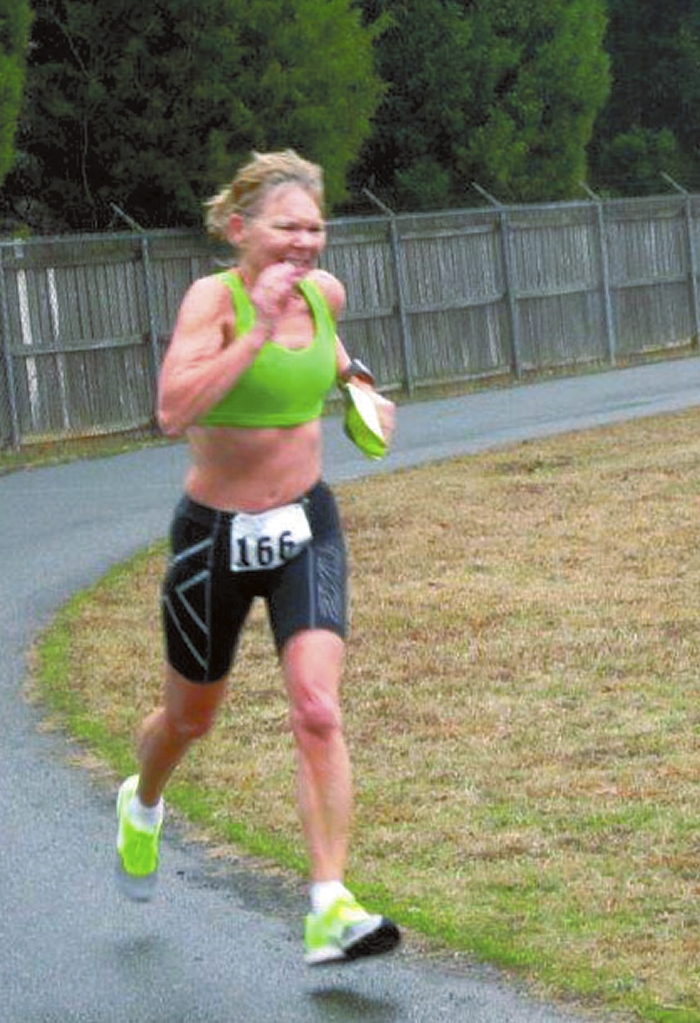 Trudy Gale pushes hard to the finish to get the Road Runners Club of America Grand Masters Championship. Photo by Terry Smith.

Dr. Acquawon Stallworth of Salisbury was the top female in Saturday morning’s St. Patrick’s Day 5K that is organized by the Salisbury Fire Department. The 5K, held at the JF Hurley YMCA, served as the Road Runners Club of America North Carolina Championship. Stallworth regularly competes well in the “over 40” age group but was pleased with her win. She said, “The opportunity to wake and run hard with fellow runners is special, but to do it for a good cause and excel is truly a blessing.” Stallworth’s time was 23 minutes and 3 seconds.

Peter Deucher of Asheboro was the overall winner with a time of 17 minutes and 35 seconds. Deucher said, “I loved the course. It was well marked and ran really well.”

Wayne Crowder, winner of the 65-69 age group, said, “It was a good morning for a race. There was no wind and the cool drizzle made for good running conditions. And I love that last mile which is mostly downhill.”

Race director Terry Smith said, “I was pleased that so many runners came out to support our event. Our volunteers and sponsors were great. We are pleased to have such a wonderful partnership with the JF Hurley YMCA, the Salisbury Rowan Runners, the Salisbury Fire Department Auxiliary and the Salisbury Police Department.”

All proceeds from the 5K go to continue the restoration of a 1947 American LaFrance ladder truck, one of the first pieces of equipment used by the Salisbury Fire Department and now called “Aerial One.” Fire Chief Bob Parnell said, “We are very close to having that truck able to drive up and down the road. A lot of the cosmetics will take a while longer, but the mechanical portion of the truck is just about done.” The truck will be used for official fire department and City of Salisbury events once it is fully restored.

Complete results are available at www.salisburyrowanrunners.org