David Freeze: It’s become a test of character with plenty of support 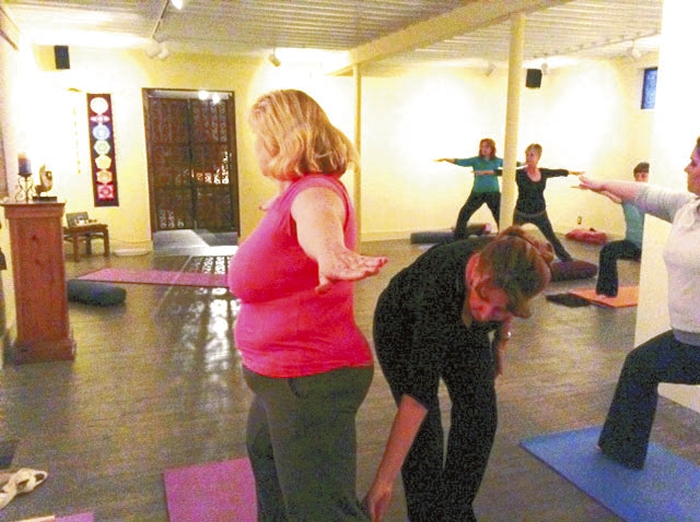 Weather issues have played havoc with the ongoing wellness journey of Brent Parks and Norma Honeycutt. All the special plans that we had over the last ten days were wiped out because the instructors were not available or the place of business was closed due to snow or ice.

We started off this past Monday with a recap of one of the most popular workouts from the previous weeks. Both Brent and Norma like the circuit training that allows them to incorporate strength, agility and a serious cardiovascular workout. They had done the same workout a couple of times before, the first one with Hurley Y personal trainer, Tammy Swicegood. Both have made tremendous improvements since that first effort. Brent and Norma will work out with Tammy again this morning. Like all good personal trainers, she will find a new way to challenge them this time.

During the snow, Norma went sledding for the first time in at least 20 years. She said, “I know it has been at least since the boys were small.” It is just one more of things that she wants to do when weight doesn’t hold her back.

This past Tuesday, Brent had an appointment with his doctor, the same one that had earlier told him that medication for diabetes and high blood pressure were just around the corner unless a big change was made. That is exactly what Brent did. All of the major issues that started this journey have shown improvement.

After several attempts to schedule the three of us to visit Artemesia Yoga Studio, Norma and I made it finally on Thursday evening. Lewellen Daniel Padgett is the owner and certified Sivananda instructor and had invited us to her class while we were taking a Zumba class through Salisbury Parks and Recreation.

Brent didn’t make the class, but Norma did. I finished one of my own fitness classes that afternoon and joined the yoga group in progress. Many years ago, I had taken yoga to help with a very tight core that comes from years of running. My hamstrings were so tight after thousands of miles that I had a lot of trouble crossing my legs and used multiple mats to help. I did know that yoga has a lot of positives and hoped to hear more from Lewellen as she taught classical yoga to Norma and her regulars.

Lewellen encouraged the class with lots of statements that she backed up with different poses. “Breathe and relax. Train your body to react to stress. Every exhale is releasing stress,” said Lewellen. Her voice was calm as she urged Norma and the class into their various poses.

Often during the class, Lewellen quietly helped Norma position herself and occasionally used props to get the best result. Various poses were meant to address the spine, hamstrings, neck, shoulders, Achilles, knees, arches and sciatic space. Each pose had a counter pose. Everyone was encouraged to “exhale and surrender. Yoga is where you bring the body and mind back together.”

Lewellen said, “We keep coveted energy in the body all day long. Breathe and open your heart. Exhale with a sigh. Squeeze the belly. Roll your shoulders.” The session ended with “Final Relaxation,” using soothing music, a drop of lavender on the forehead, an eye bag, a belly bag and plenty of time to align your mind and body on waves of breathing.

At our workout on Friday morning, Norma said, “It was better than a massage. Almost like a massage and physical therapy combined. I can’t say enough about how much I enjoyed it. Since I work with kids during the day, I know that yoga will help me get up and down with the kids on the floor.”

Later on Friday, I asked both Brent and Norma for a few thoughts on their intermediate goals. Now at the end of nine weeks, we will soon complete our first timeline. Originally, Brent and Norma were challenged to lose 20 pounds in the first 12 weeks by controlling caloric intake and adding a daily exercise regime. Brent has lost 20 pounds currently and Norma is at 13, leaving her a tough seven to go. If they make it, Father and Son Produce on Sherrill’s Ford Road has another gift certificate waiting for them.

Past that, Brent is planning a cruise just after tax season ends. He wants to lose 15 more pounds by May 1. Brent said, “When we got started doing this, we could only do the elliptical for five minutes. Just a few minutes on the bike wore us out.” On Friday morning, they did 40 minutes on the stationary bike and 10 more on the elliptical.

Norma wants to get the seven pounds done, and then she has bigger plans. Norma said, “I still want to lose at least 52 pounds for the whole year. But the biggest thing for me is to eventually not have to shop in the fat woman’s section. When I go shopping with my friends, I want to shop with them in the same part of the store. I have to be in size 16-18 to do that. I am getting close.”

Brent added, “We have to do this for ourselves now. It has become a test of character. I am grateful for all the support from those who come to my office or that I see in other places. I really appreciate it.”

With her usual quote of the week, Norma agreed. She said, “Yes, it is a privilege to have all of this support in our journey. It has been fun. What hasn’t been fun is that sweat keeps running down my back. I never liked sweat and can’t understand why romance novels make it so glorious!”

After that quote, it is pretty obvious that I have more work to do. I will report on Brent and Norma’s journey again in three weeks, just in time to see if Norma makes her goal of 20 pounds lost and if Brent gets a good start on his next 15. See you then!