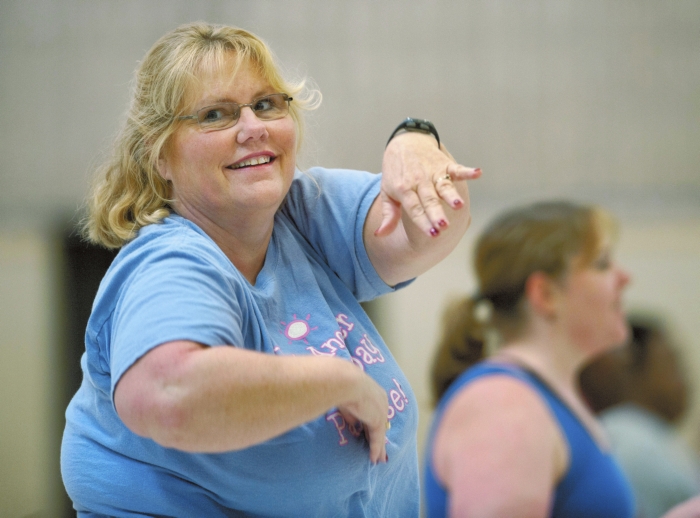 JON C. LAKEY / SALISBURY POST Norma Honeycutt takes part in her first Zumba class in part of their Get Healthy initiative to loose weight and improve her overall health. on 1/21/15 at Civic Center in Salisbury, NC, .

This is the fourth in a series of columns that will follow Brent Parks and Norma Honeycutt throughout 2015 following their resolution to establish better health. They will do this by controlling their weight and implementing an exercise program for better cardiovascular health. Both Brent and Norma are committed to heading off chronic diseases such as diabetes and heart disease that usually accompany severe excessive weight.

Today marks three weeks completed in the journey of Norma Honeycutt and Brent Parks as they continue their commitment to better health. Momentum is building and their efforts are starting to pay off.

Highlights of the past week included a fast-paced circuit training workout with YMCA personal trainer Tammy Swicegood and an even faster paced Zumba workout with Tracey McKenzie at the Civic Center. Throughout it all, Brent and Norma kept achieving and smiling. I can’t ask for much more.

Norma got to sleep an extra hour when we scheduled the workout with Tammy for Tuesday. Tammy showed Brent and Norma pictures of herself as a much heavier person and encouraged them to stay with the program. She did body measurements next that included the chest, waist, hips, thighs, calf and several pinches. Tammy then took them to the circuit training area on the upper level of the Y. Tammy explained that these machines had worked well during her own weight loss. A series of one minute step and machine workouts were mixed with hustling a lap around the track. Red faces and easy sweating showed the intensity. Norma was heard to say, “I can’t wait till I can get the hell out of here.” She did keep grinning through her fogged up glasses.

As the workout was nearing a close, Tammy told them that she had gained seven pounds herself over the holidays and was working to get rid of it. She said, “Once you have had the excess weight in your life, the fat cells are always waiting for another chance. I have to stay ahead of them.” Tammy is a half marathoner and regular cyclist besides teaching high intensity YMCA classes. Brent and Norma were both inspired by Tammy and look forward to working with her again.

Zumba has been around for about 10 years now. There are as many different levels of Zumba intensity as there are instructors. Tracey McKenzie moved here with an exercise science degree from Ohio State just as Zumba was taking off and now mixes her exercise knowledge and dancing ability to generate a fantastic group workout. She is at the Civic Center on Mondays and Wednesdays and at the City Park building on Saturday mornings. All of this is through Salisbury Parks and Recreation. Tracey is an accomplished marathoner as well.

Norma brought Emilie Scharf and Samantha Graham from Partners in Learning and Brent brought his wife, Wanda. They exercised through a hectic hour long workout characterized as “Zumba on crack” by Linda Bost. Tracey and several of the regulars made the new group very welcome and then congratulated them afterward. Norma said, “We’ll be back!”

After daily cardio workouts, walking and another circuit training workout with me, the dynamic duo closed out another interesting and successful week. Part of the discussion among the three of us has started to focus on goals, both short term and long term. We have agreed that the short-term goals are to improve nutrition, get a handle on calories and make daily workouts a scheduled and expected part of life. Brent and Norma want to lose 20 pounds each in the first 12 weeks.

Long-term goals, focusing on a year from now, opened a lot of discussion. Brent said, “Life after a year on this program looks like this for me. I want an active lifestyle, running 5Ks or even half marathons, and biking and swimming. I will be energetic, confident, balanced and with less stress. All this makes my health a number 1 priority.”

Norma said, “I envision being 52 pounds lighter. I want to be able to try lots of new adventures like horseback riding and zip lining without worrying about weight restrictions. Basically being a new improved me!”

Today, we will visit Ralph Baker’s Shoes and Ralph Baker Jr. Both Norma and Brent need new shoes. I think they both have pronation issues, causing the feet to roll out during running and walking. Proper shoes have to fit the width, arch and exercise goals as well as the length. We all laughed about having fitness shoes that have had very few workouts, mostly being used for other things or spending weeks in the closet. Going forward, both will have the proper shoes to provide stability and cushioning for increased effort workouts. Brent and Norma will soon begin spending more time on their feet with weight bearing exercises.

On Thursday, we are going to the Forum to meet with manager Rayna Gardner and for a workout with trainer Melissa Shore. Brent and Norma are always open to new things.

I previously mentioned long-term goals. For now, we are taking it a day at a time, a week at a time. Short-term goals will be the current focus, and I am now tracking results based on the starting point. Brent has lost 10 pounds and Norma has dropped eight in three weeks of aggressive effort.

But bigger than that were the other statements they made this week. Norma said, “It is exciting. My fear was that I couldn’t do it. Already I have more energy, my body is starting to catch up with my brain. I’m staying away from my cell phone because these workouts are more important.”

Brent agreed: “My energy level is up as well. I’m dedicated to my health. My anxiety level is lower because there is a certain peace that goes with the priority of a healthier lifestyle.”

With all that said, Brent and Norma are looking forward to week four on the way to the rest of their lives.