David Freeze column: They Are “In It to Win It” 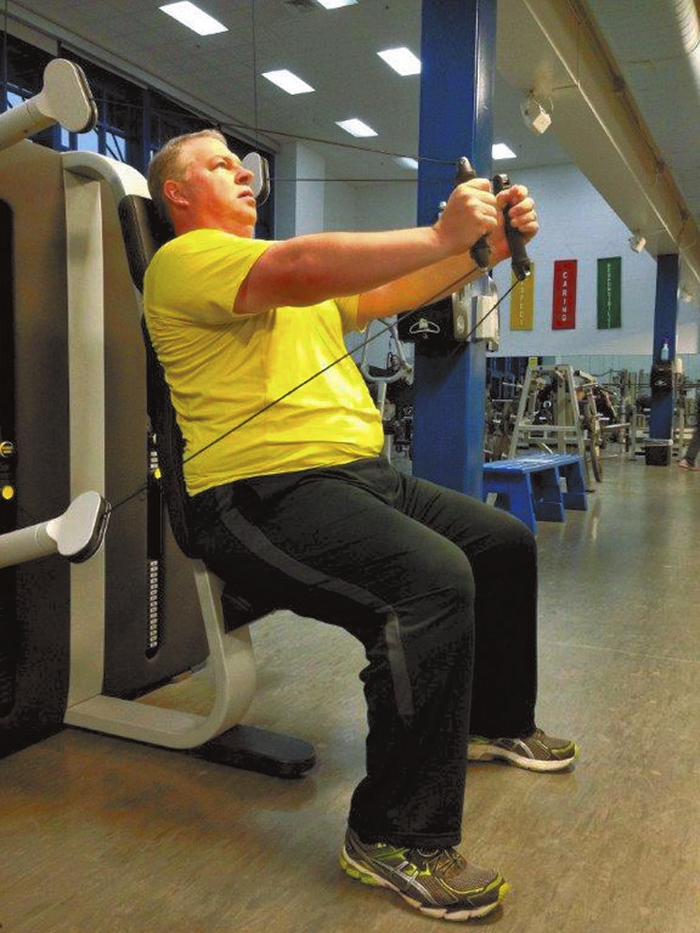 Brent Parks works out at the JF Hurley YMCA. Photo by Sarah Parks.

This is the second in a series of columns that will follow Brent Parks and Norma Honeycutt throughout 2015 following their resolution to establish better health. They will do this by controlling their weight and implementing an exercise program for better cardiovascular health. Both Brent and Norma are committed to heading off chronic diseases such as diabetes and heart disease that usually accompany severe excessive weight.

As previously reported, I met with them early on Monday, Jan. 5, for an introduction to their exercise program. Brent and Norma got a sweat going after Ester Marsh’s instruction on several cardiovascular machines at the Hurley YMCA. Sweat looked great on both, and I told them to get used to it.

That same afternoon, we visited Novant Health Rowan Medical Center for a series of screenings that gave us a baseline for the start of their program. Those screenings included blood pressure, blood sugar, weight and Body Mass Index. My friends at the hospital, including Val Velte and Jessica Ijames, provided the short notice screening. But they wanted everyone to know that these screenings are free and available by scheduling them at 800-335-4921 and only take about 30 minutes to complete.

With that busy day, Brent and Norma were off to a good start. A remarkable difference in their first week began on Tuesday. Brent was on hand for another early round of workouts on the cardio machines at the Y. He did basically the same workout that he completed Monday and slightly increased the intensity. Norma headed for Florida and the beginning of a cruise that was a gift from her husband, Mark.

Norma said, “This cruise isn’t going to be about the food like the past ones have been. We split our first breakfast. I plan to walk a brisk mile every day and work out in the fitness centers at the hotel and on the ship. I plan to swim daily as well.”

At Partners in Learning, Norma supervises of a staff of more than 40 administrators, teachers and support personnel. They have all been part of their own wellness program for the last three years and are supporting Norma on her quest. She said, “I’ve been getting invites on My Fitness Pal all day from the staff. This is exciting.”

My Fitness Pal is an app and a website that allows users to log their food intake accurately and thus count the incoming calories. Just go to www.myfitnesspal.com and log in for nutritional information on over 2,000,000 foods. As I always say, “Weight loss is a simple result of calories in and calories out. There are no gimmicks.”

The flip side of My Fitness Pal is that those calories out can also be logged. Imagine this, for example — running or briskly walking a mile burns about 100 calories and eating a banana adds the same. By the end of the day, most people need to have a net result of 1,600-2,000 calories. More exercise adds the amount of calories that can be ingested, but the opposite is the same. Eating too much means that the only way out is to exercise more. But this only works to a certain extent. When the goal is to lose one pound a week, that means that 3,500 total calories must either be burned or not eaten in the first place. That is 500 calories less per day, but Brent and Norma’s plan will roughly allow them to lose about 1 ½ pounds a week, or just under 20 pounds, over the 12 week program. I will explain this more in next week’s column.

Brent is also experimenting with My Fitness Pal and went to pick up a fitness tracking device on Saturday night. It will help him compute the calories eaten and burned and provide information on other activities, including some that report on the quality of sleep. Most work without the use of a satellite, meaning that they can work indoors and some even in the pool. Brent had five workout days this past week and today will begin his plan for this second week.

Norma has been on a ship and is scheduled to return to port today. She is already an expert at counting her calories, and she takes the approach I fully endorse. At this stage, the total calories are more important than the exact make-up of them. I have found that when making a major lifestyle change, better results come from setting a calorie limit and sticking to it, even if the result is that a special treat is part of the result. Norma reported, “On the ship, I am going to attempt to eat no sweets and lots of fruits and vegetables. If I do eat a dessert, I will make sure it fits within my calorie total.”

With all this said about calories, more important in the long run is proper nutrition. We plan to get a jump start on that this Friday. First up on Friday afternoon will be a visit with Lisa Westfall, a dietician for Novant Health through Morrison’s Food Service. She will offer information and answer questions from Brent and Norma about nutrition as they get accustomed to exercising daily. Next we will head for Harris Teeter for a grocery store tour with Val Velte, Corporate and Community Wellness Nurse at Novant Health. Finally, we will visit with Tim and Linda Hoffner at Father and Son Produce for information on availability and benefits of fresh produce.

The journey is under way. Brent and I will be at the Y on Monday. Norma will join us by mid-week. Stop by and encourage them. Thanks for your support.