Freeze column: They chose to make their resolutions last 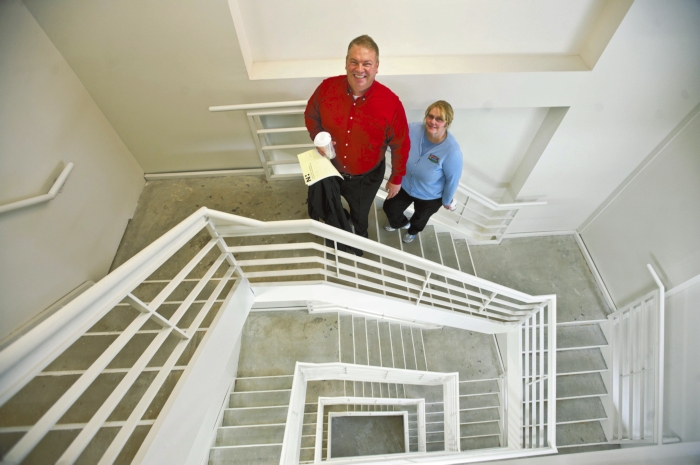 JON C. LAKEY / SALISBURY POST Brent Parks and Norma Honeycutt have started off the new year with hopes of getting more active and healthy. The pair came to Novant Health Rowan Medical Center to have to have an assessment on their starting conditions with a check of their weight, body mass index, A1C (pre diabetes assessment), blood sugar and blood pressure by wellness nurse Valerie Velte,RN. on 1/5/15 at in Salisbury, NC.

We have all made resolutions, and most of them have not worked out like they should. Those resolutions that require a real lifestyle change are the hardest from which to develop a lasting habit. Losing weight, by most accounts, is the most popular and least achieved of resolutions. Two of my friends have decided to give it their best effort, and they are just fine with the community knowing about it.

Norma Honeycutt, executive director at Partners in Learning Child Development Center, and Brent Parks, owner of Brent Parks, CPA, have decided that 2015 will be the year that their desire for better health becomes a reality. They have various reasons for their commitment that another year won’t go by without a major wellness turnaround. One of them is me. But I will explain my part shortly.

Both Norma and Brent are in their early 50s and have battled weight issues for a long time. Norma and I go to church together and have done that since about the time that electricity was invented. I am the wellness coordinator at Partners in Learning, and that position allows me to see Norma’s passion for her staff and the kids that the center services.

“I have been at PIL for 17 years and I absolutely love it. I can’t imagine doing anything else,” she said. Norma has been married to Mark Honeycutt since 1980 and has five children and four grandchildren.

Brent has been a CPA for 28 years and owns a successful firm that services the community with financial, accounting and tax solutions.

“I enjoy working with clients and helping them to solve problems,” he said. Brent’s wife, Wanda, also works at the firm, and the couple has two children in college. Brent Parks, CPA, handles the accounting for the Salisbury Rowan Runners and Wanda is an avid runner. I realized right away that Brent has a real passion for his work, as well.

After several conversations this past Friday, I made my own commitment to join Norma and Brent in their 2015 resolution to make a lifestyle change that would allow them to lose weight and derail the likelihood of developing chronic illnesses such as diabetes and heart disease. My part in this long journey will be to provide the coaching and proven methods that they will need throughout the long haul. But I won’t stop with that. Salisbury and Rowan have many fitness professionals willing to play a part. I plan to get many of them involved.

I asked both Brent and Norma last Friday if they would be willing to let Salisbury Post readers share in the process, and they both readily agreed. All of us hope that by making the effort public, two things will happen. The greatest of these is that there will be an accountability that will be much more than with just a single personal trainer and coach. Almost as important is that Brent and Norma want others to see that two regular people can enter into a long and successful wellness journey. They hope their positive strides will motivate others to start the process. I told both of them to remember Friday, Jan. 2, 2015, as they day they chose to change their lives and maybe a few more along the way.

What are their goals? Both have similar goals pertaining to their health issues. Brent and Norma want to lower their blood pressure and blood sugar, and lose weight. But they really want more. Brent wants to eventually be able to run with his wife when they travel. Norma wants to be able to climb stairs, walk long distances without being out of breath, and ride her bike. Both had at least considered lap band or gastric bypass surgery but want to lose weight the natural way.

At this point, I won’t say how much either Brent or Norma weighs, but they both have a long haul to get back into the normal category for BMI, or Body Mass Index. Both have concerns about blood sugar, with Brent’s doctor telling him that treatment as a diabetic is just around the corner. They want to manage their health and have taken the first steps toward that goal.

Brent, Norma and I met early with Ester Marsh at the JF Hurley YMCA and listened to her suggestions about the best fitness machines to use for low impact cardiovascular conditioning. Ester was a valued fitness professional providing momentum, but she won’t be the last. Brent and Norma spent 10 minutes each on a NuStep machine (a recumbent stepper with arm motion), an elliptical with arm motion, and a stationary upright bike. They talked with regular Y workout folks like Jason Walser and Cora Shinn, who both encouraged them to keep at it. We discussed the importance of heart rate monitoring for exercise just before a short walk, and some stretches closed out the morning’s workout.

The highlight of the afternoon was a series of screenings at Novant Health that included blood pressure, weight and an A1C test to monitor the likelihood of blood sugar issues. Novant Health Wellness Coordinator Val Velte explained the results and risk potential and made plans to do a quarterly check on their improvement now that exercise and better nutritional choices will be made. Jessica Ijames and Dennis Barber opened the cardiac care facility for both to see.

“This is extremely nice,” Brent said, “but I don’t want to be a patient the next time I see it.”

So, the journey begins. My columns will keep everyone posted on Norma and Brent’s progress as you learn more about them. You will meet some of the fitness professionals in the community and learn what they can offer. If you see Brent and Norma around, take time to encourage them. It will mean a lot, especially if one day they can be the ones to pay it forward.