Students donate to Toys for Tots 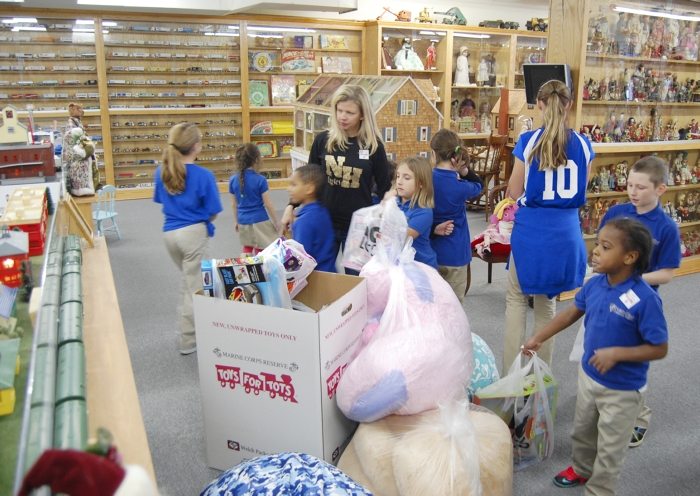 Students from North Hills Christian School drop off donations for Toys for Tots at the Spencer Doll and Toy Museum Friday.

SPENCER — It’s hard to think of a better place to donate toys than at toy museum.

And when it’s children making the donation, well, the moment is even more special

About 50 students from North Hills Christian School dropped off toys at the Spencer Doll and Toy Museum Friday afternoon. The donations will go to Toys for Tots. The museum has been serving as a drop-off point.

The students, fifth and first graders, did chores to earn money to buy the toys. The youngsters bought nearly $650 worth of toys.

Each fifth grader is paired with a first grader as “reading buddies.”

“It’s a nice way to tell them ‘Merry Christmas,'” she said.

“They blow me out of the water every year,” he said.

Staton said all children should be able to have toys.

First grade teacher Dana Birkhead said as a Christian school, North Hills teaches students that Christmas is about the gift of Jesus, and, in turn, people should give to others.

This the second year students from North Hills have made donations to Toys for Tots. Before, they were helping the Rowan County Salvation Army.

Beth Nance, who owns and manages the toy museum, said toys can be educational and that they help children learn to interact one another.

After dropping their donations in the basket, the students spent time checking out the giant model train set, hundreds of classic dolls and other items in the museum. FIfth and first graders from North Hills Christian School donated nearly $650 worth of toys to the Rowan County Toys for Tots program Friday. The toys were dropped off at the Spencer Doll and Toy Museum.