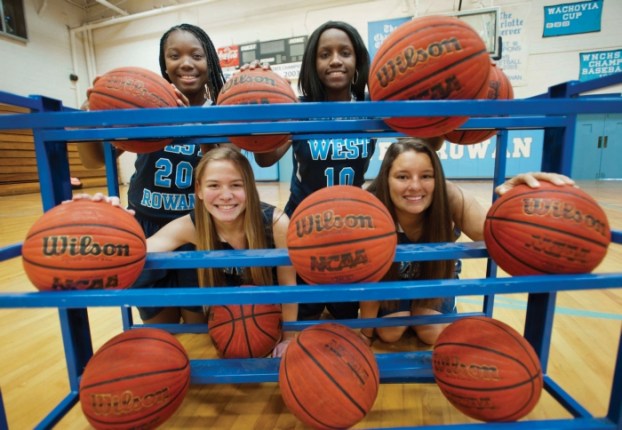 “It was very disappointing,” she said. “We only won seven games and our expectations were much higher. They didn’t show what they were capable of. There was a chemistry problem in there. But mostly, we didn’t finish games.”

A case-in-point was the season finale, a 51-48 first-round playoff loss at South Rowan. West Rowan led entering the final quarter, only to lose for the seventh time in its last eight games.

The season, however, went out on a positive note. Poole gave birth to a daughter a week after that loss.

Now it appears that excitement has carried over. West Rowan is a battle-tested, junior-laden team that hopes to contend in the South Piedmont Conference. The headline player is Khaila Hall, a 5-foot-10 forward whose sandpaper-to-silk transformation made her the county’s second-leading scorer (16.4 ppg) last winter.

“And she’s gotten better over the summer,” Poole noted. “She worked on her shooting and being a leader on the floor. She didn’t do enough of that last year. Other than that, she didn’t really need to work on much.”

The Falcons will build with Hall, not around her. Junior Shanice Miller will line up somewhere after appearing in 23 games last season and cracking double figures in 10 of them. They’ll find out how big a 5-foot-1 shooting guard can play when junior Taylor Martin (11.3 ppg) returns as a second-year starter.

If 5-11 senior Diamond Lovell and six-foot junior Hannah Mosley emerge as front-line forces, West Rowan will be a tough matchup for anyone. And Poole will certainly find room for 5-foot-8 senior Sierra Charles, a Salisbury transfer who plays bullet-proof defense.

Poole loves what she sees so far, but the Falcons are still under construction.

“We just need to work as a team,” Poole said. “That’s our weakness right now. This team should be able to contend by the end of the year.”

The county’s best junior. Only South Rowan’s Avery Locklear boasted a better scoring average last year. Long and lean, she can take over a game with a first step that often seems like two. Should surpass 1,000 career points around mid-season.

The team’s best shooter, she netted 17 points against three different opponents last year. A slick ballhandler, she can also dish and defend. Don’t lose her in a crowd.

Averaged 8.9 points per game as a sophomore. Poole says she’s become a well-rounded player who can contribute at both ends of the floor. Davie County girls: A new day for the War Eagles

By Brian Pitts The Davie County Enterprise Record Every year players and coaches clench their collective fist and say, this is the... read more