East Rowan boys: Tired of being the doormat 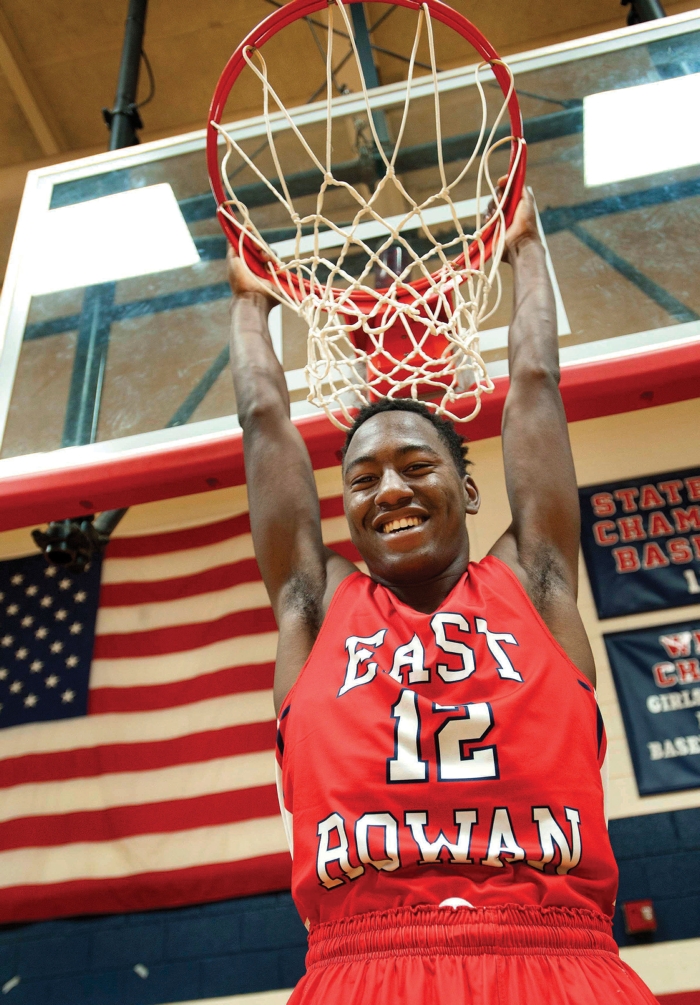 There is no rear view mirror in the East Rowan basketball locker room this season. The Mustangs are looking ahead not only for significant improvement but a measure of respect.

“We have been the doormat in the South Piedmont Conference the last two years,” head coach Trey Ledbetter said. “I am sick of it and I know are kids are sick of it. We have busted our humps in the offseason, and we have had a great summer.”

The Mustangs suffered through a 4-18 season last year (2-14 and last in the SPC). Now they return six key players from that squad, add three stars from their successful JV team, and welcome a talented young transfer from North Hills Christian. A conference title is not a realistic goal but a playoff spot may be possible if everything falls into place.

“First of all I think this is one of the most athletic teams East has had in a long time, and that is from top to bottom,” Ledbetter said. “We are not a big team but the SPC is a guard-heavy league that reminds me a lot of the ACC. It’s all about the point guards and the shooters.”

The six experienced returnees are all good shooters including four who started significant games last year: guards Sam Wyrick (6-0), Austin Wyse (5-10) and Austin Love (6-1) plus 6-2 wing Naquis Caldwell. Also back are top reserves Seth Wyrick (6-0), the sixth man, and Simon Soles (6-2), both seniors. Up from the JV squad are three who will contribute immediately. Junior Bravon Goodlet (5-10) will take over at point guard, 6-2 sophomore forward Datavian (Tay) Davis,  and junior sharpshooter Logan Shuping (6-0) is a long range threat.

Coming in from North Hills Christian is 6-2 combo guard Ian Bradshaw who will play the wing for East Rowan.

“I had not seen him play,” Ledbetter says, “but he is one of the smoothest players I have seen in a long time.”

Another new player, 6-5 junior center Corbin Elliott, gives the Mustangs both size and length inside.  Junior Cody Meadows and sophomore Lucas Morton give the Mustangs additional depth at guard.

“Generally I think there is a lot of excitement in the program this year,” Ledbetter says. “All 13 of our guys really like each other and I think that is 95% of high school basketball.”

The Mustangs started last year 2-0 then lost 15 of 16. But their other two wins during the season showed their potential for the future as they twice defeated a talented West Rowan team.

“Everybody knows we will be a scrappy team, but we have proven nothing to the SPC in the past,” Ledbetter said. “Our goal is to elevate our play to a higher level and compete.”

He provides the team the same level of leadership he gave as the record-setting quarterback. “Sam is somebody we depend on to do it all, points, rebounds, scrappy play and defense” Ledbetter said. Wyrick averaged 7.1 points per game last season and is a threat inside and outside.

Caldwell went on an offensive and rebounding rampage in 13 games last season, scoring a double-double in points and rebounds in several games before leaving the team in the latter part of the year for personal reasons. Ledbetter notes he has matured a lot and knows he will be counted on for consistency and mental toughness.

Davis is a young sophomore whose athletic ability makes him an inside scoring and rebounding threat as well as a ball handler. “I look for Tay to be an impact player from the first game and to do big things for us right out of the gate,” Ledbetter said.

Love averaged 8 points per game last season and has always been a pure shooter. Ledbetter is trying to mold him into a more complete player to expand his game and help the team more. “We have really been working on his defense and rebounding because he has really good size and is actually still growing,” Ledbetter said.

Like his fraternal twin, Seth Wyrick has been a consistent performer for East Rowan the past two seasons. He battled health issues much of last season but still averaged five points per game primarily coming off the bench as the sixth man. “I look for Seth to get back to the way he can really play this year,” Ledbetter said. “We expect big things from him.”