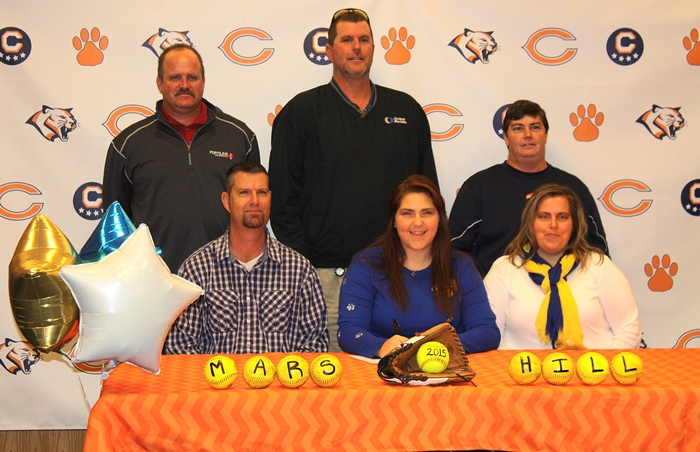 CHINA GROVE —  Carson senior Lacee Hunsucker’s left knee was cleared for a return to pitching duty in October, an event that will make the Cougars a contender in the South Piedmont Conference this spring.

Hunsucker, who signed a National Letter of Intent with Mars Hill last week, didn’t have a junior season. She suffered the knee injury in the fourth game of the 2014 campaign. She was finishing off Carson’s fourth straight victory and had an ERA of 0.31 when she felt something buckle in the knee and fell flat on her face. She got up, dusted herself off,  took a breath, let another pitch go — and fell again. That’s when she knew something was terribly wrong.

“I remember walking off the field, with fans crying and my teammates crying,” Hunsucker said. “That was a rough day. We were hoping it was just a sprain, but the MRI showed that a tendon had given out. They told me I’d be out six to nine months.”

Carson limped to an 11-10 season, finished in the middle of the SPC pack and lost in the semifinals of the conference tournament to eventual champion West Rowan and in the first round of the 3A playoffs.

“It was even harder to replace Lacee’s hitting than her pitching,” Carson coach Dee Miller said. “We missed that clutch bat in the middle of the lineup. I’ve coached Lacee since she was a seventh-grader, and she’s always pretty much dominated.”

Hunsucker started playing softball when she was 5 years old. She remembers pitching for the first time as a third-grader. She played on a series of high-powered travel-ball teams that won state and national championships before and after she got to Carson.

As a Carson freshman, she batted .366 and smacked four home runs.  She walloped a homer at West Iredell that might still be going.

“It went over both of the fences there,” Hunsucker said. “They never found the ball.”

As a sophomore, she struck out 188 batters in 153 innings and posted a 1.51 ERA.  She threw a two-hit shutout against Weddington in the first round of the playoffs.

Hunsucker committed to Mars Hill early in her junior year.

“I think what I liked most about it is that it’s in a small town that reminds me a lot of China Grove,” Hunsucker said. “It felt like home. I know it will be cold in the mountains, but cold weather has never fazed me.”

It will be cold. Mars Hill usually starts seasons on Feb. 7.

The 5-foot-10 Hunsucker is expected to focus on pitching in college, but she also has unusual power at the plate, the sort of power that can hit balls through fences as well as over them. She can play first base, and it’s possible the Lions will try to get her bat in the lineup at first base or as the designated player.

“The main goal is pitching, but I’d like to hit some,” Hunsucker said. “I’ve really worked hard at my hitting over the years.”

For now, Miller is just happy to have Hunsucker back in the circle and back on the lineup card.

“A lot of people doubted that she’d be able to come back,” Miller said. “But I knew she had the drive to do it.”

Hunsucker’s injury and the people who helped her rehab from it have convinced that her she wants to have a career in the medical field once softball is over.