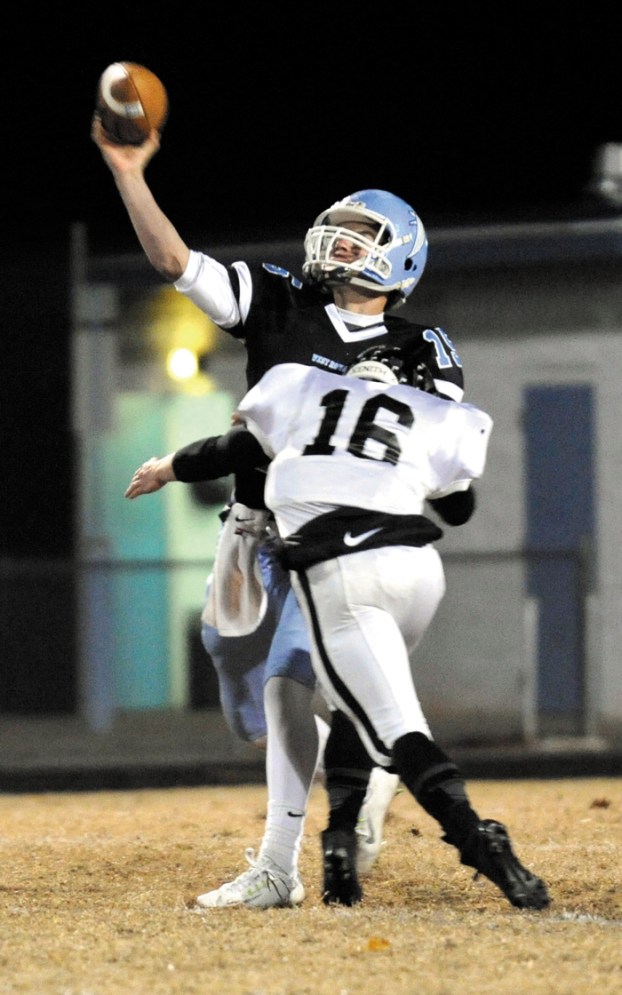 MOUNT ULLA — It was a Friday that will be remembered mostly for North Buncombe’s 55 passing attempts, 32 of which fell incomplete, stopped the clock and extended a night that was almost unbearably cold.

“One of the most bitterly cold nights I can ever remember us playing in, the coldest since Statesville in 2011,” said West Rowan coach Scott Young, who logged career victory No. 172 and playoff victory No. 28.

Young is now 11-0 in first-round games played in Mount Ulla, where Falcon Nation is loud even in frigid conditions.

The key play in a 40-7 victory in the first round of the 3A playoffs  was a West Rowan touchdown on one of those frequent North Bumcombe passing attempts. West Rowan senior DB Kevin Galliard ran about 90 yards to produce a bizarre, 47-yard pick-six. Galliard appeared to step out of bounds on the Falcons’ sideline immediately after making his interception, but when no whistles blew, he kept bouncing around like a pinball, picked up blocks from his teammates, and eventually tumbled into the end zone, exhausted, to break a scoreless tie.

“Yeah, I was tired at the end of that run,” Galliard said with a laugh. “My teammates said I went out of bounds, but the refs didn’t.”

It began as if it might be a difficult night for the eighth-seeded Falcons (8-4), who managed just one first down on their first three offensive possessions.

Galliard’s big play with 4:24 left in the first quarter got the Falcons on track, and before the first quarter was over, the Falcons registered another interception. This time it was sophomore L.J. Robinson. He didn’t have a crazy runback, but he gave the Falcons field position that led to a 35-yard touchdown pass from junior QB Kacey Otto to sophomore wideout Kortez Weeks for a 12-0 lead.

“Tookie (Quameak Lewis) tipped that ball on the interception, and it fell right into my hands,” Robinson said. “It was really cold, but I held onto it.”

“We took away the hitches with the tight coverage,”  Gaillard said. “That was the plan.”

“Definitely the key to the game was defending against their passing game.” Young said. “We were able to disrupt their timing on their short routes, and when they tried to throw down field, we were able to get pressure on the quarterback.”

Galliard had another pick in the second quarter. This one led to the West Rowan TD that made it 19-0. Sophomore Jovon Quarles made a spinning, tackle-breaking 25-yard run down to the 1, and then plunged over for the score.

The Falcons made it 26-0 before halftime when Otto and Weeks connected again. On both of West Rowan’ passing touchdowns, Otto gave Weeks a chance to make a play against man coverage, and on both occasions, the high-leaping Weeks won the battle. Weeks had 98 receiving yards and caught four of Otto’s six completions.

“On both the touchdown passes, I got smacked pretty good by their pass rush,” Otto said. “Those guys played hard, but I was able to put the ball out there, and Kortez made the plays.”

The Falcons tried not to relax at halftime, but North Buncombe opened the second half with a nice drive for a score. Mobile junior QB Chase Parker got the touchdown on the ground, but those were the only points the Falcons allowed.

The Falcons tacked on two fourth-quarter touchdowns, with Harrison Baucom scoring from a yard out, and Quarles scoring on a 15-yard burst.

“What we talked about at halftime was that we were playing pretty good, but we still needed to finish strong,” Quarles said. “That’s what we did.”

While the Falcons didn’t have a banner offensive night, they did enough, and West Rowan’s defense had one of its better performances, holding the ninth-seeded Blackhawks to 209 yards.

Now West Rowan travels to Crest, the No. 1 seed in the bracket.

“We’re excited about the opportunity to play Crest, and I couldn’t be happier with this team,” Young said. “Everyone in uniform for us got a chance to play in a playoff game.”

SPENCER — A thing of beauty it wasn’t for North Rowan. Three turnovers, 11 penalties and an unusually high number... read more