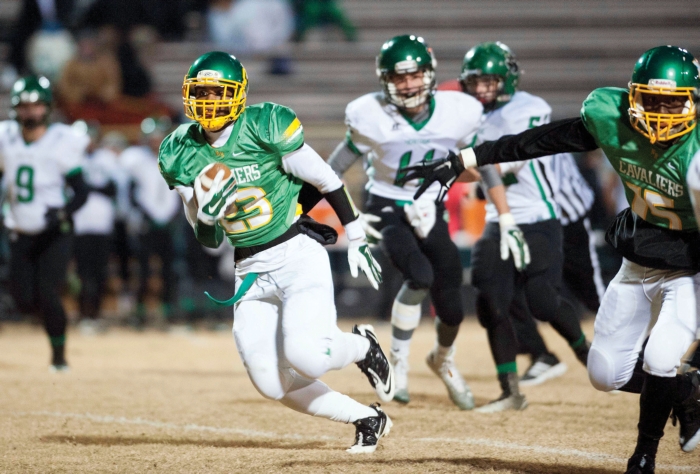 JON C. LAKEY / SALISBURY POST North Rowan's Jalen Sanders (23) breaks away late in the second quarter. No. 5 North Rowan defeated No. 12 Mountain Heritage 20-6 to advance to the second round of the 2A state playoffs.

SPENCER — A thing of beauty it wasn’t for North Rowan.

Three turnovers, 11 penalties and an unusually high number of negative-yardage plays could have doomed the Cavaliers in their 2A state playoff opener Friday. Instead the No. 5 Cavaliers began slaloming through the tricky banks of the postseason with a hard-earned 20-6 victory over visiting No. 12 Mountain Heritage.

“Not one of our best performances,” quarterback Alexis Archie said. “It wasn’t a good first step, but it was a first step. Now we know what we’ve got to fix.”

It was the eighth straight win for North Rowan, which travels to No. 4 Mount Pleasant next week for a second-round matchup.

A night fraught with mistakes yielded a victory North Rowan (10-2) fully expected, thanks largely to Archie (15-for-22, 210 yards, 2 touchdowns) and a combat-ready defense that stiffened when it mattered most. Mountain Heritage (6-6) was better at moving the ball downfield and stopping the run. The Cavs were better at reaching the end zone.

The Cougars reached the North Rowan 5 in the first quarter and the Cavaliers’ 12 in the third, and they came away without scoring both times.

“To win you’ve got to cash in on all of your opportunities,” Mountain Heritage coach Joey Robinson said. “We’re typically a good red-zone team, but we hurt ourselves, and you can’t do that against good teams.”

Robinson said his team “made the game what it had to be — low-scoring,” but they were felled by costly penalties at inopportune moments.

“We didn’t have a lot of penalties. We just had them at the wrong time,” he said.

North Rowan withstood minor injuries to Archie (sore ankle) and running back Jareke Chambers (turf toe), who carried just seven times but gained 76 yards and scored the game-clinching touchdown with 1 minute, 48 seconds to play. It eased the tension after Mountain Heritage navigated 73 yards in 10 plays and scored its lone TD with 2:15 remaining.

“We kind of beat ourselves over the head all night,” said Chambers. “But in the playoffs a win is a win. If you get that ‘W’ and advance, that’s all that matters.”

North Rowan’s first two possessions resulted in punts. Its third produced a 7-0 lead in the second period when Archie rolled out to his left and spiraled a short touchdown pass to wideout Sakil Harrison, who was unguarded on the left side.

“It was a good play-fake,” Archie said. “They overloaded the right side so we faked that way and booted to the left. (Harrison) got in the flats and was wide open.”

“The cornerback was giving me the middle,” Sanders said. “So I took it, and Alexis put the ball right on the money.”

Chambers scored his 20th touchdown of the season in the waning moments. With Archie ailing, he took a wildcat snap on third-and-short and motored 42 yards up the middle.

“He’s the best athlete we’ve got,” said Archie. “We’ve got to give a different look once in a while. He took it to the house and we just watched him go.”

Robinson said Mountain Heritage had only one choice on the play.

“We rushed 11,” he said. “There wasn’t much time so we had to sell the house. He just broke through it.”

The victory was secured when Sanders, playing free safety, scooped up a fumble midway through the fourth quarter and then intercepted a pass in the final minute.