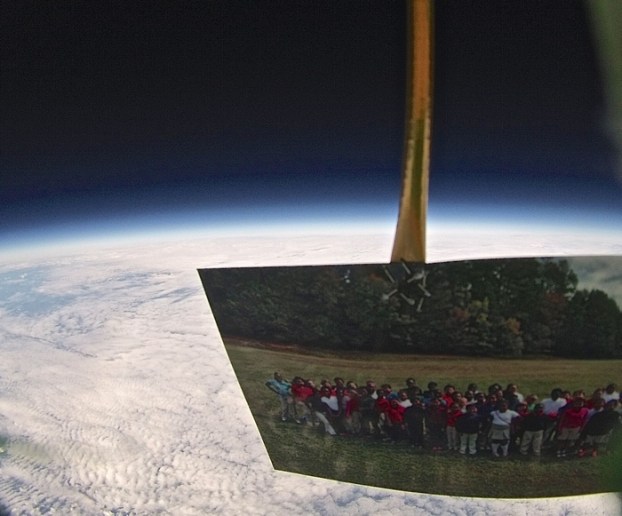 This photo of fifth-graders in Anthony Johnson’s class at Isenberg Elementary was launched into space on a weather balloon, along with other items.

Isenberg Elementary School’s fifth-graders went into space last week – or at least their photo did.

Weather is a central part of North Carolina’s fifth grade science curriculum, so Anthony Johnson launched a weather balloon into space with his students so they could collect and analyze data.

Before Isenberg’s fifth-graders ever touched the weather balloon, they spent four weeks learning about weather, including air pressure, fronts and temperature.

The payload, which weighed 3.3 pounds, included an iPad Mini, two GoPro cameras, a thermometer, a barometer, a GPS messenger, a reflector and a parachute. If the payload had exceeded 5 pounds, Johnson would have had to get permission from the Federal Aviation Administration.

These tools allowed the students to collect temperature and air pressure readings, as well as photo and video.

The payload was attached to a Styrofoam container decorated in Isenberg’s colors – green and gold. Photos of the students were also attached to the payload.

Before the launch, Johnson and his students ensured that the payload was sealed so the equipment wouldn’t freeze and used rope to keep everything intact when it fell back to the earth.

On Oct. 16, Overton’s fifth-graders gathered outside the school. Some had specific jobs, like helping inflate the balloon or checking the wind direction with test balloons. Others documented everything that was going on with iPads.

It took 25 to 30 minutes to completely inflate the balloon and seal the payload.

Although the balloon expanded up to 30 feet, they only filled it until it was six to seven feet in diameter.

“We put helium in there and helium makes it float. We didn’t fill the whole balloon up with helium because the higher the balloon went, the less air pressure, so it expanded,” explained fifth-grader Alania Lopez.

Due to the lack of air pressure, the balloon continued to expand as it rose higher into space. Eventually, it expanded so far that it burst.

“I liked the way we worked up to the balloon launch and how exciting it was,” said Zander Burton, who is also in Johnson’s class. “My favorite part was when we counted down and launched it up and it got smaller and smaller.”

The balloon floated 130,000 feet – nearly 25 miles – into the air and traveled 98 miles before it burst and fell back to earth two hours later. The students recorded temperatures as low as negative 26 degrees.

The iPad mini provided a bird’s eye video of Salisbury during the balloon’s launch. One of the GoPro cameras took two hours of video, and the other took photos every 60 seconds.

“We got great pictures of the clouds,” Johnson said.

“We didn’t get a signal for two hours,” Johnson said.

When they did get a signal, it came from Pittsboro, which is close to Jordan Lake and Chapel Hill.

Although the GPS locator is accurate to 10 feet, it took Johnson and Marvin Moore, the school’s principal, two attempts to find the balloon.

The pair left Isenberg a little early that Thursday and drove to Pittsboro to find the balloon.

They arrived around 4 p.m., and realized that the balloon was in a heavily wooded area.

“We set out way deep in the woods,” Johnson said.

After three hours of searching, the sun had set and the pair couldn’t find the balloon or payload, so they decided to go back that Sunday.

At that point in time, they found the landowners and asked for help finding the balloon.

The four of them went back to where the GPS said the payload was and eventually found the balloon stuck high up in a tree.

“It was just a certain angle,” Johnson said, adding that the land owners actually chopped down the tree for them.

“Neither one of us knows how to chop down a tree,” he laughed.

Since the launch, the students have discussed the data and created videos and presentations using iPads.

Johnson is putting together an iTunes U course on the launch so other teachers can implement the project at their schools.

This isn’t the first time Johnson’s sent a weather balloon into space. Last year he did it twice while working at a Cabarrus County school. He started the project when he received a grant last year and was able to keep the equipment when he switched schools.

Johnson said this weather balloon went the highest of any of them, but not the farthest. One of the balloons last year got caught in a jet stream and landed 278 miles away.