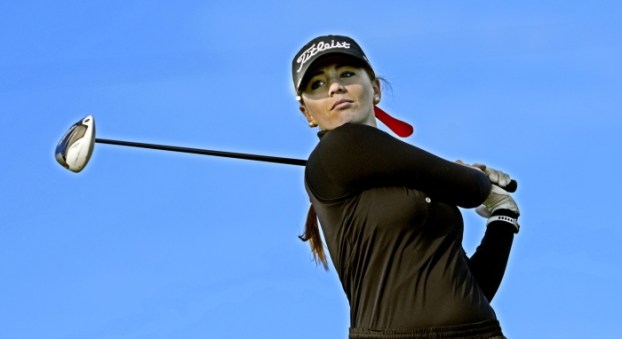 Alexandria Bare from South Rowan tees off in the State Regional Girls 3A Golf tournament. photo by Wayne Hinshaw, for the Salisbury Post

SALISBURY — Corbin Hills was a friendly, smiling golf course when the Rowan County Championships were conducted there in mid-September.

The girls, by rule, couldn’t score worse than a triple bogey and they whacked away from red tees that made par-4s reachable with a driver and a chip shot. Those red tees turned every par-5 into a potential eagle for extra-long drivers such as Carson’s Micah “Boom Boom” Furr.

But October brings championship golf, Corbin Hills becomes more menacing, and the creek that rules holes No. 7 and No. 8 seems to snatch every ball in sight. The girls took their swings from the white tees at Monday’s 3A Central Regional, and the white tees made the par-5s legit and the par-4s a test of nerves.

Not only that, girls couldn’t pick their ball up, even if drops and penalty strokes meant carding a 17 on a hole. That’s why some scorecards sailed past 100 and 110 and 120 and just kept going.

Cardinal Gibbons also handled the course with no sweat — placing five golfers in the 80s.

The top three team scores qualified for the 3A state tournament at Longleaf Golf & Country Club in Southern Pines. Joining Cardinal Gibbons (243) will be Ledford (264) and Rockingham County (266).

South Rowan senior Alexandria Bare was the best of the Rowan County and South Piedmont Conference girls and easily qualified for the state event for the second straight year.

Bare shot 76 in the county championships. Given the change in yardage, she probably played even better on Monday in terms of ball-striking when she finished at 82.

“I had seven good chances for birdies, but I just didn’t make a putt,” Bare said.

Bare hasn’t committed anywhere yet, but she’ll play in college. She lost her sophomore season after tearing an ACL in a skateboard accident, and she’s a very young senior, just turning 17 in September. She has a lot of upside and an even-keel temperament. It’s hard to tell if she birdied or bogeyed the previous hole.

Bare started on No. 10 and made the turn at 4-over. Then she ran into serious trouble on holes No. 1 and No. 2, taking back-to-back double bogeys to go 8-over with seven holes left.

“I drove behind a tree,” she said. “Those two holes got me a little discouraged.”

She had a chance to get really discouraged on No. 6, a par-5 that was playing 442 yards from the white tees (it was 361 from the red). Bare whacked a soaring, left-to-right drive, then crushed a 3-wood. She was on the green in three — with a good chance at birdie — but she three-putted for a deflating bogey.

That’s where the steam could’ve gone out of her. Instead Bare munched a peanut butter sandwich and played her best golf down the stretch. She finished par-par-par, nailing shot after shot on the tough creek holes that were swallowing up her competition.

“I just needed a little protein,” she said with a laugh.

“It’s a long season and you’ll have ups and downs, but she knows the game and she loves the game,” he said. “She hit great drives and approach shots today. Her touch and her putter weren’t quite where they are some days. If they had been, she would’ve shot a great score.”

Besides the three teams that qualified for the state tournament, the top 17 individuals not on those three teams advanced. Two girls shot 93 and went to playoff for the final spot. Furr was thrilled her 91 made her a qualifier.

“I was topping a lot of stuff today, but fortunately I was chipping better than I usually do,” Furr said. “The longer tees didn’t bother me, but the wind did. On the ninth hole, I thought I hit a good  shot, but the wind pushed it way right.”

Rowan’s 3A golfers started the season in severe heat — 98 degrees at Rocky River — and the season ended for all but Furr and Bare in Monday’s polite breezes and mild temperatures.

Salisbury girls golf coach Dale Snyder was just glad to get back from Mount Airy in one piece — and... read more