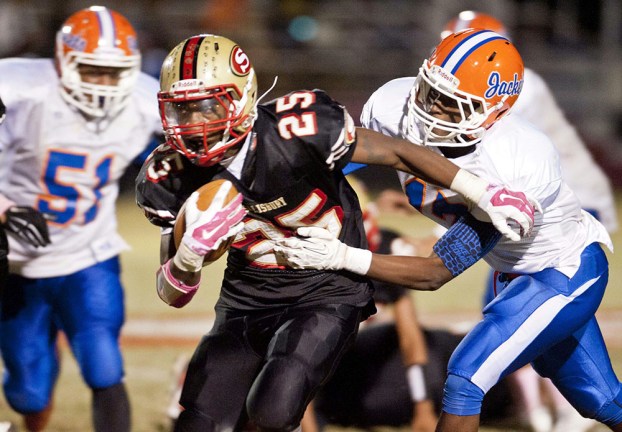 SALISBURY — Halfback Antwond Glenn frequently encountered potential Lexington tacklers at the line of scrimmage, but he powered through them like he was a halftime homecoming float.

Glenn’s 150 pounds includes a heart that weighs about 149. He carried 22 times for 203 yards on Friday at Ludwig Stadium, and the Hornets rode his tenacious career game to a 30-20 CCC win against Lexington.

“Sometimes our offensive line was able to get our backs into open space,” Salisbury quarterback Riley Myers said. “But even when Antwond didn’t have space, he made his own space.”

Lexington was advertised as one of the best 0-7 teams you’ll ever see. The Yellow Jackets lived up to that billing, but now they’re 0-8 and 0-2 in the CCC.

“Our coaches kept telling us all week Lexington was talented, way better than their record,” Glenn said. “They said it would be a fight, They were right.”

Throwing most of the punches for Lexington was elusive quarterback Devin Cross, who produced 228 aerial  yards and rushed for 95 more. Cross accounted for all three Lexington TDs with passes.

“Cross is such a good athlete that he’s going to break the pocket and make plays at times,” Salisbury coach Ryan Crowder said. “We told our guys that we weren’t going to stop him, but we had to limit his big plays. He can get gone in a big hurry, but we had to bend and not break.”

Salisbury’s defense answered the challenge. Lexington scored twice in the first seven minutes, but it didn’t scratch again until only 1:30 remained. That means the Hornets, who got huge efforts from Dante Gaston, Jordan Oglesby and Desmond Millsaps pitched a shutout for nearly 40 minutes.

“It was just a lot of guys doing their jobs,” Millsaps said. “We didn’t adjust a lot of things at halftime, but we raised our intensity a lot.”

Millsaps made a huge contribution on the final play of the first half when he made the stop on Cross when it looked like the QB might weave his way to the end zone.

Willie Clark pounded for 74 rushing yards for Salisbury, and while he didn’t have big stats, Myers had a super game, making good reads on the option, scoring on a sneak for a 19-14 halftime lead and throwing two TD passes on third-and-long situations.

After a Cross-to-Jerarmony Charles TD pass gave the Yellow Jackets a 14-7 lead midway through the first quarter, Myers hit Will Steinman for an 18-yard TD on third-and-11. Steinman made it back from a shoulder injury that had kept him out since Week 3 and made an immediate impact.

Ball control was the story for the Hornets in the second half. Glenn carried 16 times after the break, while Lexington ran only 15 offensive plays the whole second half.

Salisbury started the second half with a methodical march that chewed up nine minutes. The Hornets were stopped on downs at the Lexington 15 and failed to get points, but the keep-it-away-from-Cross gameplan was working.

Salisbury maintained its precarious 19-14 lead for an eternity but finally tacked on when Myers spotted tight end Damann Millsaps open on a pivotal third-and-9 play at the Lexington 18.

“I was on the same side of the field as Steinman, and I think they were keying on him,” Millsaps said. “I realized I was open. Then I saw the ball in the air and went up for it.”

Glenn added a two-point conversion run for a 27-14 lead.

Salisbury passed on the opportunity to try two field goals earlier, but Steven Mazur’s field goal with 2:18 left made it 30-14.

Cross’ scoring pass to Ty Hill with 1:30 remaining pulled Lexington within 30-20, but when Cross threw low on a two-point conversion try, Salisbury’s 12th straight victory against Lexington was a sure thing.

After that, all the Hornets had to do was fall on an onside kick and line up in victory formation twice, as the homecoming crowd celebrated.

“It was a tough test, but it was a test that we passed,” Desmond Millsaps said.

By Brian Pitts The Davie County Enterprise-Record In what has become a theme for Davie County in the Central Piedmont... read more