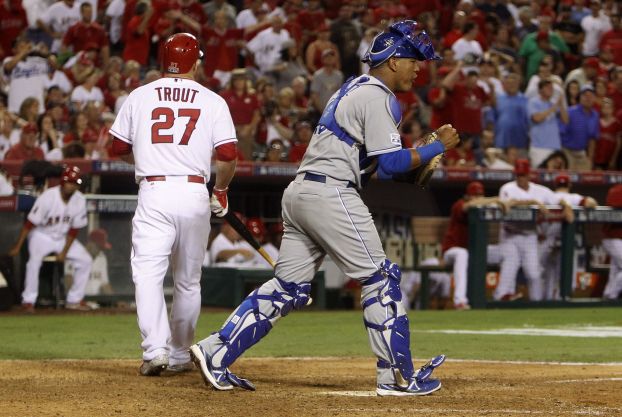 ANAHEIM, Calif. (AP) — With three extra-inning wins in four remarkable days, the long-downtrodden Kansas City Royals have climbed from the depths of a 29-year playoff absence to the brink of the AL Championship Series.
Eric Hosmer hit a two-run homer in the 11th inning, and the Royals took a 2-0 lead in the AL Division Series with a 4-1 victory over the Los Angeles Angels on Friday night.
Alex Gordon had an early run-scoring single and Salvador Perez added an RBI infield single in the 11th for the Royals, who became the first team in major league history to win three straight extra-inning playoff games.
“We’re going to try to figure out nine next time,” said Hosmer, handed the souvenir home run ball during a postgame television interview. “I know these games have been exciting, they’ve been taking a long time, but we’ll take a win any way we can get it.”
In its first postseason appearance since 1985, Kansas City is on a playoff roll — and the majors’ best regular-season team has not been able to stop it. Hosmer had three hits and scored two runs as the Royals moved within one win of the AL Championship Series.
Game 3 in the best-of-five series is Sunday in Kansas City, where Angels left-hander C.J. Wilson faces James Shields.
Strong defense again was a huge factor for the Royals.
After C.J. Cron’s leadoff double against Wade Davis in the eighth, Angels pinch-runner Collin Cowgill decided to test the arm of center fielder Jarrod Dyson, who had just entered the game. Dyson threw out Cowgill at third after catching Chris Iannetta’s fly to left-center.
“That’s huge. That changes momentum, that changes everything in a game right there,” Hosmer said. “That’s a big-time play.”
Two innings later, shortstop Alcides Escobar turned a tough double play after stretching high to glove an off-target throw.
After 10 innings of intense, pitching-dominated baseball, the Royals broke out. Lorenzo Cain beat out a one-out infield single off losing pitcher Kevin Jepsen, and Hosmer smacked a no-doubt homer to right field, setting off a celebration for several dozen blue-clad fans in a sea of red at the Big A.
Albert Pujols had a tying RBI single in the sixth for the Angels, but the majors’ most productive offense has been mostly helpless against the Royals. Los Angeles, which led the big leagues with 98 wins, has just 10 hits and three runs in 22 innings.
“There are some guys that right now aren’t attacking the ball where they can for various reasons. There is not one cure-all that’s going to get everybody swinging the bat,” manager Mike Scioscia said. “We haven’t done a lot of the things we’ve done during the season, and we put a lot of pressure on our pitching staff.”
Mike Trout got a chance to help in the 11th after second baseman Omar Infante made a throwing error on Kole Calhoun’s two-out grounder. But the AL MVP favorite struck out against Greg Holland, finishing his second straight 0-for-4 night in his first playoff series.
Only two teams since 1995 have rallied to win a division series after losing the first two games at home.
Kansas City’s cardiac kids have put an unlikely charge into October. The Royals are the first team to play in three consecutive extra-inning playoff games since the 1980 NLCS between Houston and Philadelphia, which had four straight.
They followed up their 12-inning wild-card victory over Oakland with a series-opening win on Mike Moustakas’ 11th-inning homer, and Hosmer kept it going with his decisive homer one night later.
Brandon Finnegan pitched a hitless 10th for the Royals, and the 21-year-old rookie earned the win. Greg Holland worked the 11th for his second save of the series.
In a matchup of impressive rookie starters, Yordano Ventura pitched five-hit ball for the Royals, and Matt Shoemaker threw six innings of five-hit ball for Los Angeles.
Ventura’s fastball was clocked at 102 mph in the second inning, and he was still hitting triple digits in the seventh. He escaped jams twice in the late innings, stranding three runners.
Shoemaker also was sharp in his playoff debut after a breakthrough 16-win regular season. The Angels’ 28-year-old rookie had six strikeouts while pitching for the first time since straining an oblique muscle on Sept. 15.
The Royals took an early lead for the second straight night when Hosmer singled, advanced on Calhoun’s error in right field and scored on Gordon’s single in the second inning.
After Ventura retired 10 straight in the early innings, the Angels evened it in the sixth with a two-out rally. After Calhoun singled and Trout walked, Pujols drove a 100 mph fastball to right for the first hit of his first postseason with Los Angeles.
Perez was hit in the head by Josh Hamilton’s backswing in the fifth inning. Perez, the hero of Kansas City’s wild-card playoff victory over Oakland, stayed in the game after a long moment on the ground.
TRAINER’S ROOM
Royals: RHP Kelvin Herrera has a flexor strain in his right forearm after throwing just five pitches in Game 1. The reliever will be re-evaluated when the teams get to Kansas City.
Angels: Hamilton went 0 for 4 with a double-play grounder to end the 10th, dropping to 0 for 9 in his first playoff series with Los Angeles. The slugger played just once in the final 22 games of the regular season due to upper-body injuries.
UP NEXT
Shields started the Royals’ wild-card playoff win Tuesday, so he’ll be on normal rest. Los Angeles is hoping for solid work from the up-and-down Wilson.

Common Sense: The game within the game