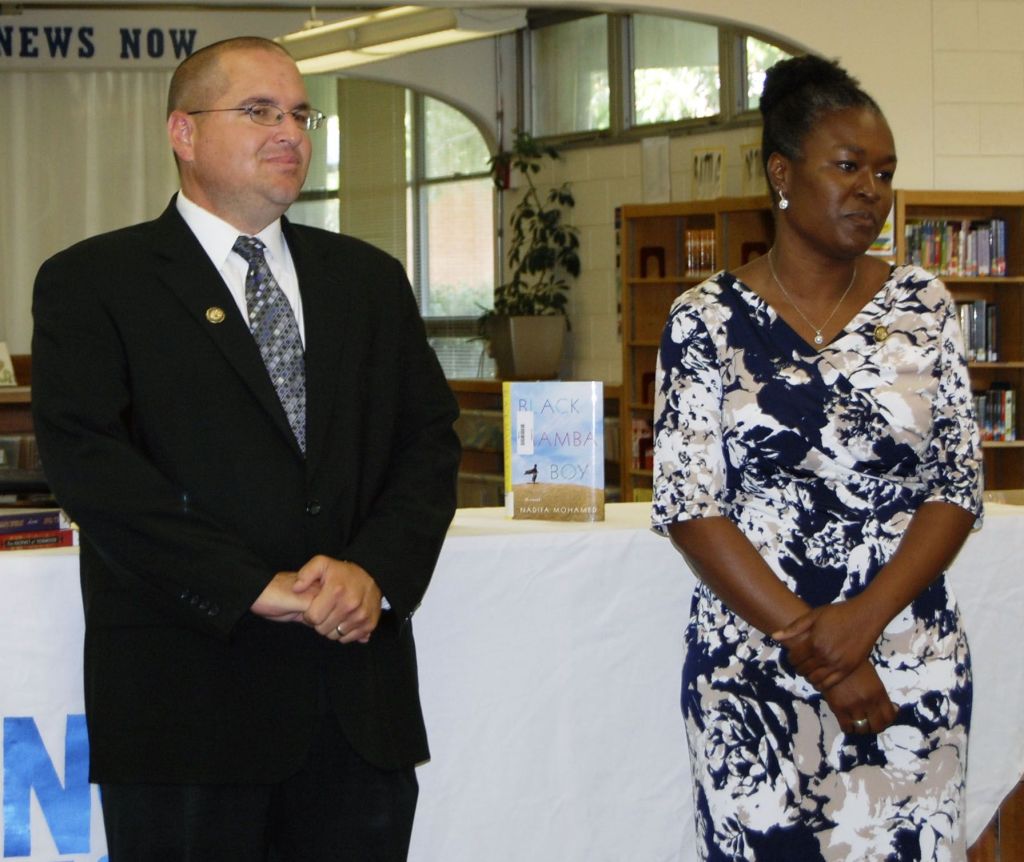 “They seem like they really work together,” said Mary Heather Steinman.

“It was a good first impression,” added her husband, Todd Steinman.

The couple has had children at Knox for five years.

According to Dixon, the co-principal model is rare – especially in the southeast. The model requires a tremendous amount of personal and professional trust between the principals.

Although she and Waiksnis haven’t been physically working together in the same building, the pair has been collaborating for five years, Dixon said.

The pair doesn’t plan to simply split the principal’s duties in half, Waiksnis said. “We plan to be as collaborative as possible.”

Superintendent Dr. Lynn Moody said Dixon and Waiksnis are “two of the best and brightest” from her former district in Rock Hill, South Carolina, and they “think outside the box.”

Both have been principals since 2008 – Dixon since January and Waksnis since June.

“Every year they’ve gotten growth over the year before,” Moody said.

“I don’t want ninth grade to be a let down when they get through Knox,” he said.

Moody said Dixon and Waiksnis share a “great sense of humor,” but that the pair is “about as opposite as night and day.”

Dixon grew Mount Gallant Elementary School through learning communities, while Waiksnis improved Sullivan Middle School by focusing on literacy. Dixon is strategic and detail-oriented; Waiksnis works at a faster pace and thinks in terms of the big picture. Dixon grew up in poverty. Waiksnis comes from a wealthy family.

Their differences will provide them with the ability to see things from different perspectives and better help the wide variety of students, parents and staff Knox serves, Moody said.

“Knox is such a wonderful school,” she said.

The Steinmans hope the teachers and staff receive support throughout the transition.

The assistant principals “keep things flowing,” she said, adding that she hopes their positions are protected during the transition.

Moody, however, said one assistant principal position will be eliminated in order to make the co-principal model work.

According to Moody, she discussed the transition and changes with Knox’s assistant principals earlier this week, as well as each of their professional growth and goals.

Leaving Knox will be “by their request,” she said.

In an attempt to help the assistant principal that leaves grow professionally, the district will honor where the individual wants to work.

Dixon and Waiksnis will both earn an annual salary of $70,000.

Moody said that amount is the standard amount for principals in the state of North Carolina.

In the Rowan-Salisbury School System, assistant principals make anything between $41,396 and $75,224 each year, based on experience.

Catawba and Livingstone colleges, Novant Health, the City of Salisbury and The Blanche and Julian Robertson Foundation have been influential as Moody and other district leaders have began planning ways to change Knox Middle.

“We haven’t put the entire plan together,” Moody said, but each partner will play an integral role in the school’s transformation.

“We are just so delighted that we got what I call the ‘dynamic duo,’” said Brien Lewis, president of Catawba College.

The colleges have discussed how they can collaborate with Dixon and Waiksnis. Although no details have been set in stone, research, continuing education classes, internships and teaching opportunities were mentioned.

Doug Paris, Salisbury city manager, said the city’s future is “only as bright as our schools are strong.”

A reception for students and parents to meet Dixon and Waiksnis will be scheduled soon.