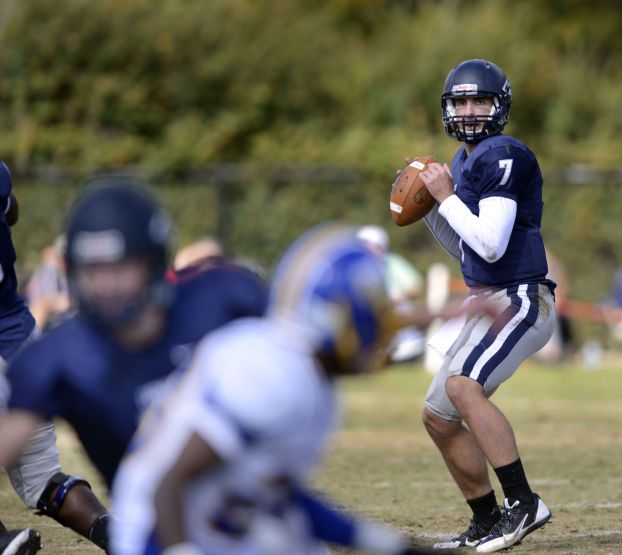 SALISBURY — Catawba football coach Curtis Walker got nothing but good vibes from transfer quarterback Danny O’Brien from the very first senior meeting.
Early on, none of his teammates knew what to expect from O’Brien, who had been part of big-time programs at Maryland and Wisconsin before returning close to his Forsyth County roots at Catawba. If Indians were worried that O’Brien’s head would be too swelled to fit into a D-II locker room, well, his actions reassured everyone that he was as down-to-earth as it got.
“Everyone had something to say in that first meeting except Danny,” Walker remembers. “Danny didn’t say a word. He just sat there listening because he really wanted to fit it in and just wanted to be part of our team. But by the end of the season, everyone was listening to Danny. He was smart, he was a good leader and he was a huge part in of us having some success in a building year.”
In his one year at Catawba, O’Brien showed size, mobility and a fine arm. His 68-percent completion rate and 248 completions set school records. That was no surprise.
But he also showed the intangibles worthy of a shot at making an NFL roster.
O’Brien signed a free-agent contract with the Atlanta Falcons shortly after the NFL Draft concluded.
He’s one of two Indians who will get a shot. Safety/kick returner L.J. McCray, a genuine beast at Catawba for all of his healthy seasons, was signed as an undrafted free agent by the San Francisco 49ers, who have a strong Catawba connection through defensive line coach Jim Tomsula.
O’Brien has NFL-ish measurables. He wowed scouts when he worked out at Wake Forest’s bad-weather pro day. At 6-foot-3, 220 pounds, he ran 4.7 in the 40 and he his vertical jump tested like a wideout.
He threw for 2.490 yards, with 15 TDs and only six picks, in his year at Catawba.
McCray shocked some scouts with his Pro Day workout. At 6-feet, 210 pounds, he ran a 4.46 40 and he vertical-jumped 41 inches.
“L.J. has good size and does a lot of powerful, physical things,” Walker said. “That’s important in the NFL.”
McCray, All-SAC first team as both a safety and a return man as a senior last fall, doubles his chances of making the 49ers’ roster or practice squad by being a special-teams ace.
He had some electrifying moments for the Indians, including a game against Tusculum in 2010 in which he ran back kickoffs for 94-yard and 99-yard touchdowns. He set a D-II record in that game with 304 return yards. McCray broke the Catawba record for kickoff returns yards with a career total of 2,212.
McCray started as a freshman
and starred as a sophomore before he suffered a rib injury early in the 2011 season. He was granted a redshirt year and came back to shine in 2012 and 2013.
That year away from the game added maturity to his deameanor and enhanced his hunger to be a great football player, and he had tremendous seasons for the Indians. He was the unquestioned leader of a very young Catawba team in 2013.
McCray is a product of Harding High in Charlotte. He got looks from teams as high up the ladder as Clemson coming out of high school, but Catawba was fortunate that he landed in Salisbury.
“I only got to coach him one year, but he was a force for four years at Catawba,” Walker said. “His special-teams ability gives him a real chance in the NFL. Every scout that comes in here, the first question they ask is about a player’s character, but that second question always is, “Does he play special teams?’”
McCray topped 1,000 return yards as a junior. As a senior, he had 78 tackles, eight breakups and two sacks.
He fits the mold of the modern NFL safety in that he’s fast enough to cover receivers, yet tough enough to take on running backs. In other words, he can play in the box or outside it.
McCray has a well-earned reputation as a stand-up guy and a 110-percenter, while O’Brien has always drawn raves for his work ethic and intelligence. O’Brien has been asked to learn a lot of different systems during his college days, but he ran Catawba’s offense like he’d been doing it all his life.
“We’re ecstatic about both of these guys getting an opportunity,” Walker said. “We only had Danny for one year, but we’re proud to claim him. Both of these guys are positive role models and great ambassadors for our school, and we wish them success.”
McCray and O’Brien join defensive back Jumal Rolle as Catawba players on NFL rosters. Rolle ended last year with the Green Bay Packers.