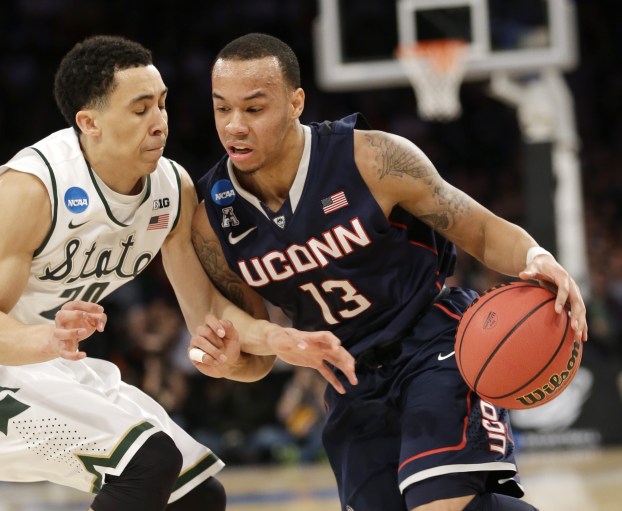 NEW YORK (AP) — Shabazz Napier owed UConn.
He could have transferred when academic sanctions barred the Huskies from the NCAA tournament his junior season. But the guard wanted to pay back the school for the joy of a national title his freshman year, for his struggles as a sophomore.
Napier sure did that Sunday, carrying UConn back to the Final Four in front of thousands of roaring Huskies fans at Madison Square Garden. He scored 17 of his 25 points in the second half in a 60-54 upset of fourth-seeded Michigan State.
The East Regional’s most outstanding player hit three huge free throws with 30.6 seconds left, making clutch shot after clutch shot just as Kemba Walker did when Napier was a freshman. The Huskies (30-8) rallied from a nine-point second-half deficit to become the first No. 7 seed to reach the Final Four since the tournament expanded to 64 teams in 1985.
“His will to win — you could just see it,” said Gary Harris, who led Michigan State with 22 points. “He wasn’t going to let his team lose.”
The Spartans’ seniors become the first four-year players recruited by Tom Izzo to fail to make a Final Four.
“As the game got closer and closer to ending, it was on my mind a lot, every huddle,” said big man Adreian Payne, who had 13 points and nine rebounds but was repeatedly pushed to the perimeter by UConn’s defenders.
The undersized Huskies matched Michigan State’s physical play box-out for box-out, holding the Spartans (29-9) to just six offensive rebounds and six points in the paint.
“We’re physical, too,” said second-year coach Kevin Ollie, who is now 4-0 in the NCAA tournament after replacing mentor Jim Calhoun. “Don’t get it mixed up. We are predators out there.”
UConn dared Michigan State to shoot 3-pointers, and the Spartans nearly made enough, going 11 for 29 from behind the arc. Harris was 4 for 9 on 3s, but his teammates were a combined 10 for 32 from the floor.
Trailing 51-49 with more than two minutes left, Michigan State had a chance to tie or take the lead. Payne threw the ball away, and Napier drilled a jumper on the other end.
After Payne’s free throws pulled the Spartans back within two, Keith Appling was whistled for a foul — the fifth on Michigan State’s other senior starter — for contact with Napier on a 3-point attempt. Napier extended the lead to 56-51, and after Travis Trice missed a 3, Phillip Nolan slipped free for a dunk that clinched the victory.
“We got what we deserved today,” Izzo said. “I tried to tell these guys that, when you get to the tournament, you got to bring it every second. And today Connecticut did, and we just kind of weren’t as good as we have been.”
Ryan Boatright made four steals as Michigan State committed 16 turnovers. Some were caused by UConn’s quickness, others by poor decisions by the Spartans. Izzo thought his team, a popular pick to win it all after finally getting healthy in March, looked tired.
DeAndre Daniels shut down Branden Dawson, who scored 24 points in Michigan State’s Sweet 16 win over top-seeded Virginia. Dawson attempted just three field goals, making one, to finish with five points.
The 6-foot-10, 245-pound Payne hit two long jumpers to put Michigan State up 32-23 less than four minutes into the second half. But Napier started driving, getting the bigger Appling in foul trouble and UConn back in the game.
“When Coach looks at me a certain way, I just know I got to be more aggressive,” said Napier, who passed Ray Allen for fourth on the Huskies’ all-time scoring list with 1,925 points.
After hitting four straight free throws to tie the score at 32 with 12:38 left, Napier was struck in the face by Harris — the UConn guard was called for a foul on the play — and left the court with his nose gushing blood. He was back less than a minute later when Daniels completed a three-point play to give the Huskies the lead for good.
Boatright’s contested 3-pointer with the shot clock winding down put UConn up 49-39 with less than seven minutes left.
The Huskies won their third national title in 2011, but they were ineligible for last year’s tournament because of previous low scores on the NCAA’s academic progress measure.
They face Florida in the national semifinals Saturday, and they’ll be confident they can beat the No. 1 overall seed. The Gators have won 30 straight, but their last loss was to UConn, 65-64 on Dec. 2.
After the Huskies were routed 81-48 by Louisville in the regular-season finale, Ollie showed his players video of that victory to remind them of what happens when they play frenetic defense.
“We’re going to be well prepared, because I know about these guys’ heart,” Ollie said. “That’s what got us through: It was a heart of a champion, heart of a lion.”