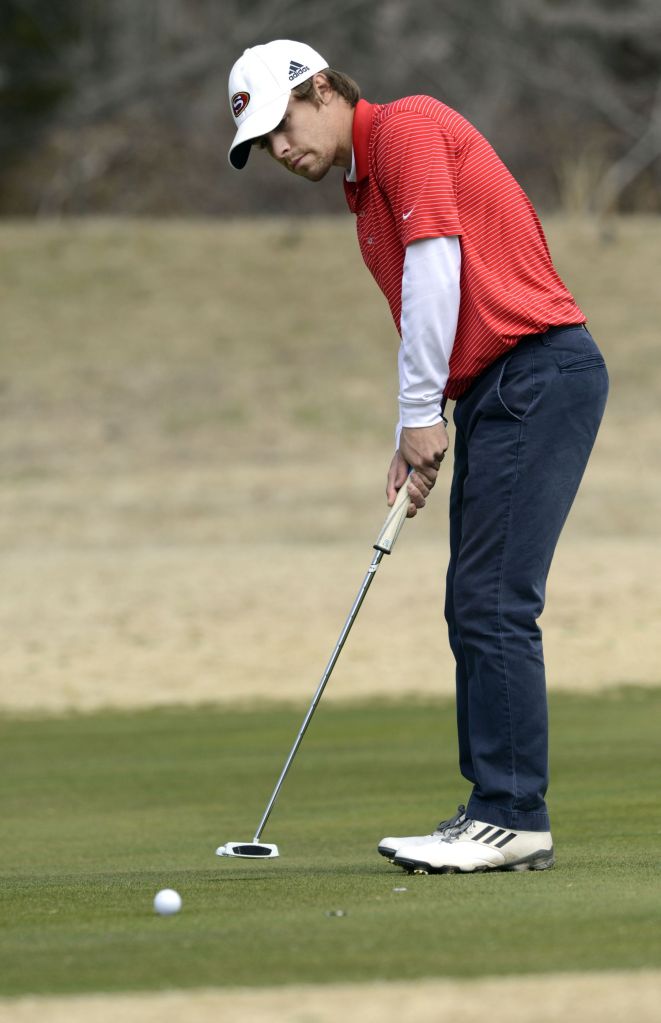 SALISBURY — It’s been a pretty good stretch for Salisbury’s Eric Edwards.
The senior committed to George Mason’s program last weekend and helped restore SHS’ dominance on the Rowan circuit by winning the county title at Corbin Hills Golf Club. Edwards, who’s been a part of a pair of state title teams with the Hornets, shot a 1-under 71 to nip South Rowan’s Davis Richards by a shot.
“Eric’s a good friend of mine and I’m proud of him getting the win,” Richards said.
There wasn’t much tension since everything seems to be going right for Edwards, who won his second county title after capturing it his freshman year in 2011. He started on hole seven and gained a three-shot lead in the early going. Richards closed in, but any nail-biting was nullified by good friends, good weather and good golf.
“We felt the pressure coming down the stretch but it’s good fun,” Edwards said. “We’ve been really good friends and played since we were young. It’s always a good time.”
After being unseated by upstart South last year, SHS won the county match for the fifth time in six years. Edwards’ day was the anchor, but Christopher Queen (79) and Abraham Post (79) posted solid scores while Gabe Steinman offered an 81 as SHS finished with a 310 to edge South by five shots.
“They’ve stuck with it and I’ve proud of the work they’ve put in,” Edwards said. “They brought their best in one of the biggest matches of the year.”
Edwards brought one of his most consistent matches of the year, only bogeying one hole. He played well in the last few matches, earning medalist during last Thursday’s nonconference tilt.
“It’s a bunch of pars,” Edwards said. “I knew I couldn’t be too aggressive or too conservative. I just had to play my game.”
Edwards gained a one-shot lead after getting a birdie on No. 11. Edwards was one up with three holes to go and Richards tied the last three holes
“I hit a pretty good drive, a good sand wedge about five feet away and then made the putt,” Edwards said. “That made it a little easier the rest of the way.”
A birdie on 18 gave Edwards distance so the bogey on 16 didn’t hurt as much.
Richards, who’s committed to N.C. State as a junior, said a double bogey on 14 was a tough blow to his chances.
“It wasn’t the best of days, but it was fun,” Richards said. “It just wasn’t my day but we still had a good time. I got off to a slow start and it took me a while to get going. Once I got going, I played pretty well but it was just one of those days. ”
Richards went aggressive on the final hole to try and gain a birdie to force a playoff. Both Edwards and Richards got par on hole 6, a par 5.
“I played aggressive the last six holes just trying to make something happen. I hit a good drive on six and then just hit a bad iron shot.”
West Rowan’s Jake Kennedy, as always, was in the mix and was as big a hit in the clubhouse afterwords. The Gardner-Webb commit had a 76 for the third-best score.
“I’ve come close all four years,” Kennedy said. “There’s always one hole that defines it and today it was 18. I enjoy competing with the county boys. They’re rivals, but at the end of the day, we’re all friends.”
Defending champion Logan Shuping shot 79 while teammate Nick Lyerly led East Rowan with a 77.
Tyler Mulkey (80) had North Rowan’s top score.
Making the All-County team were Edwards, Richards, Kennedy, Evan Neas, Lyerly, Shuping, Queen, Post, Mulkey, Bobby Bauer and Steinman