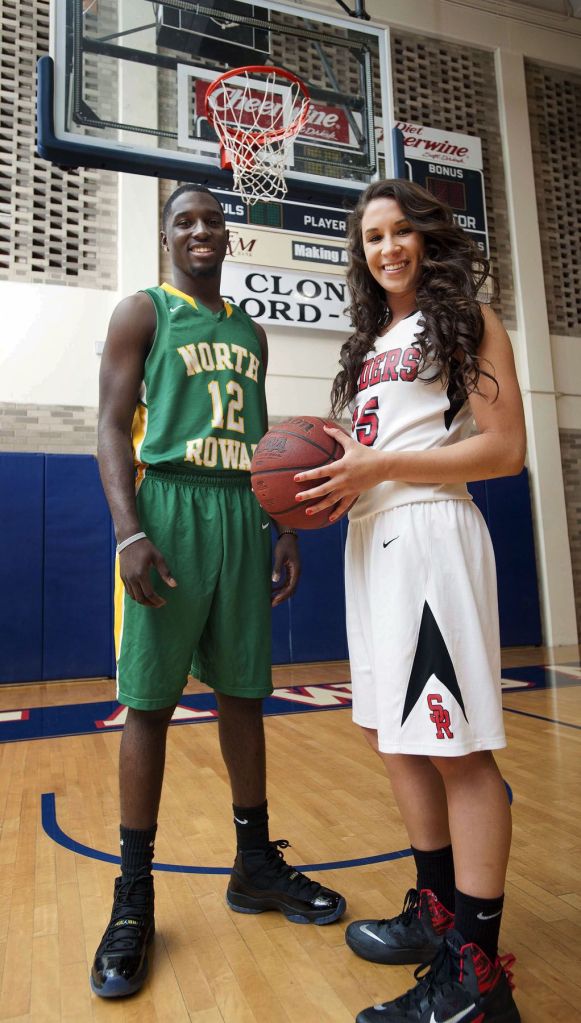 SALISBURY — We swear it didn’t factor in the decision, but Michael Connor probably has the best relationship with the Post in the county
From the first day of practice, Connor kept the Post in mind, having ‘RIP Gallagher’ shaved into his head as a tribute to the late sports editor who passed away suddenly last August. He tried to be thoughtful and considerate of others who had supported him.
In some ways, Connor’s senior year ended just as his freshman year did, at Reynolds Coliseum in the state championship game. In other ways, things were different. North didn’t win this year’s title as it did in 2011, but Connor’s game evolved naturally as most prep players do over a four-year span.
He’s measured progress educationally, and he’ll be the first in his family to graduate high school. He shaped lives, other than his own, through basketball.
“Mike was my very first friend when I came down to North Carolina,” teammate Michael Bowman said. “Ever since I can remember at North Rowan Middle, me and him have been great friends.”
Connor, a constant during Andrew Mitchell’s tenure at North, pitched a team-leading 16.7 points a game this year. His 1000th point came on senior night and his last game at North’s gym featured a 17-point fourth quarter in the playoff win against East Lincoln. A win against Kinston two weeks ago would have completed the storybook senior campaign, but the Cavs don’t get there without Connor.
Connor came alive in the postseason, averaging 17 points a game, including 25 in the East Lincoln win. During the Shelby game, Connor was assigned to defend Shelby’s Gabe DeVoe, a Clemson signee.
“[DeVoe] scored 39 points but he had to take about 30 shots to get there,” North coach Andrew Mitchell said. “Mike defended him. His defense has come up big. He’s a guy you want on your team.”
With Oshon West and Malik Ford departed, the scoring had to come from the Cavs’ big three in Connor, Bowman and Jalen Sanders. Connor’s totals increased each season, from 6.7 points per game as a freshman to 9.3 as a sophomore to 9.5 his junior year. It was like North’s season, as the Cavs weren’t noticed in any of the state media polls, but rolled through the gauntlet of East Lincoln-Shelby-East Rutherford-Smoky Mountain on the way to the title game.
“I became smarter on the court,” Connor said. “When I became a senior, I had to be a leader.”
He was as prolific a scorer as teammates Michael Bowman and Jalen Sanders, but the defensive spectrum really separated the 6-foot-2 decorated athlete. With his quickness and length, it probably seems like Connor has six arms at times.
“Mike’s been a dominant player on the offensive and defensive end,” Bowman said. “You can’t get by him because he’s so quick. He can stay in front of anybody.”
North did win the Moir Christmas Classic, the Central Carolina Conference Tournament and 20 games for the fifth straight season. It’s hard to leave that behind, but local fans will remember him as a cornerstone of a golden era for North basketball. Division II Mount Olive is interested in Connor along with some junior colleges and he’ll surely land somewhere next year.
“It was a great season we had,” Connor said. “The things we overcame, people thought we weren’t going to win certain games we did. I’m glad that I was a part of it.”