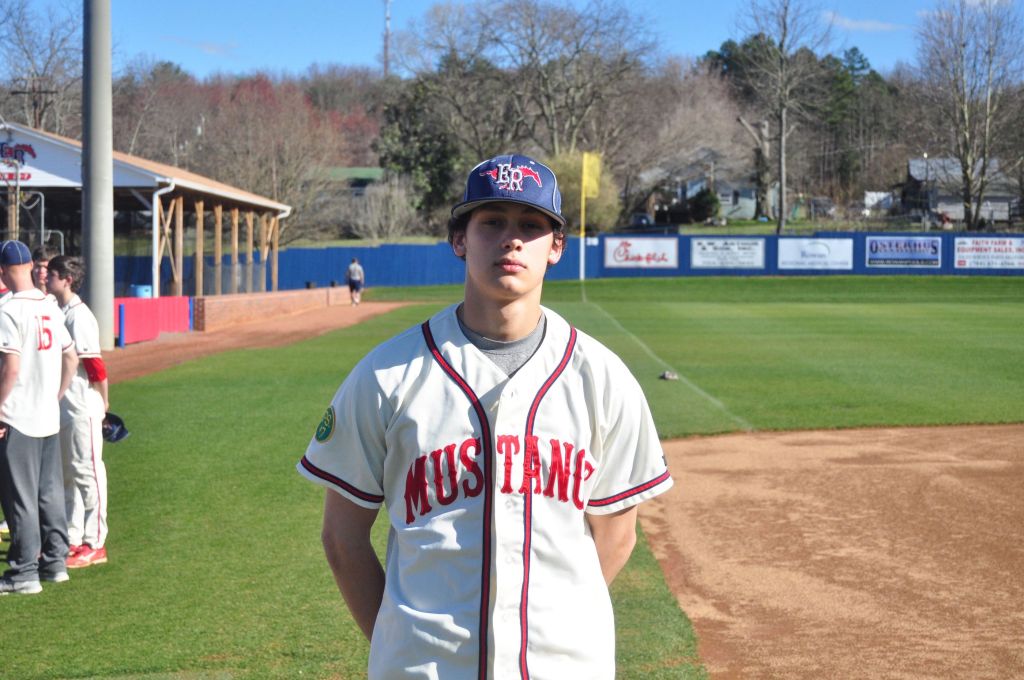 GRANITE QUARRY — East Rowan’s Connor Johnson said he wasn’t at his best Friday night. Try telling that to visiting Hickory Ridge.
The senior lefthander bulldogged his way through a nagging injury and pitched the Mustangs into a tie for first place in the SPC.
“I wasn’t 100 percent,” Johnson said after East gained a 6-1 victory. “But it still felt good to just go out and throw the ball.”
Connor — who jammed two fingers on his pitching hand while sliding headfirst into second base a week earlier — was nonetheless master of his domain. He blended an upper-crust fastball with an adequate curve as the Mustangs (6-4, 6-2) completed a two-game sweep.
“He located the ball well — but everyone on their staff does,” losing coach Brenden Knapp said after HR (3-7, 3-5) managed only a pair of third-inning singles. “They all throw in the mid-80’s and know how to get you out.”
Johnson worked six innings, induced nine groundouts and improved to 4-0.
“He pitched a pretty good game,” said East coach Brian Hightower. “Even though he’s been dealing with swelling and stuff all week. I was still impressed with what he did tonight.”
East collected six hits against Hickory Ridge freshman John-Riley Hathcock, a righthander who pitched as though the plate was 59 feet from the rubber. He unleashed seven wild pitches and was victimized by two infield errors that allowed the Mustangs to plate five unearned runs.
“That’s been our story all year,” said Knapp. “We’re a young team. Our starting pitcher was nervous and couldn’t put the ball where he wanted to.”
East took a 1-0 lead in the last of the first inning. Leadoff batter Michael Caldwell reached on an error, then advanced to second and third when Hathcock threw successive wild pitches.
“We needed to make something happen right away,” said Caldwell, who reached base three times and scored East’s first two runs. “That was our mentality. We won big (on Thursday) and we wanted to keep that momentum going.”
They succeeded when Ty Beck followed with a sizzling sacrifice fly to center field. HR tied the score in the top of third and could have taken the lead if not for a well-executed defensive play. Johnson yielded a bunt single by No. 9 hitter Dan Gronchal, then walked a man and surrendered Matt Seele’s RBI-single to left.
“When (Johnson) left the ball high, that’s when he got hurt,” said East catcher Dustin Ritchie. “They tell you not to let the pain show — and he didn’t show it too much.”
Johnson escaped further damage after hitting HR’s Will Simoneaux to load the bases with one out. Third-baseman Mason Doby made a clean stop on a grounder by cleanup hitter Andrew Friends and initiated an inning-ending 5-2-3 double play.
“Any time you go out there you gotta figure you’re gonna be in at least one jam,” Hightower said. “And he got out of one with the ground ball to to Doby. There was good footwork all around on that play.”
East reclaimed the lead in its half of the third when it batted around and scored five times. Caldwell triggered the rally when he drilled a one-out double off the K.W. Arthur & Son sign hanging on the left-field wall.
“I had two strikes on me,” he said, “and was trying real hard to put the ball in play. I was looking for something offspeed and got a changeup inside.”
It was clearly a mistake pitch that Caldwell tatooed. Moments later he scored to give East a 2-1 lead on Hathcock’s second wild pitch of the inning. Another run crossed on an error before Scott Sapp delivered a two-out, two-run smash single to left that made it 5-1. East’s final run on Hathcock’s next pitch — a fastball that Sam Wyrick laced to the gap in right-center.
Hickory Ridge went hitless over the final four innings, thanks largely to Johnson’s precision pitching. He retired 10 of the last 11 batters he faced before being spelled by reliever Joseph Peeler, who procured the final three outs and struck out two.
Caldwell and Wyrick each had two hits for the Mustangs, but when they rolled the closing credits Johnson’s name was listed first — in capital letters.
“I love catching him,” said Ritchie. “He makes my life easy.”
NOTES: Hathcock settled down and retired nine of East’s last 10 batters. … Peeler’s best work came after the game when he enlisted a few teammates to hold up placards requesting a classmate’s company at ER’s upcoming prom.