Connor gets monkey off his back 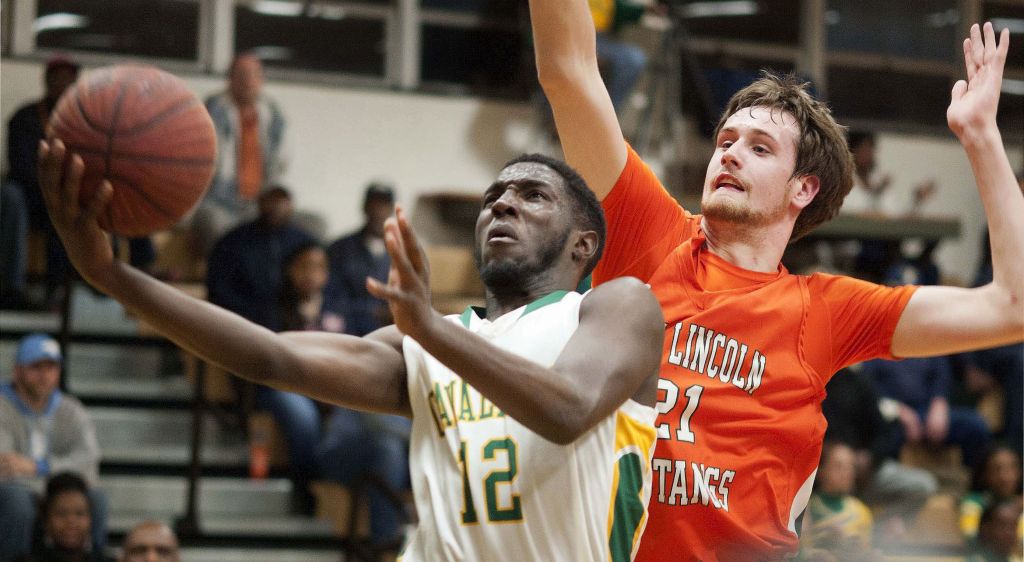 SPENCER — That monkey on Michael Connor’s back must have weighed even more than muscular teammates Michael Bowman and Alexis Archie combined, but it’s gone now.
Connor’s 17-point fourth quarter on Wednesday — a springy spree that included 13 points in two marvelous minutes — pushed North Rowan to a 65-62 victory against strong East Lincoln in the second round of the 2A playoffs.
Connor’s sensational career at North Rowan has included 1,073 points, but surprisingly few had come in the state playoffs.
“I was aware of that,” Connor said. “Very aware of it. The guys were joking around with me that I could do good in the regular season games but that I didn’t do well in the playoffs.”
Joking maybe, but the truth can cut deep.
North has enjoyed so much recent success — the Cavaliers are 97-18 the last four seasons under coach Andrew Mitchell — that the athletic Connor has had ample opportunities to shine on the biggest stages.
But for some reason, he had not.
North played six playoff games his freshman year, including the 1A state-title comeback in Raleigh against Pender. Connor’s contribution to that postseason run was a modest 28 points (4.7 points per game), as Sam Starks and Pierre Givens did most of the scoring damage.
North’s three playoff games in 2012 featured just 21 points by Connor, and his four-point outing against Monroe in a sectional-final setback was a dreary way to end a 25-4 season.
Connor’s junior year was mostly outstanding, but he was absent without leave at playoff time. He vanished like a magician had clapped his hands and sent him into thin air. He scored just five as North squeaked by Monroe and five more when North went down against Winston-Salem Prep in the regional.
Oshon West, T.J. Bates and Jalen Sanders did the heavy lifting in the battle with Prep, and Connor would be the first to tell you he didn’t play like Michael Connor.
Which brings us to 2014, and Connor’s last chance to get it done in the playoffs.
When he scored nine in a first-round win against Salisbury on Monday, it meant he’d accounted for 88 points in North’s 14 playoff games during his career. That’s 6.3 points per game. That not Michael Connor.
Prior to Wednesday, he’d scored in double figures only once in a playoff game, 12 in an early-round breeze against River Mill in 2011. But maybe he was just holding back and saving up.
North got some smart plays by Sanders, some big boards by Kenyon Tatum, Dalton Nelson and Michael Bowman, a key free throw from Paris Hillie, and lots of clutch stuff down the stretch from Alexis Archie, but the Cavs’ season would’ve ended in the second round if Connor hadn’t been extraordinary.
Connor made a 3-pointer in the first quarter and swished nother in the second as the teams battled to a 29-all standoff at halftime.
Connor was limited to two free throws in the third quarter, and it was a 47-47 deadlock when Sanders drove the lane with 3:56 left to play. Usually, Sanders, a talented sophomore, will try to finish in that situation, but he spotted Connor open in the left corner and made the instant decision to flip him the ball. That was the best decision of the night because that’s when Connor nailed a 3-pointer and that’s when Connor caught fire.
“I saw Mike and we needed a big play,” Sanders said. “We have confidence in Mike as a big-time player. He can make big plays.”
Connor stroked another 3 from the same spot to give North a 53-47 lead. Then with 2:34 left, the uncommitted senior drilled yet another trey to expand North’s lead to 58-49. With a committee of ballhandlers that included Connor, the Cavaliers were able to maintain their advantage even after Sanders fouled out.
“We played decent and it was an even game, but then No. 12 hit a bunch,” East Lincoln coach Neil Hodges said. “But that’s what the good players do. They step forward.”
Connor’s work in the fourth quarter included eight clutch free throws.
Known as a transition guy and a slasher, he defied the scouting reports. He scored 26 points without making a 2. He buried five 3s and 11 free throws.
North coach Andrew Mitchell was spent at game’s end, drained of emotion, filled with pride.
“We beat one of the best teams that’s been in this gym,” he said quietly. “I’m so happy for Mike Connor and so happy for all our seniors. This group understands you don’t talk to get something — you work to get it. They’ve done the work, putting up shots at the Y even after they leave practice, and you saw the results of all those shots tonight. All day Mike promised me a big game, and he came through.”
Connor is a sensational player, a county player of the year candidate. There’s never been any question about that. The nice thing now is he’ll be remembered not for those finals where he didn’t play well, but for playing the game of his life in his last home game — when his team had to have it.
“It was my last chance to play well in this gym,” Connor said. “I didn’t want to lose my last game here. Thank God for my teammates for giving me opportunities, and I tried to make the most of them.”
Connor did. He stepped forward in a way that will be remembered a long time.