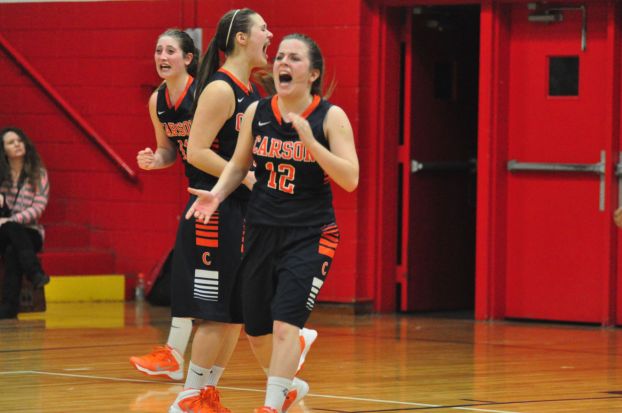 GRANITE QUARRY — Carson’s girls got an ovation after winning in East Rowan’s gym on Monday and had another one waiting for them when they returned as conquering heroes to China Grove to support their boys team.
Even 10 ovations may not have been enough for the 29th-seeded Carson girls. They aren’t tall and they aren’t quick, but they are in the second round of the 3A playoffs after they beat fourth-seeded East 48-45 in a wild one.
One former coach in the county watched Carson play this summer and felt badly for coach Brooke Misenheimer. She figured they’d be lucky to win a game. Now they’ve won 13, and they’ll shoot for 14 when they play at South Rowan, another neighbor and rival, on Wednesday.
“I have a lot of respect for East, they had a fantastic season, and they’ve got so much to feel good about,” Carson coach Brooke Misenheimer said. “But I’m just so proud of my girls right now. We had the right gameplan, but a gameplan doesn’t mean much if girls don’t buy in and execute it. They bought in. We made mistakes, silly mistakes, but we played so hard we overcame them.”
That’s been Carson’s theme all year — no one plays harder. Carson scorers Alex Allen and Kate Cole shot 7-for-24 and the Cougars were outrebounded 45-24, but they clawed and scratched and got on the floor.
Sydney Huffman led the Cougars’ offense with 15 points. Allen had seven rebounds and four assists. Cole hit three 3-pointers. Jordy Clark and Megan Gray did their thing on the defensive end and every loose ball was theirs.
East coach Danielle Porter knew their was a chance something bad would happen as soon as she saw the playoff brackets.
“We beat Carson for the third time this season in the SPC tournament, and to beat a team three times, you almost have to play the last card in the deck,” Portersaid. “Carson is just so familiar with us. They know our strengths. They know our weaknesses. To have to play them a fourth time in the first round was ludicrous, and I’d say that whether we won or lost.”
East mashed Carson twice in the regular season, with East’s 6-foot-4 senior Karleigh Wike pouring in 44 points. Carson battled East tougher in last week’s SPC tournament semifinal, but Wike and 6-3 Kelli Fisher combined to score 34 in a 56-49 East victory.
“But our girls left that game, not just knowing they could compete with East — but really wanting another shot at them,” Misenheimer said.
They got it.
Carson employed a funky defense, defending Wike, Fisher and point guard Jocelyn Lowe man-to-man, with the other two girls playing sort of a 1-1 zone. Wike and Fisher still got plenty of rebounds, but they didn’t get the easy weakside stickbacks the Mustangs thrive on.
That defense doesn’t work if East’s guards make shots, but the Mustangs (22-4) were 2-for-9 on 3s.
“We played very smart on defense,” Huffman said. “We finally played a defense that put pressure on their big girls. On offense, we didn’t shoot that well, but we moved the ball well and got good shots.”
It was a fight from beginning to end, as most Carson victories have been. Huffman and Clark got Carson (13-12) out of the gate, and Cole nailed a 3-pointer as the Cougars took a 13-9 lead after a quarter.
East fought back to 25-all at halftime, and Carson was getting in some awful foul trouble.
East led 35-34 after three quarters, but when Huffman scored inside and Cole hit a 3-pointer to open the fourth, the Cougars sprinted ahead by four points. Gray fouled out on the offensive end with 5:38 left and went to the bench in tears. At 5-6, she had battled furiously against Wike.
“That’s a big ol’ tree,” Gray said. “I just had to keep climbing. We just really wanted to beat them.”
Two free throws by Cole at the 3:39 mark pushed Carson’s lead to six, but East senior Lauren Thomas hit a clutch 3-pointer to slice the lead in half.
Wike fouled out with 1:01 left. She’d scored as she was fouled to cut Carson’s lead to 46-45, but then she missed the free throw and fouled trying to get the ball back.
Crishona Roberson and Allen made a free throw apiece for a 48-45 lead, and Cole had a chance to put the game away with two free throws. When Cole missed both, East still had a chance to force overtime, but Shenell Pharr’s 3-pointer bounded off the rim, and Clark collected the long rebound to seal victory.
“Brooke’s crafty and Carson played out of their minds,” Porter said. “It’s a hard pill to swallow.”
The Richmond-bound Wike ended a great career with 1,291 rebounds and 477 blocked shots, both school records. Her 1,170 points rank fifth all-time at East.
“A lot of things didn’t go our way,” Wike said. “I know we didn’t play our best, but I was still proud of my teammates. We fought to the end.”