North boys get input from all 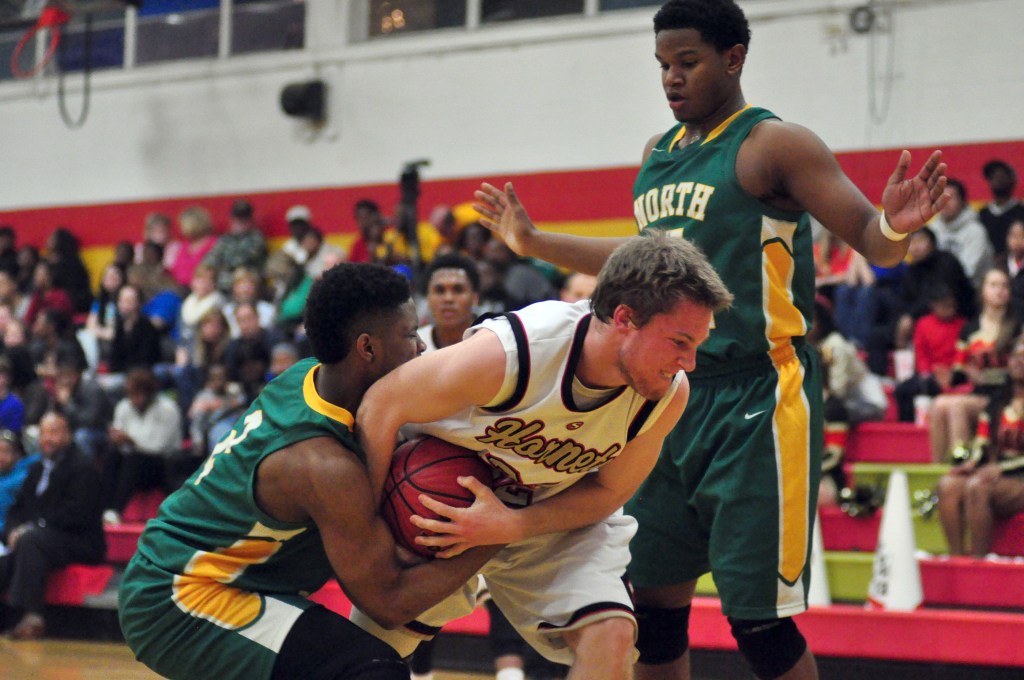 SALISBURY — Salisbury co-athletic director Dale Snyder should have handed out programs before the start of the boy’s game Monday night against North Rowan.
With the stars getting off to slow starts for both teams, reserve guys stepped up and played huge.
Fortunately for the Cavaliers, stars like Jalen Sanders, Michael Bowman and Michael Connor found their rhythm eventually to power North to a runaway 78-50 triumph to close out the regular season.
“To be able to come out and stay focused and get some rhythm and finally pull it out says a lot about the work the guys have put in,” North coach Andrew Mitchell said.
With his starting five only producing nine points in the opening six minutes of action, Mitchell yanked his starters for a whole new lineup.
Freshman Joe Scott took advantage of the minutes, hitting back-to-back layups to give the Cavs a 14-12 lead after one.
After Jeryon Davis drilled a trey to open the second, Dalton Nelson hit two in a row to put North up 24-19.
Salisbury cut it to 24-23 before the Cavaliers caught fire.
Connor beat the defense down the floor to jumpstart a 12-0 spurt as North began to pull away.
Bowman capped the 17-2 charge with a corner 3-pointer with time winding down to blow the game wide open at 41-25.
“That run was really key for us,” Mitchell added. “We now have nine or 10 people that we really trust. And every time we made a sub, we hit a run.
“We had planned to play in 3- or 4-minute spurts and that worked out pretty well for us to have 10 people go out there with fresh legs and to know what to do.”
North finished the half with nine players in the scorebook and none in double figures, all while still scoring 41 points. Salisbury had seven players score with none scoring more than four points.
“It’s great to have a group of youngsters buying in,” Mitchell added. “They are really, really pulling for each other right now.
“If we can stay that way and continue to gel, I like our chances throughout the playoffs.”
The Cavs never slowed down after the run, rolling to the comfortable victory to end the regular season in style.
“It’s real comforting to know that even though we have an off night, when the coaches need us to turn it on, we can turn it on and get the job done,” Sanders said.
North, which drew the top seed for the upcoming CCC tournament, now sets its sights on postseason play.
“We have the Sam Moir and the conference championships,” Mitchell said. “Now, we’re battling for the tournament, sectional, regional and state championships.
NORTH ROWAN (78) — Connor 13, Sanders 11, Bowman 10, Scott 10, Nelson 9, Handy 7, Tatum 6, Walker 6, Hillie 3, Archie 3, Billingsley.
SALISBURY (50) — Petty 9, Davis 8, Brown 8, Fazia 7, Rayner 6, Canipe 6, Alexander 4, Oats 2, Troutman, A. Yang, J. Yang.
N. Rowan 14 27 18 19 — 78
Salisbury 12 13 14 11 — 50