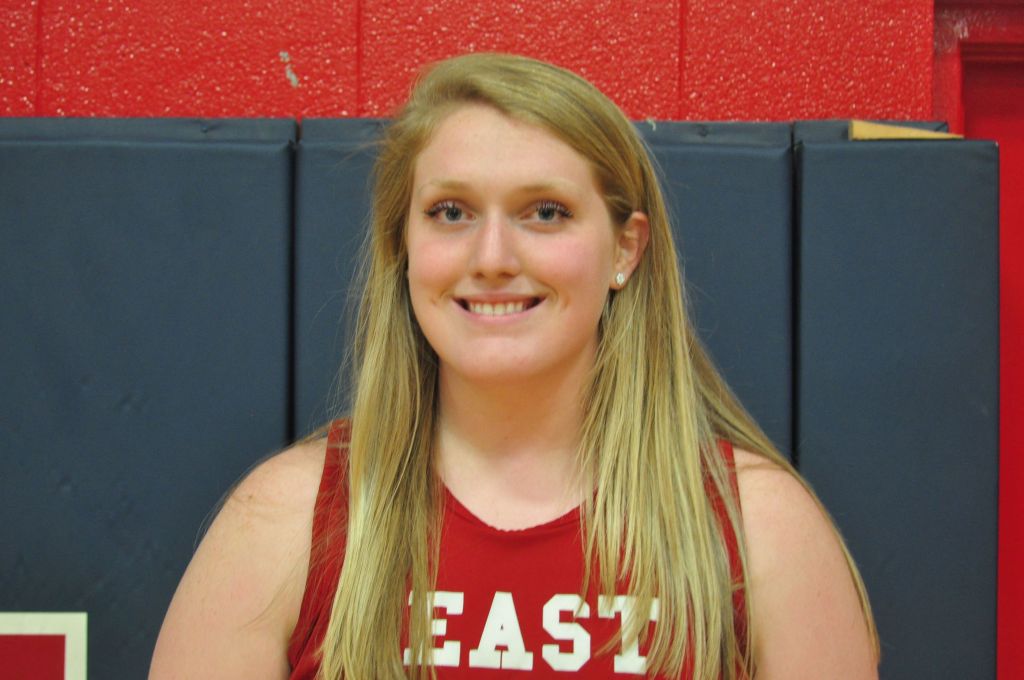 GRANITE QUARRY —
The East Rowan girls shook off the rust of a weeklong lay-off Friday night to muscle their way past Northwest Cabarrus, 69-55.
In a game much more competitive than the final score indicated, the Mustangs benefitted from a career high 26 points from junior center Kelli Fisher plus a solid defensive effort in the second half sparked by sophomore guard Shenell Pharr.
The win enabled East to maintain a two game margin in the South Piedmont Conference as they improved to 15-3 over and 11-1 in the league. The Trojans dropped to 5-11, 2-10 with the loss.
Just before the tip-off, East star forward Karleigh Wike (a Richmond commit) was recognized as a McDonald’s All American nominee. But the 6-4 senior found herself in serious foul trouble early on and was not a major factor, especially offensively, all night.
Fisher, a 6-3 junior, filled the void by scoring nine in the second quarter while Wike rode the bench. She then keyed a 12-2 run in the third period with 12 points and a couple of blocks to give East some critical separation from the Trojans.
The result was the career high 26 points plus 12 rebounds for Fisher, all of it in the paint.
“Karleigh is a big part of our team,” Fisher stated, “So whenever she is out I have to step up a lot and do my best.”
Fisher was being modest but she personally keyed the third period run when East took a slim 30-27 lead and turned it into a solid 42-29 margin. Her layup at the buzzer expanded the lead to 50-35 and East was in control the rest of the way.
“Kelli has been doing really well offensively for us,” East Coach Danielle Porter noted. “She was running her lanes offensively, doing a good job of positioning her body and really finishing at the glass.”
While Fisher was the constant inside force, sophomore guard Shenell Pharr came off the bench to provide a spark when the Mustangs needed it most.
East trailed most of the first period before going up 12-11 at the last second. They were clinging to a 23-22 lead late in the first half when Pharr scored on a fast break then nailed a long three pointer at the buzzer. The shot gave East a 28-23 lead and some needed momentum for the first time.
Pharr’s defense was the big plus as she produced four of the team’s 13 thefts and converted three of them into baskets in the second half. The effort produced a 16 point night for Pharr, tying her career high.
“I was mainly spotting the ball looking for opportunities,” Pharr said. “We have worked on defense a lot lately and going after the ball is one of the most important things.”
Both teams had been idle all week due to the winter storm and the coaches said it was a factor that affected the flow of the game.
“We had a great game plan,” Trojan coach Anthony Bethea stated,” But to be honest we only practiced about an hour last Monday and no more the rest of the week. We just came out and played this game and battled. I was proud of them.”
But he also noted that 14 missed lay-ups and 24 turnovers were too much for his young team to overcome against the talented Mustangs. NWC did hold their own inside against the taller East front line with 19 offensive rebounds and a number of second chance points by Ramesha Bennett, Joy Smith and Savannah Lambert.
NW CABARRUS (55) — Bennett 20, Smioth 12, Lambert 10, Grant 7, Holt 6, Broome, Williford, Wareham.
SALISBURY (69) — Fisher 26, Shenell Pharr 16, Wike 7, Ajayi 7, Thomas 4, Lowe, 3, Shenique Pharr 3, McCree 3, Benge.
NW Cabarrus 11 12 12 20 — 55
East Rowan 12 16 22 19 — 69