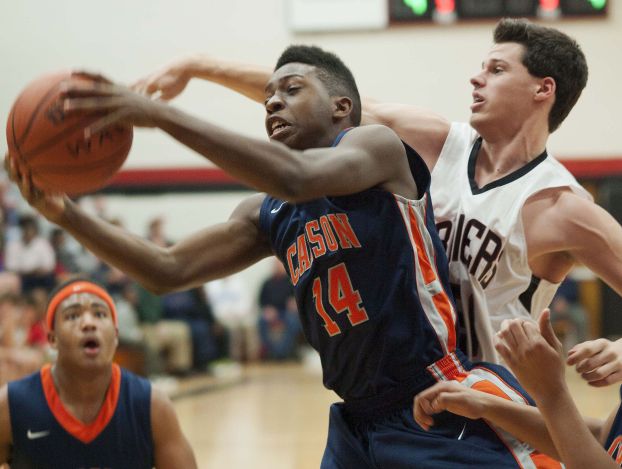 Carson bounces back from break

LANDIS — Maybe it wasn’t such a good idea to rule Carson out in the race for SPC boys basketball runnerup.
The Cougars looked the part Friday night when they held off South Rowan’s late charge and gained a stirring 67-61 victory.
“We hadn’t played in seven or eight days because of the weather,” senior Colton Laws said after Carson (12-6, 7-4) won its third straight conference match. “And we didn’t play 100 percent tonight. But we did enough to get the job done.”
South did nearly as much, trimming an 18-point fourth-quarter deficit to four with less than a minute to play. The Raiders (8-11, 4-7) hadn’t played or practiced in a week — and for much of the night it showed.
“You never knew what you were gonna get,” said SR coach Bryan Withers. “It was weird. We came out sluggish at first, but when we decided to be aggressive and attack the rim, I thought it made us a better team. I hope the guys saw that.”
Winning coach Brian Perry applauded the way Carson threw out more electricity than a downed power line.
“Especially in the second and third quarters,” he said. “But South played great in the fourth quarter. My god, they were getting to the lane and we were scared to help out because they had those shooters on the wing. Q was running away with it for a while.”
Q is South guard Qwan Rhyne, the junior who scored 14 points in the final period. Teammate Shawn Spry added 13 —all in the last three-and-a-half minutes — as the Raiders slashed and thrashed their way back into the game.
“We knew we had to push the ball if we wanted easy baskets,” Spry said after finishing with 22 points. “We were just feeding off of each other in the fourth quarter.”
South spent the first three quarters playing soft defense and swimming against the current. A pair of 3-pointers by Carson’s Jacob Raper and another 3-ball from Jonathan Rucker as the third quarter expired gave the Cougars a commanding 49-31 edge.
“We’ve been playing together the last few games,” said Tre Williams, Carson’s high-scorer with 19 points. “You know — looking to make the extra pass, helping out on defense when a man gets beat. Altogether, we’ve just been playing better team ball and that’s how we got the big lead.”
It all changed in the fourth quarter when Ryhne converted six consecutive free throws, then pulled up for a short jumper from the right side that shaved the deficit to 49-39.
“We started being aggressive and attacking,” he said after a game-best 24 points. “Once we felt the momentum changing we kept fighting.”
A couple of free throws by Laws with 5:40 to play stopped the bleeding, at least for the moment. A 3-pointer by South’s T’vadis Wesley made it 52-42 before Williams scored on a nifty, across-the-lane dribble drive. Midway through the quarter Laws scored on a fastbreak layup, converting a 40-foot pass from Williams.
That’s when Spry and Rhyne took center stage. Spry hit back-to-back shots, the second a 3-ball from the left side that pulled the Raiders within 58-51 with 2:16 remaining. Next Rhyne’s off-balance jump shot connected and it was 60-53 with 1:38 to go.
“Personally, I never got too nervous,” said Laws. “We stayed consistent over the entire game. Whenever they got a run we didn’t drop our heads. We kept playing our game.”
Perhaps the game-clinching play came with 1:25 on the clock when Williams took an inbounds pass from Raper and banked home a decisive shot. “It’s called a box screen,” Williams said. “My guy wasn’t paying attention so I posted up and rolled off for the layup.
“Everything feels all right right now,” he added. “We’re still working to get to the top.”
CARSON (67) — Williams 19, Laws 15, Raper 12, McCain 12, Rucker 6, Stout 3, Isom, Hower.
SOUTH ROWAN (61) — Rhyne 24, Spry 22, Wesley 6, Hill 5, Wilder 2, Childers 2, Rary, Holbrook, Goldston, Finger.
Carson 12 17 20 18 — 67
So. Rowan 10 11 10 30 — 61