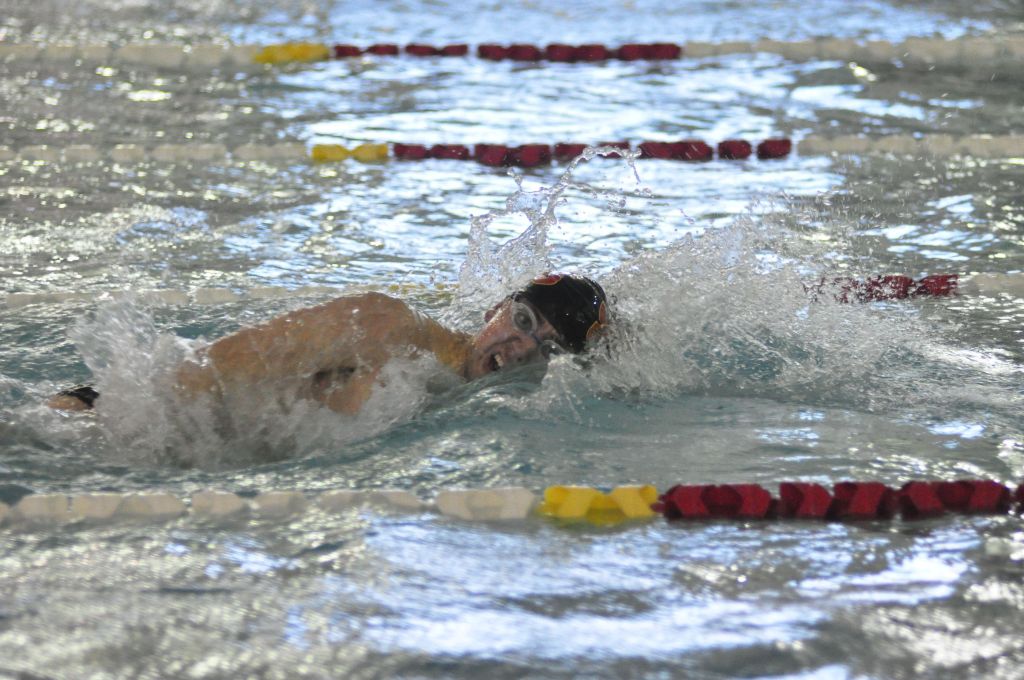 Lexington won solidly at Thursday’s Central Carolina Conference men’s swimming championships, taking seven of 11 events on the strength of standout efforts by Cole Riggan and Adam Wetherell.
But Lexington’s success did not hide the impressive performances of two Rowan County teams in a three-way battle for second place.
Starrett’s Hornets ultimately won that battle by four points over third place West Davidson, thanks in no small part to senior Taylor Rodenhuis. Rodenhuis was the spark for his teammates all afternoon, clobbering the field in the 200 freestyle before executing a solid win in the 100 butterfly. This is nothing new for the Hornet star. He was a state championships finalist in two events last season, so you might as well call CCC’s a warm-up. But it’s a warm-up he is happy to savor.
“I was happy with my times,” Rodenhuis said. “But our whole team did really well. I was happy about that. We dropped time in both relays [the 200 medley relay and the 400 freestyle relay.] I’m looking forward to regionals.”
Rodenhuis was right in his assessment of his team’s overall success. Nine different Hornets got in on the scoring throughout the meet. Andrew Mason performed well in his final conference meet. The senior sprinted to a pair of podium finishes, placing third in both the 50 free and the 100 free. Matt Woolly improved on an already outstanding season with a runner-up finish in the 100 breaststroke. Max Patel also did well, pacing Salisbury in the 200 IM by finishing third.
Patel, Woolly, Rodenhuis and Mason teamed up for second place finishes in both the 200 medley relay and the 400 freestyle relay.
The Hornets enjoyed point-earning races from five other swimmers, notably Josh Lasker and Miles Robinson. Lasker is much improved over last season and showed it with a 5th place finish in the 200 free. Robinson showed off his versatility with a fifth place finish in the 200 IM. He also joined teammate Seth McLendon in scoring in the 100 back. Cameron McLendon (seventh in the 50 free), Ryan Lasker (eighth in the 50 free), and Alex Whitaker (seventh in the 500 free) had strong swims for the Hornets also.
Hundley was pleased with her team’s performance. The Cavaliers were a close fourth place with 91 points.
“I think we did really well, given our size,” Hundley commented after the meet.
North certainly punched above its weight, beginning with sophomore Cody Dollarhide. Dollarhide finished second in the 200 IM to Lexington’s Cole Riggan, who Hundley described as a “beast.” The Cavalier star earned another runner-up finish in the 500 freestyle with a 5:41.
“He’s been stuck at 5:47 for a while,” Hundley said, happy with the progress.
Perhaps the biggest surprise of the day was Luke Miller, who finished the 200 freestyle in 2:19 at Tuesday’s Rowan County Championship, but cut six seconds for a 2:13 and third place on Thursday. For good measure, he added another bronze medal in the 100 backstroke, again cutting time.
In a race with perhaps a touch of rivalry, North’s Corey Fries had the swim of his life in the 50 free, breaking 25 seconds for the first time to finish with a 24.90, a second place, and a victory over Salisbury’s Mason (who finished third). Fries was also fourth in the 100 freestyle with another personal best.
NR’s Gage Jenson (sixth in the 50 free and fourth in the 100 breast) and Blake Pegram (sixth in the 200 IM and fourth in the 500 free) also did well.