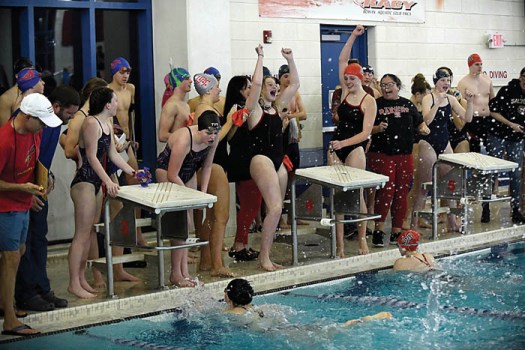 South girls, at right, cheer on their winning 400 yard relay team. photo by Wayne Hinshaw, for the Salisbury Post 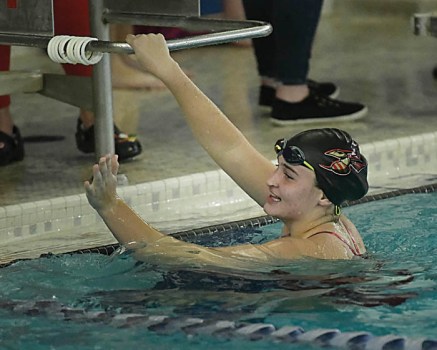 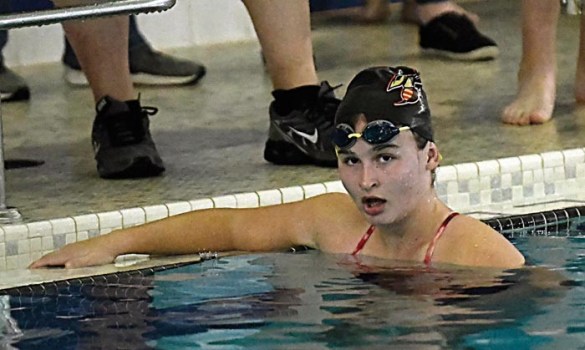 Salisbury's Kate Burton after the 20 yard freestyle., photo by Wayne Hinshaw, for the Salisbury Post 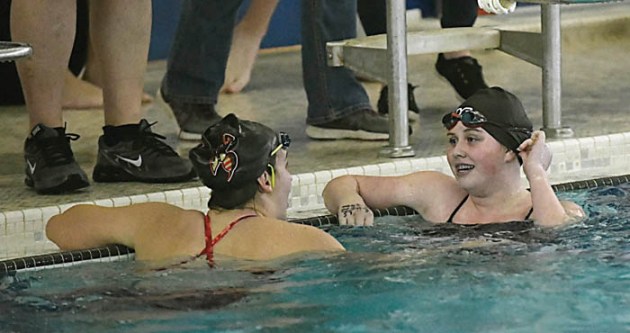 SALISBURY — What are the odds of having a Smockstad and a Rockstad on the same team?

Probably at least a million to one, but South Rowan’s girls swim team is happy to be that one in a million.

Audrey Rockstad swam on a relay winner, while RaElla Smockstad won the 100 backstroke at Tuesday’s Rowan County Championships at the Hurley YMCA.

It was a repeat triumph for South’s girls, who won the meet with 366 points. South won bigger this time than it did in 2021.

South has good numbers. That’s part of the reason the Raiders won their eighth girls swim championship, just one fewer than Salisbury, which has had a number of Division I swimmers.

But numbers are only part of South’s success.

“Our depth and numbers certainly do help us, but it was pure hard work and dedication that won this meet,” Franks said.

South swept the three relays — that’s where depth usually shows up. The relays are critical because they offer double the points of individual events.

Winning the 200 medley relay that kicks off every meet always matter a lot. That 200 medley victory by Audrey Weaver, Aiden Shepherd, Ava Blume and Sydney Hughes, started South’s momentum rolling toward another title. The SR quartet won the event by just four-tenths of a seconds over East.

“Sweeping the relays was a huge factor in getting a lot of points,” Franks said. “Seniors Sydney Hughes and Aubree Thompson had beautiful comeback swims that were crucial in winning those relays.”

Smockstad was South’s lone individual winner, but the Raiders had lots of seconds and thirds and so on. Even 12th place meant one point.

“We had seniors who had a great night for us, but we also had some young swimmers step up to the plate, swimming some new events, and get solid times in,” Franks said. “Ava Blume’s second in the 200 and Audrey Rockstad’s second in the 100 butterfly come to mind.”

“She’s extremely versatile,” East coach Amanda Trexler said. “As a freshman, she has already automatically qualified for four individual events for regionals and continues to help her team with relays. She works hard and impresses with her natural ability each meet. We are so proud of her performance, not only this meet, but all season.”

Salisbury’s Ava Morris was a double winner, taking the 50 free and the 100 butterfly, where she was followed by three South swimmers.

Kate Burton won the 100 free for the Hornets.

“We’ve had our sights set on county all year and our girls have worked hard to win another title,” Franks said. “I think a lot of people believe that swimming is an individual sport, but they proved that it takes a team to do big things. Right now, I’m one proud coach.”