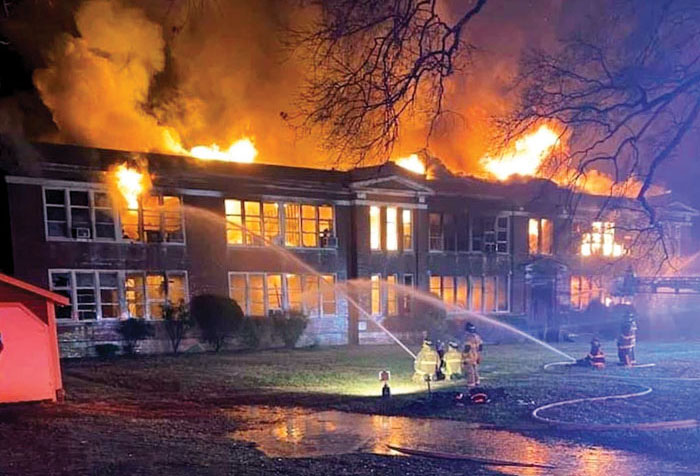 The former school and administration office on North Long Street was destroyed by a five-alarm fire on Saturday night. Photo by Jim Strillacci, for the Salisbury Post

EAST SPENCER — An intense, massive fire caused such extensive damage to a historic former school and administration office on North Long Street in town Saturday night that it has been determined a total loss, according to officials.

The fire started late Saturday afternoon and, even with response from three counties, continued to burn well into the night. Even into Sunday and Monday, hot spots continued to flare, and the basement was flooded. Investigators have still been unable to get into the building to determine where or how the fire started.

Sometime around 5:30 p.m. Saturday afternoon, neighbors and firefighters alike began smelling smoke along North Long Street, according to officials. A neighbor knocked on the door of the fire department, which is directly across the street from the former administration and school building, saying he knew there was a fire somewhere, but he was not sure where. Firefighters began searching for the source, and sometime before 6:30 p.m., smoke was spotted coming from the building across the street, at 110 North Long St.

A first alarm was called, followed quickly by a second, and by 7:20 p.m. a third alarm was issued. Heavy smoke and high flames were initially knocked back, then resurged through the center of the roof of the building before fanning out to both sides. As the building continued to burn, a fifth alarm was sounded and mutual aid from three counties arrived to help both bring water in tankers and help try to get control of the blaze.

According to East Spencer Fire Chief Shawn McBride, during the fire, hoses were connected to three separate hydrants and five tankers were hauling water to deliver to the supply pool.

“We were flowing thousands and thousands of gallons of water a minute using three aerial devices and hand lines,” he described. “When that amount of water is needed, it has the ability to restrict the town’s water source. This is the reason we have to haul water into the town, while using the hydrant system simultaneously. I applaud all members of East Spencer fire department for the job they do and for responding (Saturday) night to combat this fire. I applaud each county fire department that assisted us (Saturday) night as well. We do our best to provide service to the town of East Spencer with what we have.”

More than 100 firefighters were on hand to battle the blaze, and two ladder aerial trucks from Salisbury and Kannapolis were brought in to help in the attack. Traffic control by East Spencer police and members of the fire department kept North Long Street blocked off from traffic in both directions in front of the fire so fire apparatus could get in and out.

The building, which is on a four-acre parcel across from the fire department and town hall/police department, was originally built as a single-story structure in 1903 as a grade school. In 1921, the current building, a “classical revival” style was built. The town purchased the building in 2016, and in 2018, it was added to the National Register of Historic Places. The town eventually sold the property to a private investor. The building has housed several offices during its lifetime, including the Rowan Museum and the RSS administration offices. At the time of the fire Saturday, it was vacant. So far, it appears no one was in the building at the time of the fire, and there were no injuries reported during the incident.

The fire was essentially under control by about 11 p.m., but the fire was not out. Even Sunday into Monday, hot spots were still blazing up. Firefighters from East Spencer remain on scene, keeping watch and flowing water when needed.

Fire investigators have not yet been able to get inside the main building to try to determine where the fire started or what caused it. It is also not yet clear if electrical service and gas had been turned off in the building or if it was still connected at some meter. The basement of the building is reportedly flooded right now, and the structure is not sound enough for entry by inspectors.

“It’s a total loss on the main building, but we were able to save the building in the rear,” said McBride.

“It’s unfortunate that the building was completely destroyed,” said East Spencer Town Manager Michael Douglas. “I know the current owner wanted to build senior living quarters in the portion of the building that burned, but preliminary reports indicate the structure will need to come down. We certainly supported his plans and hope that he will come up with a new plan. We as a community feel the tremendous historic loss, but we also are choosing to look forward to what we hope can still be a bright future for the property.”

The neighbors who live in the house next door to the building, whose garage is extremely close to the facility, were concerned for a time Saturday night as sparks from the burning building wafted through the sky. In addition, a few branches of massive trees nearby were trimmed to keep the fire from spreading. One firefighter said it was fortunate that there are no leaves on the trees right now.

Many in the community who were following the fire on social media Saturday night had memories of the building, ranging from family members having attended school there to attending meetings or events, inside and out.